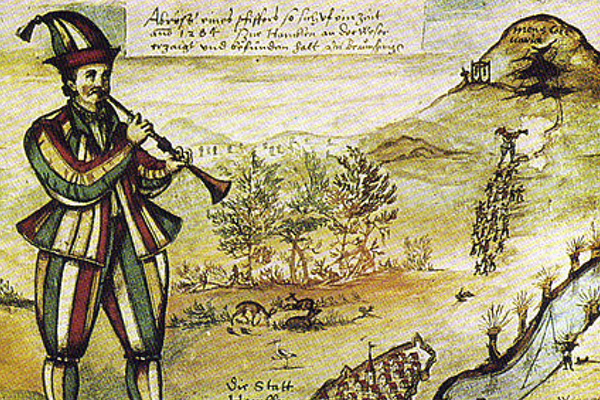 David P. Barash is professor of psychology emeritus at the University of Washington. His most recent book is Threats: Intimidation and its Discontents (2020, Oxford University Press).

A widespread tale out of medieval Europe involved the Pied Piper, a figure who arrived unexpectedly at the village of Hamelin and piped an alluring tune, thereby inducing the local, resident rats to follow him out of town, whereupon they drowned in a nearby river. A well-known variant on this story goes on to note that the Piper had been promised payment for his services, but when the town reneged, therefore failing to “pay the Piper,” that magical, musical manipulator later returned and led Hamelin’s children out as well; they, too, never returned.

Given the deadly consequences of believing Mr. Trump’s lies and false assurances, it is more than a little tempting to see him as a modern-day Pied Piper, whether one envisions his followers as rats or — more generously — as children. Not coincidentally, perhaps, Mr. Piper was initially welcomed by Hamelin’s human residents because the town had been suffering from a plague … although the mythic medieval Piper (unlike the very real 21st century president) did in fact undo the plague.

Donald Trump as Pied Piper is, admittedly, a speculative stretch. But one of the strangest aspects of the current pandemic has been the denial practiced by so many of its victims — not to mention the extent to which this denial has often contributed to the victimization itself. Stranger yet is that this denial includes not only people who haven’t contracted the virus or know anyone who has, but even many who actually test positive. Even more astounding is the degree to which said denial has permeated the attitudes of some who refuse to accept the reality of their situation, even as they are dying of it. This denial is not “merely” a refusal to acknowledge their own impending death (not in itself uncommon), but an insistence that the cause isn’t COVID because that isn’t a genuine, life-threatening disease but rather, a hoax dreamed up by political liberals seeking to undermine the presidency of Donald Trump.  Strange indeed.

As quoted in The Washington Post of November 16, Judy Doering — an emergency room nurse in South Dakota — said that she has cared for patients entirely reliant on ventilators in order to breathe, and who nonetheless insist that they don’t have COVID-19 (which has now claimed the lives of nearly 250,000 Americans … and counting).  “I think the hardest thing to watch,” Ms. Doering told CNN, “is that people are still looking for something else and a magic answer and they do not want to believe COVID is real. Their last dying words are, ‘This can’t be happening. It’s not real.’” They swear, literally with their dying breaths, that they must have pneumonia or some disease rather than COVID-19. And why? Because President Trump said that the virus was going away, that the country had turned the corner, that it doesn’t hurt otherwise healthy people, that it was at most a minor inconvenience, and that it wouldn’t be encountered any more after election day, November 3, because the whole thing had been ginned up by Democrats and the “deep state” to do him political harm.

The tragic fact remains, however, that COVID-19 is currently killing roughly two Americans per minute, and many of these victims go to their deaths having followed their Pied Piper — President Trump — in a manner that makes that medieval story painfully real.

Insofar as there is any potency to the parallel, it raises the question as to the possible underlying psychological mechanism. At least one contributor is likely very old— part of our primate evolu­tionary history. In his book, Alpha God, evolutionary psychologist Hector Garcia has pioneered the assessment that monotheism itself is a derivative of Homo sapiens’ deep-seated tendency to defer to an alpha male, thereby ensconcing God as the dominant leader, endowed with such predictable qualities as large size, great power, intolerance of competitors, sexual jeal­ousy, and the supposed ability to provide benefits to His faithful followers.

Garcia revisited this territory in his book Sex, Power and Partisanship, showing how the trope of Democrats as the “mommy party” and Republicans as the “daddy party” helps make sense of our current partisan divide, while illuminating how our evolved psychology plays into the impact of threat, fear, and anger upon political orientation. In times of stress those especially affected find themselves attracted to political leaders and platforms that promise authoritarian certainty, including a vigorous, uninhibited, and even potentially violent response to those individuals and circumstances regarded as threatening.

Human nature and its enabling hardware changes at a biological snail’s pace whereas cultural circumstances gallop ahead, largely untethered from our slow-moving evolu­tion. As a result, we are likely stuck with a kind of zombie psychology that staggers along, frequently out of touch with current needs and situations. There was a time in our Pleistocene past when alpha males, despite their fierce despotism (and in some cases because of it), were an asset, especially when dealing with outside enemies, and maybe to quell personal disputes within the group. But that was a long time ago. Current presidents don’t stand in the fighting vanguard, huffing and puffing and blowing the other guys down.

Our species’ susceptibility to leaders’ theatrics nonetheless remains deeply entrenched, a long-ago asset now turned liability that is all the more evident when politicians effectively stoke our fears, exaggerating the seeming threats, all the while thumping their chests and proclaiming themselves the best, the most, and maybe even the only genuine alpha creatures this side of God.

In Why People Believe Weird Things — one of the most insightful and important books of the early 21st century — Michael Shermer (guru of scientific skepticism, with a psychology PhD) identified five cogent reasons for that particular human susceptibility: Need for prompt gratification, for consolation, for moral closure, for satisfying simplicity, as well as our predisposition for hope, especially in dark times. Perhaps another should be added: A tendency for at least some of us, under some conditions, to follow a Pied Piper who masquerades as a savior-seeming alpha male, whatever the consequences.