Presidents Lie About Their Health More Than Any Other Subject 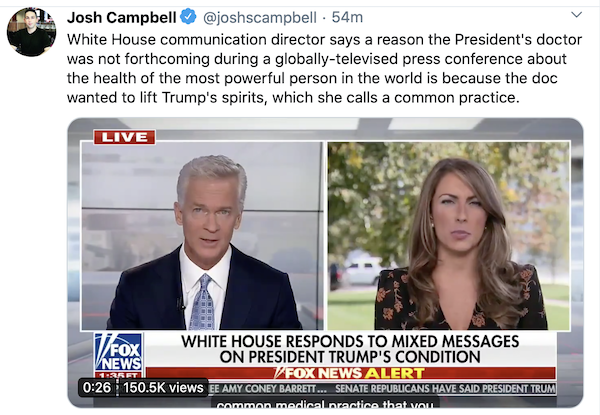 This blog post was written by Rick Shenkman, founder of George Washington University’s History News Network, and the author of Political Animals: How Our Stone-Age Brain Gets in the Way of Smart Politics (Basic Books).

The Trump administration has so little credibility that when it was announced that the president and first lady had tested positive for COVID-19 the first reaction of many people online was whether it was true or not.  My Twitter feed filled with tweets explaining that Trump probably just wanted to distract voters from his unhinged debate performance.  Some added that Trump would use a miraculously quick recovery to prove he’d been right all along that the disease is little worse than the flu.

It quickly became undeniable that Trump had contracted the disease, but people were right to question the administration’s story and not just because Trump has a well-deserved reputation for prevarication.  My research shows that the single issue presidents have lied about the most is their health. They lie for three reasons.  One, presidents believe their health is their own business and should be kept private.  Two, they worry that an admission of physical weakness will become a metaphor for political weakness.  Three, they fear (rightly) that their illness will quickly become the dominant political news, damaging their ability to control the political agenda; every minute spent discussing the president’s health is a minute people won’t be talking about what the president wants them to.

Until the 1880s no president lied about their health.  This wasn’t because they held themselves to a strict standard of truth-telling out of reach of their successors.  It was because reporters didn’t ask them questions about their health.  Thomas Jefferson frequently suffered from diarrhea during his two terms but nobody reported this.  Andrew Jackson was in near-constant stomach pain.  But it never occurred to the press to quiz him about this even though it was well-known that he often felt ill.

Everything changed on July 2, 1881.  That day as he was heading to catch a train out of Union Station for his summer getaway in New Jersey President James Garfield, just four months into his term, was accosted by a deranged man who’d been denied a civil service job and shot.  What happened next was wholly unprecedented.  As Garfield struggled to survive over the coming weeks the press began issuing hourly bulletins about his condition.  The papers flew off the presses.  It turned out that there was an enormous public appetite for health news about presidents.  By the time the president finally succumbed — four months later — the American media had changed. From then on the health of the president was considered a suitable subject for public debate.

Reporters did not have to wait long before another president’s health became a public concern.  Garfield’s successor, Vice President Chester Arthur, soon developed Bright’s disease, a then-fatal kidney disorder.  Reporters who followed him around noticed that his neck began shrinking and his shirt collars seemed loose.  Arthur suddenly began taking long trips to remote places like Florida where he’d be out of touch for long stretches.

This is when the lying began.  As soon as reporters began asking questions about his health Arthur began lying about it.  He maintained the lie right through the end of his presidency. He died less than a year after leaving office.  He was fifty-seven.

The next president to fall seriously ill was Grover Cleveland.  Just before July 4th 1893 he discovered that something was wrong with his jaw.  When doctors investigated they discovered that he had cancer on the roof of his mouth.  They quickly determined that he required an operation to remove the contaminated tissue.  Because Cleveland was obese the surgeons feared for his life.

Just then the country was slipping into a deep recession.  Cleveland worried that if the news got out about his illness the uncertainty about his health would aggravate the markets.  Cleveland, a backer of hard money (he believed the currency should be backed by gold) inspired confidence in bankers.  His vice president, however, believed in a loose monetary policy favored by broke and heavily indebted farmers.  Were Cleveland to die the soft money silverites in the Democratic Party (who believed the currency should be backed by silver) would be in a position to weaken the currency.

So Cleveland, who had a reputation for honesty, lied.  On July 1st he set off in yacht for his surgery and told almost no one, not even the vice president.  He spent the summer out of the public eye at Cape Cod recovering. When reporters asked after him he sent out an administration official to lie.  One reporter asked specifically if Cleveland had cancer.  No, was the answer.

The Cleveland story took a fascinating turn after he’d recovered and gone back to work.  One of his surgeons made the mistake of thinking, now that the president was well, that it was ok to tell the truth.  A front page story was published in Philadelphia in a major paper relating each of the important details of his operation based on an interview with the surgeon.  The Cleveland administration said the account wasn’t true and the story was forgotten.  The truth wasn’t confirmed for decades.

In the twentieth century presidents continued to dissemble.  Woodrow Wilson concealed the stroke he suffered in the White House after a grueling train trip across America to sell the Versailles Treaty, failing even to keep his vice president apprised of his true condition.  Infamously the first lady basically ran the government.  Wilson never copped to the deception though he remained partly paralyzed for the rest of his life.  (Incredibly he thought he should run for a third term.  Advisors talked him out of it.)

Franklin Roosevelt, to his credit, admitted that he had contracted Polio after his run for vice president in 1920, but routinely minimized  his illness.  Though he never recovered the use of his legs — he told a friend it took him a year to learn how to wiggle a toe—he deviously conspired with aides to leave the public with the impression that he had staged a complete recovery.  Photographers were even forbidden from taking pictures of him getting into or out of a car. In that more naive time voters never caught onto the truth.

Dwight Eisenhower similarly concealed his health issues.  A couple of years before he ran for president he spent about a month in the hospital but never publicly said a word about it.  Some historians surmise he was bedridden after suffering a heart attack. In 1953, just months into his first term he was giving a speech following the death of Joseph Stalin when he suddenly felt faint.  To keep from falling over he gripped the podium as he struggled to finish.  He sent his press spokesman out to say the president was suffering from indigestion.  More likely, it was a mild heart attack.

Two years later he was in Colorado playing golf when he again was taken ill.  This time there was no denying he’d had a heart attack, but even then the administration was slow to admit it.  In 1956 on the eve of his second run for president he suffered a severe case of abdominal pain.  The diagnosis was Crohn’s disease.  Ike was hospitalized and operated on.  This time the public was given a crystal glass account of his illness, including detailed drawings of his intestines.  Ike recovered quickly and went on to win in a landslide.

Eisenhower, who was seventy years old when he left office, was followed by John Kennedy, who was forty-two.  JFK was believed by the voters to be in perfect health, save for a bad back.  This was a lie.  At the Democratic convention in 1960 his chief rival, Senate Majority Leader Lyndon Johnson, revealed that Kennedy suffered from Addison’s disease, a debilitating adrenal glands disorder.  Kennedy flatly denied the charge and went on to win the nomination.  As president he dealt with a variety of illnesses including severe back pain, which he dealt with by taking a cocktail of powerful drugs.  Though voters knew he had a bad back they were led to believe he was supremely fit.  Pictures of him playing touch football with his family circulated widely.

Toward the century’s end there was the assassination attempt on Ronald Reagan, which the public was able to see on film.  Within hours the administration leaked a story that the president had joked with his surgeons that he hoped they were all Republicans.  What the public was not told was that Reagan had lost so much blood that he almost died.

What this potted history of presidential illness shows is that presidents and their aides feel free to engage in deception when the subject involves their personal health.  This is true of both Democrats and Republicans.  It is worthwhile remembering this history now that another president has taken ill.  No one aware of these facts can blithely assume that the Trump administration is giving us the straight story.  If two of our most honest presidents, Cleveland and Ike, could lie in these circumstances, it has to be assumed unless proven otherwise that our most dishonest president can as well.