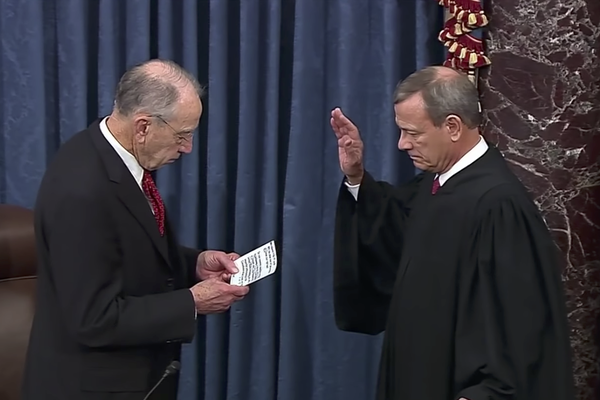 As the Senate impeachment trial of Donald Trump looms, many aspects of the trial are still undetermined. Will the parties call witnesses? How long will it last? How seriously will Senate Majority leader Mitch McConnell take it?

Salmon P. Chase, Chief Justice from 1864-1873, and William Rehnquist, Chief Justice from 1986-2005, both faced great pressures as presiding judge over the highly partisan impeachment trials. Neither one would be considered noncontroversial in his career, but both had the responsibility to uphold the Constitution at times of great turmoil, and both did so, after an early period of controversy around Salmon P. Chase.

Salmon P. Chase’s career reflected the realignment of political parties in the mid nineteenth century. He was a member of the Whig Party in the 1830s, the Liberty Party of the 1840s, the Free Soil Party from 1848-1854, the Republican Party from its founding in 1854 to 1868, and finally, the Democratic Party in the last five years of his life, while still serving as Chief Justice by appointment of Abraham Lincoln.

Chase helped recruit former Democratic President Martin Van Buren to run as the Free Soil Presidential candidate in 1848; helped found the Republican Party on the same principles of antislavery activism; sought the Republican nomination for President in 1860 before Lincoln was selected by the Republican National Convention; and he sought the Presidency on the Democratic Party line in 1868 and the Liberal Republican line in 1872 while still serving as Chief Justice.  He had a varied career as Ohio Senator (1849-1855), Governor (1856-1860), and Secretary of the Treasury under Lincoln (1861-1864).

Chase attempted to establish the concept of unilateral rulings on procedural matters during the early days of the trial of Andrew Johnson, but he was overruled by the Senate majority, controlled by Radical Republicans, and quickly gave up trying to control the trial. He moved toward neutrality and simple presiding as the trial moved forward after early turmoil.

William H. Rehnquist could not have been more different than Salmon P. Chase in his political leanings.  As far “left” as Chase was in his times, Rehnquist was far ‘right”, starting his political career as a legal advisor to Republican Senator Barry Goldwater in his failed campaign for President of the Arizona Senator in 1964.  Rehnquist was appointed Assistant Attorney General of the Office of Legal Counsel in 1969 by President Richard Nixon.

Nixon nominated him for the Supreme Court in late 1971 and he was confirmed and sworn in the first week of 1972. Rehnquist served nearly 34 yearson the Court and was elevated to Chief Justice in 1986 by President Ronald Reagan. He was regarded as the most conservative member on the Warren Burger Court and was one of the most consistently conservative Justices in modern times. Rehnquist recused himself from participating in the US V. Nixon Case in 1974, where the President was ordered to hand over the Watergate Tapes to the Special Prosecutor Leon Jaworski, leading to Nixon’s resignation on August  9, 1974.

Presiding over the Bill Clinton Impeachment Trial in the Spring of 1999, Rehnquist chose to  limit any attempt to influence the trial that was being promoted by a strong conservative Republican leadership in the House of Representatives, led by Speaker of the House Newt Gingrich and House Judiciary Committee Chairman Henry Hyde.  Despite his strong conservative credentials, Rehnquist managed always to get along well with his Supreme Court colleagues, and there were no controversies about his handling of the Clinton Impeachment Trial.

Now, Chief Justice John Roberts, who clerked for Rehnquist in 1980-1981, is faced with the same challenge of presiding over a highly charged impeachment trial.

Roberts worked in the Ronald Reagan and George H. W. Bush Administrations in the Justice Department and the Office of White House Counsel, then as Principal Deputy Solicitor General,followed by private law practice before his appointment to the DC Court Of Appeals by George W. Bush in 2003.  In 2005, he was nominated to replace the retiring Associate Justice Sandra Day O’Connor, but before hearings could begin on the nomination, Chief Justice Rehnquist died. Roberts was then nominated to replace Rehnquist.

Roberts has been very clear in his desire to run a Court that has the respect and regard of the American people, and while he has a strong conservative judicial philosophy in his 14 plus years on the Court, he has also come across as having a willingness to work with the Supreme Court’s liberal bloc, and is seen as the “swing” vote on the Court since Associate Justice Anthony Kennedy retired in 2018.

He has surprised many liberal commentators with some of his votes, including the preservation of “ObamaCare.” He is seen as comparatively more moderate and conciliatory, and he has been somewhat critical of utterances by President Donald Trump regarding bias of Justices appointed by Presidents Bill Clinton, George W. Bush, and Barack Obama.

It is clear that Roberts wants to have a good historical reputation as only the 17th person to head the Supreme Court, and while he will work to avoid controversy in the upcoming Trump Impeachment Trial, he will wish to preserve respect for the Constitution, democracy, and the rule of law, and will be the center of attention in the coming weeks and months.