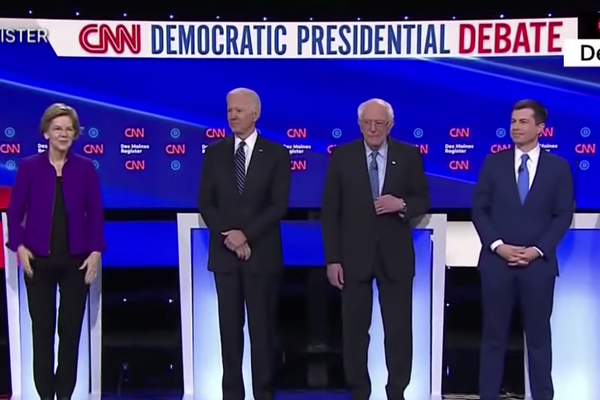 Twenty-eight Democrats put their names in to run for President. Now only 12 are left, most of whom have little chance. Why have some candidates survived, while others had to drop out?

First, please note that the above paragraph is not actually correct. In fact, at least 305 people have registered as Democratic presidential candidates for 2020, along with 153 Republicans, 53 Libertarians, and 22 Greens. The great majority are not serious contenders and won’t appear on any ballot. They have no chance, because the media pay no attention to them, so we have never heard of them. They attract no campaign funds, so only the Federal Election Commission, with whom they filed their papers, knows their names. It might be interesting to examine this long list to see who takes this step and why.

How did the 28 racing Democrats become “12”? Or maybe it’s really only the 6 who will debate tonight in Iowa. But beyond the 6 stands Michael Bloomberg and $1 billion.

So this is complicated. I’ll say up front that I mined information from these places: Politico’s site about all the polls among Democratic candidates over the past year through December; nice charts of the ups and downs in the polls of most of the candidates at Real Clear Politics and Wikipedia; the constantly updated New York Times story about all the candidates, in and out; an enormous amount of facts about the Democratic debates at Wikipedia.

It’s been confusing, but delightful to see so many serious and skilled people with the most diverse identities making a serious run at the Presidency. There is nothing like it anywhere else in American history or in American politics today. I’m trying to reduce my own confusion here, and this is longer than I usually write.

Many of the Democrats had little name recognition beyond their own state:

Three similar candidates managed to qualify for the first or second debate, but it made no difference:

Several who remain officially in are also mostly unknown to Americans outside of their own states, where the heavy weight of the 2020 campaign has not yet landed:

In December, over 30% had still not heard of them. Tulsi Gabbard might appear to be a different case, since she got to the 5th debate, while Bennett and Delaney didn’t debate after July. Perhaps the controversy she caused by some unorthodox foreign policy positions and a history of anti-gay advocacy attracted a bit more attention and funding. But she peaked at 2% in national polls in December, where she remains, and she has already had her last debate. Of those who had heard of her, more than half had an unfavorable opinion.

Only one other candidate had underwater favorability ratings from those who knew of her: Marianne Williamson. If Gabbard was unorthodox, Williamson came out of left field. Her political history consisted of an unsuccessful run for Congress in California in 2014. She is not a politician, but a very successful author, self-help guru, and political progressive. She came at this campaign from the side, and always stood out among her rivals, all politicians. She wants to cure our spiritually diseased society with love. Williamson only debated twice and then her continued inability to get over 1% in any polls doomed her ability to shift American politics toward feelings.

This uniquely unfavorable polling data for Gabbard and Williamson could have an explanation in today’s hot question: can a woman get elected President? At the moment Bernie Sanders and Elizabeth Warren are heading toward a disastrous he-said no-he-didn’t confrontation on that question, that adds charges of lying to charges of sexism. I’ll interrupt the flow of candidate data to say that I don’t think it is automatically sexist to believe that a woman can’t win in 2020, or to say it. Nobody denies that Clinton’s gender hurt her vote in some way. How many of those disinclined to vote for a woman in 2016 have changed their minds? This is a legitimate question for discussion and each answer, yes or no, deserves to be heard. Sanders might know something about American voting patterns that would make his judgment about whether a woman could win useful.

I happen to favor Elizabeth Warren, and I constantly hear and see opinions that she can’t win, because a woman can’t win. But that takes us back to unfavorability. It might be that a dose of sexism raised the unfavorability ratings of Gabbard and Williamson. Kamala Harris also had notably high unfavorability. But in the latest poll this month, Warren and Sanders had the best favorable to unfavorable ratios among all candidates. That ratio appears to me to be quite stable. As new people learn about a candidate, the favorable and unfavorable piles grow at the same pace. It may be that the incessant scrutiny of Warren’s personal impression on voters, as opposed to chuckles at Sanders’ angry old man cuteness thanks to Larry David, displays media stereotyping. Voters appear to have gotten beyond this.

To get back to the list: some candidates did succeed in gaining national attention.

Beto O’Rourke had a national reputation as former Congressman from Texas and a losing Senatorial candidate a year ago, but he could not repeat the magic of that campaign. He never got beyond that hurdle of 2% in national polls, below which so many candidacies failed. Kirsten Gillibrand and Bill de Blasio, Senator and Mayor from New York, were probably better known than the western Congressmen and Governors who dropped out early, but they also went nowhere. She, and especially he had too many people who disliked them. Julián Castro won election 3 times as mayor of San Antonio, then served 3 years as Secretary of Housing under Obama. He did well in the first 4 debates, but ended up under 1% in polls and dropped out last month.

Among the many sitting Senators who got into this race, three were able to stay in the race in the second tier:

Their names were broadly known, especially the first two. They all participated in the first 5 debates from June through November, creating clear campaign personalities. And they all remained in the second tier, except for a brief breakthrough for Harris reaching third place and 15% in July. Then she fell precipitously to below 5% in December and dropped out. Neither Booker nor Klobuchar have been above 3% since July, but they hung on. Booker just dropped out and Klobuchar remains in, but I don’t see much hope for her. All the latest state polls have her at or below 4%, except for Iowa, where she is counting on her Midwestern roots to move her up in the field. But even there, she only gets 6% to 8% in fifth place.

On Monday, Booker dropped out. Tuesday’s debate had only white candidates. The winnowing of a historically diverse field of candidates to fewer all white debaters was not due to Democratic National Committee debate rules or to black candidates’ inability to raise funds. The choices of black Democrats made the difference. In November, black voters preferred Biden, Sanders and Warren, with only 2% for Kamala Harris and under 1% for Booker. The Washington Post-Ipsos poll in early January confirmed what had been obvious since the beginning of the campaign. Joe Biden is the most popular choice among black Democrats, at 48%, concentrated among blacks over 35. Bernie Sanders is second at 20%, Elizabeth Warren at 9%, Booker at 4%. Even as a second choice, Booker could get only 8%. Booker could only get third place as best able to handle issues important to blacks, but most significant, only 2% thought him best able to defeat Trump.

Deval Patrick, two-term Governor of Massachusetts, considered opening a campaign in 2018, decided against, then jumped in three months ago. But he got less than 1% of black voters in January, a bad sign.

Michael Bloomberg, the billionaire former mayor of New York, has become a wild card in this race. He had been talked about as a presidential candidate every election since 2008. He registered as a Democrat in October and opened his campaign in November, too late for the earliest primaries in Iowa and New Hampshire. He is financing his own campaign, so he will not meet the donor thresholds for participation in the debates. He is better known across the country than any of the candidates except the top 4, and has risen suddenly in polls to tie Pete Buttigieg for 4th place. Can he go higher? Maybe not much, because he is viewed more negatively than anyone else among the top 10 candidates.

Tom Steyer is another billionaire who said he wasn’t going to run, then changed his mind, and began a campaign in July. In October he was only known to 64% of those polled, like the many candidates who dropped out, but that had climbed to 71% in December, and 75% this month. He is polling at or below 4%, but he appears to be rising, and is staying in. Billions buy ads, and I have seen a number of them, even in Illinois, so he is becoming better known.

Steyer and Bloomberg demonstrate the necessity of money, lots of money, for American politicians, especially presidential candidates. Billionaires represent .0000003% of the US population, but 2 out of 12 remaining Democratic candidates and 1 (guess who?) out of 3 Republicans.

Andrew Yang is also in a category by himself. He is a tech entrepreneur and author, who has never run for public office. His signature proposal is that the government fund a universal basic income of $1,000 per month for all Americans. His focus on the economy and his unique persona have brought him a devoted following and much media attention. He qualified for all the debates until tonight, where he misses some of the polling qualifications. He ranks above politicians like Klobuchar and the billionaire Steyer, but at 5% he doesn’t yet threaten the leaders. He ranks sixth in all states but California, where he is fifth.

What about the top 4? Amidst all these comings and goings, the top 4 have remained pretty firmly in place. Joe Biden has been leading the whole time, but in the most recent polls has fallen to just under 30%. He also led in nearly every state poll, except for the most recent Iowa poll, where Sanders beats him. Bernie Sanders seems locked in second place, but he has narrowed the gap in national polls from about 15 points to 6 points in the latest poll. He is competing for the more progressive voters with Elizabeth Warren, who seemed to pass him in September, but has fallen back to third since then. Pete Buttigieg has been in fourth place for months, briefly jumping up over 10% in December, but falling back to 8%-9% now. He may also see hope in Iowa, where he does better, but in states with significant black Democrats, he does poorly.

Looking toward the next few months, the New York Times shows us how much money each candidate has collected and how much media attention they get. The top 4 have each collected more than $35 million, with Bernie leading at $61.5 million. They also get the most media attention. Everybody else is far behind in contributions, all under $16 million. Bloomberg occupies a peculiar position, since he has collected no contributions for his entirely self-funded campaign, yet ranks 5thin the national polling average at 5%. Steyer also has elevated himself from the pack of also-rans, by qualifying for the January debate, as he did for the December debate, through heavy advertising in the early primary states.

Tuesday's debate may shake things up, but that seems unlikely to me. The next important moments will be the caucuses in Iowa on February 3 and the primary election in New Hampshire on February 11, two of the whitest states in the US. Caucuses in Nevada and an election in South Carolina follow later in February, with much more diverse populations. After these contests, the projections and predictions will multiply, with a much firmer basis. Losers will drop out and their supporters will look for a new home. I think the tug of war between the progressive and moderate wings of the Democratic Party will continue into the summer.