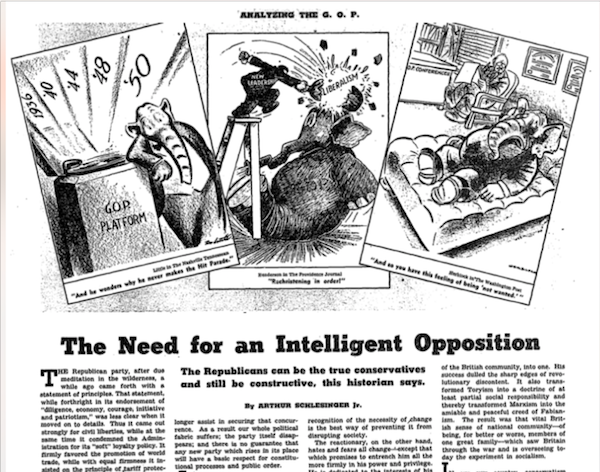 Stone Age Brain is the blog of Rick Shenkman, the founding editor of the History News Network. His newest book is Political Animals: How Our Stone-Age Brain Gets in the Way of Smart Politics (Basic Books, 2016). You can follow him on Twitter @rickshenkman.

The Republican Party, unsurprisingly, has taken the position that President Trump should be defended. This is unsurprising because this is what parties in power do.  If we want to explain what has happened to the Republican Party, which all must try to do in this hour of crisis when democracy itself is on the line owing to Republican perfidy, it is essential for us to view events not from the perspective of the rational actor but from that of the party politician.  Only then can the alarming events through which we are living become understandable.

We must begin with the basics.  Three overriding causes may be said to account for the behavior of politicians holding national office.  One, is money, with which we need not concern ourselves too much.  It’s obvious the role money plays in our politics.  Members of Congress must always be thinking in the back of their mind how any vote may affect their chance of financing their next election. Every GOP member of Congress has to worry that if they vote against Trump they’ll be cut-off from various campaign funds available to Republicans in good standing with the party and the party’s major-domo donors such as Sheldon Adelson and Charles Koch.

More interesting, though also obvious, is the second factor, pure partisanship. The social sciences tell us that partisanship is hard-wired in the human brain.  It is the reason we cheer for our side in a ball game and hope for the opposition’s defeat.  Once we identify with a group we look for evidence that confirms the group’s status and dismiss evidence that detracts from it.  Because partisanship is stronger among Republicans generally than it is among Democrats, perhaps owing to a default loyalty bias among people who identify as conservative, it is pretty easy to comprehend the ordinary Republican’s behavior in ordinary times.

Of course, these are not ordinary times.  Presidents are rarely impeached.  So Judiciary Committee Chairman Jerry Nadler, ahead of the committee’s vote on impeachment, issued a rare plea that his Republican colleagues consult their consciences before voting.  As many have noted Republicans during Watergate did just this, voting against Nixon when they similarly faced an impeachment vote.  Why is no Republican doing that this time?

The explanation may be found in the third factor accounting for the behavior of politicians. It is this one that is perhaps the most telling in the current situation.  Politicians prefer winning over losing and recent history suggests that the way to win, notwithstanding the losses the party suffered in 2018, is to stand with Donald Trump .  By nature politicians are cautious.  The only way to know what will succeed in winning votes is to follow the path of proven winners like Trump.  As long as he appears to be retaining the support of the GOP party base it is prudent to assume that he has figured out the magic sauce in the recipe of political victory and to follow the recipe closely.  Only a few dare to tamper with the ingredients.

Change is unlikely in the Republican Party short of a massive defeat.  Only in defeat do politicians, facing years in the wilderness, risk experimenting with new approaches.  Thus far there’s little sign that the party base is fielding second thoughts about Trump.  He remains nearly as popular today among Republicans as he did when he was elected.  Polls show his support among Republicans in states like California and Texas is north of 85 percent.  Nixon's support, by contrast, began to collapse by the time he faced impeachment.  At the beginning of 1973, before Watergate shook the country, Nixon had the support of 91 percent of GOP voters.  By the end of the year — a year in which John Dean testified about payoffs to the Watergate burglars and Special Prosecutor Archibald Cox was fired in the Saturday Night Massacre — Nixon’s support in the GOP had fallen to 54 percent.

So the real question isn’t why members of Congress are remaining staunch Trump supporters, but why the GOP base is.  Many reasons have been offered for this strange phenomenon (strange because Trump is so unlikely an avatar of Republican virtue). They include Fox News, Rush Limbaugh, and the other leading cogs in the propaganda machine that props up the Republican Party.

Whatever the cause of Trump's hold over the GOP base, it's a fact, and we as a country need to do something about it. We have to hope that the GOP evolves into a better version of itself because, as Arthur Schlesinger Jr. observed in an article in the New York Times in 1950, this country needs two intelligent parties. Right now we've got just one.  Only the Democrats are grappling with the real problems the United States faces, among them climate change and inequality.  This is untenable over the long term.

Through much of our history we have had a responsible conservative party, as Schlesinger noted in his piece in the Times.  In antebellum America the party of Jefferson was cross-checked by the party of Hamilton and Adams.  In the next generation Jacksonians faced off against Whigs, and while the Whigs eventually disappeared, for decades they offered Americans like Lincoln an intelligent alternative.  In the postbellum period the GOP espoused (for a time)  a bold vision of racial equality and entrepreneurial zeal.  Later it was captured by the plutocrats but by the turn of the 19th century reform elements led by Teddy Roosevelt succeeded in refashioning the party as an engine of reform.  In the 1920s the party once again became beholden to the rich until the Great Depression put an end to its control of the federal government.  For a couple of decades it nearly ceased to exist at the national level.  Then, as if in response to Schlesinger’s call, the party finally made peace with the New Deal under the leadership of Dwight Eisenhower.  “Should any political party attempt to abolish social security, unemployment insurance and eliminate labor laws and farm programs,” Ike wrote, “you would not hear of that party again in our political history.”

Under both Richard Nixon and Ronald Reagan the GOP continued to deal with real world problems, particularly in foreign affairs.  But slowly in the years following the end of the Cold War Republicans gave themselves over increasingly to fake nostrums.  They did this because they found they couldn’t win by running on their real agenda -- tax cuts for the wealthy, which constituted nearly the whole of their domestic program once welfare had been reformed in the 1990s.

Trump in 2016 correctly identified several key issues that demand public attention, especially the decline and demoralization of much of rural America.  But rather than offer a rational program to address this and other issues he won election by dividing the country along racial and religious lines.  Instead of appealing to the better angels of our nature he played his voters for fools.  He began his time in the national political spotlight by hinting that Barack Obama was born in a foreign country and might be a secret Muslim.  Later he signed up as a card carrying member of the anti-science brigade of climate change deniers.  Throughout his presidency he’s spread rumors of conspiracies. And his biggest "accomplishment"?  It was giving the wealthy huge tax breaks.

What if the GOP doesn’t reinvent itself as a responsible party? Schlesinger worried seven decades ago the GOP could collapse into pieces, leaving “its members prey for fascist-minded demagogues.”  There was, it turns out, another possibility Schlesinger didn’t anticipate.  It’s that the party would hold together by itself appealing to a trinity of fascist evils: xenophobia, racism, and authoritarianism. This should worry all of us.