That Other Dick Cheney Movie 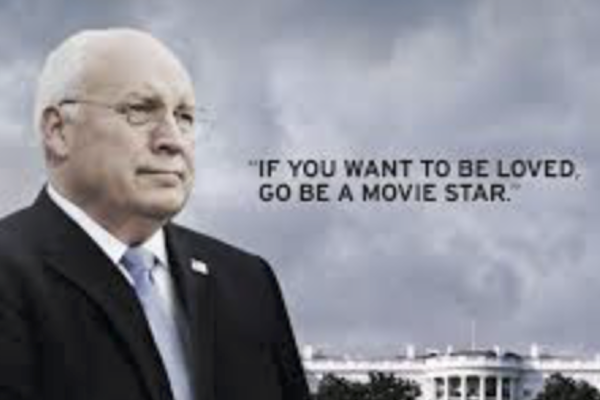 Last week, instead of watching “Vice,” my wife and I watched that other Dick Cheney movie, “The World According to Dick Cheney.” R. J. Cutler made this documentary in 2013.

It’s true that the actors in “Vice” look amazingly like Cheney, Lynne Cheney, and George W. Bush, but in Cutler’s film, they look even more like the originals!

Please pardon that moment of forced humor; my excuse is that the rest of this brief review won’t be funny. But since HNN never reviewed “The World According to Dick Cheney” when it came out, and since the documentary will draw new viewers now, spurred by “Vice,” I want to get my critique of it out into the world.

Although I didn’t actually time it, about half of the film’s running time seems to be the real Dick Cheney on screen. Of course, the title promises as much. One would hope, however, that with a character as controversial and important as Cheney, the interviewer would ask hardball questions. Instead, he mostly tosses batting-practice lobs.

The narrator or one of the authorities the film interviews does note that the reason Saddam Hussein pretended to have “weapons of mass destruction” was to intimidate his neighbors, notably Iran. But it never points out that, threatened by Bush/Cheney, he had reversed himself and allowed United Nations inspectors full access to his country, so they might investigate Cheney’s claim of WMD. After seeing the movie, people would never guess that the inspectors had to get out of the country to avoid being killed during Bush/Cheney’s “shock and awe” demonstration that kicked off the war.

The film never bothers to show a graph or give other accounting of the number of dead and wounded Iraqis we caused, with our war and the later civil war we triggered, which is still going on in a way. Nor does it tell how many Americans died or how much we spent. One of Cheney’s most absurd prewar assertions was his claim that the war would pay for itself, from oil revenues we would somehow get. None of this gets into the movie.

To its credit, the movie does contest Cheney’s claims that our torture of POWs was not torture and was legal. It makes some other important points as well. But it never explicates clearly what went wrong in Iraq and why. Two key decisions by Bush/Cheney caused the U.S. occupation to become a quagmire: their dismissal of the Iraqi army and their dismissal of the police.

During World War II, when Germany occupied, say, Holland, they did so through the Dutch state. When we occupied Japan, we did so through the Japanese state, even including the emperor. That’s how it’s done. Only … not in Iraq. Somehow Cutler never mentions these preposterous decisions to Cheney, never asks him to defend them.

Before Bush/Cheney upended Iraq, Hussein was in a box. He had few allies; Iran, Kuwait, Saudi Arabia, and Israel were his enemies. He could not use his air force, not even against his own people, as was his wont, and was facing internal opposition from Shiites and Kurds. We had him where we wanted him. Hussein never supported al Qaeda and never sponsored terrorist attacks in the U.S. or Europe.

By 2013, when the movie was made, where were we? Bush/Cheney’s war had sparked the creation of ISIS in western Iraq, which also spread to Syria (and later to the Philippines and other countries). ISIS had linked with al Qaeda. Meanwhile, the Iraqi government that we created in Baghdad to replace Saddam Hussein is Shiite, like Iran, increasing Iran’s influence in the region. Cheney’s primary defense of all his policies is that they made America safer, but Cutler never asks him how these developments could possibly have done so.