What the Prostate Gland Can Teach Us About War-Fighting

This is David P. Barash's blog.  He is an evolutionary biologist and professor of psychology at the University of Washington; he is writing a book about the process whereby people are forced to accept that they aren’t central to the cosmos. 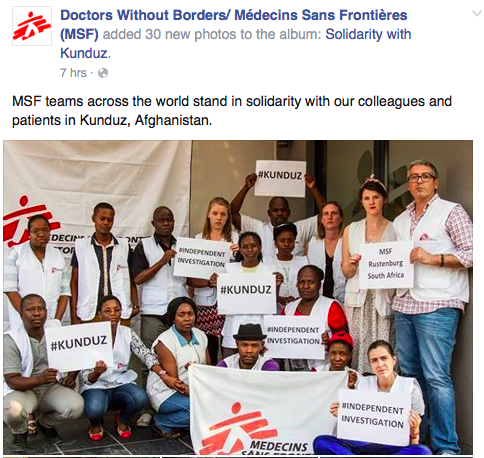 In 1829, Francis Henry Egerton, the 8th Earl of Bridgewater, bequeathed 8,000 pounds sterling to the Royal Society of London to support the publication of works "On the Power, Wisdom, and Goodness of God, as Manifested in the Creation."  The resulting Bridgewater Treatises, published between 1833 and 1840, are classic statements of "natural theology," seeking to demonstrate God's existence by examining the natural world's "perfection."

Do I really think there is a lesson here for the just-reported tragic bombing of a Doctors Without Borders hospital in Afghanistan? Stick with me and I’ll try to explain. The presumption of natural perfection is a mainstay not only of believers in special creation, but even, to some degree, of evolutionary biologists, who generally know better, but whose enthusiasm for the power of natural selection to generate outcomes of unparalleled complexity tends to obscure the many equally revealing examples of evolution resulting in pronounced error and imperfection.

It is widely assumed that human beings – along with other living things – are exceptionally well constructed: for religious fundamentalists, this is evidence for divine intervention, whereas for the biologically informed, it indicates the subtle reality of natural selection, paradoxically because of the frequent imperfections in the natural world.

Fast-forward from the Bridgewater Treatises to 21st century war-fighting and “ant-terrorist” airstrikes in particular. I have no doubt that the recent lethal airstrike in Kudzu was an error. Certainly it wasn’t an example of the perfection of today’s “smart munitions,” despite the extent to which apologists for high-tech missiles and bombs emphasize how “nearly perfect” and “highly accurate” they are.

As Jeb Bush understated with regard to the school shootings in Roseburg, Oregon, “stuff happens,” and often this stuff is bad. And stuff – often very unpleasant stuff – also characterizes the products of evolution by natural selection.

Natural selection proceeds by tinkering with existing structures, producing outcomes that are often ramshackle and just barely functional, so that, counter-intuitively, some of the strongest evidence for evolution as a natural, material process are the facts of poor “design,” resulting from historical constraints. For example, no intelligent designer (not even a first year engineering student) would come up with the human lower back, the knee, the prostate, the location of the female birth canal, the exit of the optic nerve through the retina (which produces a small but nonetheless suboptimal blind spot). When we understand that living things are highly contingent and imperfect products of natural selection, mired in history and thus unable to generate perfect optimality, we see ourselves more clearly, although the transition has been a painful one, not easily accepted.

Now we have Secretary Clinton joining with former Florida governor Jeb Bush and Ohio governor John Kasich, calling for a no-fly zone in Syria. We can be almost certain that such a process, if implemented, would be liable to highly contingent, unpredictable and imperfect results. Critics might note that a fully material process such as natural selection is biological (and statistical) at its core, whereas a military strategy is the consequence of cultural rather than biological evolution. But susceptibility to imperfection and error remain in both cases.

Natural selection is mathematically precise, whose outcome should be - and for the most part, is - a remarkable array of "optimal" structures and systems.  A naive view therefore assumes that the biological world is essentially perfect and certainly highly predictable, like a carefully orchestrated geometric proof.  Or like a billiard game, in which a skilled player can be expected to employ the correct angles, inertia, force and momentum.  And in fact, living things – like today’s military hardware - reveal some pretty fancy shooting.

And so it was that even David Hume - materialist and atheist - marveled at how the parts of living things "are adjusted to each other with an accuracy which ravishes into admiration all men who have ever contemplated them."  But admiration is not always warranted.  Gilbert and Sullivan's "Mikado" sings about "letting the punishment fit the crime," gleefully announcing, for example, that the billiard sharp will be condemned to play "on a cloth untrue, with a twisted cue, and elliptical billiard balls." To a degree not generally appreciated, the organic world contains all sorts of imperfections, and as a result, shots often go awry ... not because the laws of physics and geometry aren't valid, or because the player isn't skillful, but because even Minnesota Fats was subject to the sting of reality.

Make no mistake, evolution - and thus, nature - really is wonderful.  The smooth-running complexity of physiological systems, anatomical structures, ecological interactions, and behavioral adjustments are powerful testimony to the effectiveness of natural selection in generating highly nonrandom systems such as the near-incredible complexity of the human brain, the remarkable lock-and-key fit between organism and environment, the myriad details of how a cell reproduces itself, extracts energy from complex molecules, and so forth.

It must be emphasized that the preceding does NOT constitute an argument against evolution; in fact, quite the opposite! Thus, if living things (including human beings) were the products of special creation rather than of natural selection, then the flawed nature of biological systems, including ourselves, would pose some awkward questions, to say the least.  If God created "man" in his image, does this imply that He, too, has comparably ill-constructed knee joints, a poorly engineered lower back, dangerously narrow birth canal, and ridiculously ill-conceived urogenital plumbing?  A novice engineer could have done better.  The point is that these and other structural flaws aren't "anti-evolutionary" arguments at all, but rather cogent statements of the contingent, unplanned, entirely natural nature of natural selection. Evolution has had to make do with an array of constraints, including - but not limited to - those of past history.

We are profoundly imperfect, deep in our nature. And we’re not doing all that great in Afghanistan, Iraq, Libya or Syria, either. Decades ago, we were told that the Strategic Air Command could “lob a nuclear warhead into the men’s room at the Kremlin.” And from Kosovo, Iraq, Afghanistan and Syria, we’ve been treated to video footage showing what happens when various highly accurate conventional munitions do what they are supposed to do. What we don’t see, however, are the cases where they misfire, when supposedly perfect aiming is compromised either by human, mechanical or electronic error, and we end up blowing up an Afghan wedding party or a hospital.

Like evolved organisms, we are also severely constrained by past history, unable to generate “optimal” tactics and strategies, independent of the political, social and economic circumstances that brought us to the present state of things. And equally likely to screw up as a result.

By the end of the 19th century, Thomas Huxley was perhaps the most famous living biologist, renowned in the English-speaking world as "Darwin's bulldog" for his fierce and determined defense of natural selection.  But he defended evolution as a scientific explanation, NOT as a moral touchstone.  In 1893, Huxley made this especially clear in a lecture titled "Evolution and Ethics," delivered to a packed house at Oxford University.  "The practice of that which is ethically best," he stated, "what we call goodness or virtue - involves a course of conduct which, in all respects, is opposed to that which leads to success in the cosmic struggle for existence. In place of ruthless self-assertion it demands self-restraint; in place of thrusting aside, or treading down, all competitors, it requires that the individual shall not merely respect, but shall help his fellows; its influence is directed, not so much to the survival of the fittest, as to the fitting of as many as possible to survive."

"The ethical progress of society depends," according to Huxley, "not on imitating the cosmic process, [that is, evolution by natural selection] still less in running away from it, but in combating it." It also depends on recognizing that even our highest tech, like the most elaborately evolved organisms, is not only vulnerable to imperfection, but guaranteed to manifest it.