Why We Should All Regret Jefferson's Broken Promise to Kościuszko


by Gary B. Nash and Graham Russell Gao Hodges

Nash and Hodges are the co-authors of Friends of Liberty: A Tale of Three Patriots, Two Revolutions, and the Betrayal that Divided a Nation: Thomas Jefferson, Thaddeus Kosciuszko, and Agrippa Hull (Basic Books, April 2008). 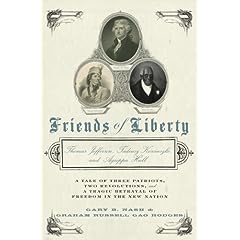 In March 1798, Tadeuz Kościuszko, a hero of the American and Polish revolutions, and Thomas Jefferson, Vice President of the United States, huddled in a cramped second-story room in Philadelphia to make a pact of honor centered on the Pole’s sizable American estate. Kościuszko, who had returned to the United States to a hero’s welcome less than a year before, anxiously wanted to leave for Paris to avoid entrapment by the Alien and Sedition acts. (Jefferson, estranged from President John Adams and hoping to use Kosciuszko’s prestige on a secret mission to convince the French not to wage war with the United States, prepared a fake passport for Kosciusko.) Before the Pole departed, he and Jefferson constructed a will to dispose of $15,000 (Kosciuszko’s Revolutionary pay) after his death. The two men labored together to produce a document with the potential to alter American history.

Kościuszko’s first version deserves quotation. Though the spelling and syntax are eye-straining, the crude yet eloquent prose convey how passionately the romantic Polish revolutionary had embraced abolitionism.

I beg Mr. Jefferson that in the case I should die without will or testament he should bye out of my money So many Negroes and free them, that the restante [remaining] sums should be Sufficient to give them aducation and provide for thier maintenance, that . . . each should know before, the duty of a Cytyzen in the free Government, that he must defend his country against foreign as well as internal Enemies who would wish to change the Constitution for the worst to inslave them by degree afterwards, to have good and human heart Sensible for the Sufferings of others, each must be married and have 100 Ackres of land, wyth instruments, Cattle for tillage and know how to manage and Gouvern it well as well to know [how to] behave to neyboughs [neighbors], always wyth Kindnes and ready to help them . . . . T. Kościuszko.

In this unconventional but emotion-packed will, Kościuszko expressed the convictions and commitments that made him such an admirable man for black Americans. Drawing on his long-standing belief that the downtrodden could prosper--peasants, as well as slaves--if given their freedom under favorable conditions, he tried to promote universal liberty and give Jefferson the opportunity to lead Southerners in a quest to remove the stain of slavery from the new nation.

A second revised will, entirely in Kościuszko’s hand like the first, included a change of immense significance. Rather than the vague reference in the original version to use Kościuszko’s legacy to free “so many Negroes,” the rewritten will specified that “I do hereby declare and direct that should I make no other testamentary disposition of my property in the United States I hereby authorize my friend Thomas Jefferson to employ the whole thereof in purchasing Negroes from among his own or any others.” Kościuszko surely made this crucial change with Jefferson’s consent, for Jefferson agreed to be the executor, as well as the beneficiary, of the will. Was Jefferson thinking of Sally Hemings, her daughter Harriet who was now not quite three, and the newborn Beverley, born just ten days before Jefferson witnessed Kościuszko’s signing of the will?

Jefferson endorsed Kościuszko’s scheme with a full heart, regarding the Pole as “the truest son of liberty I have even known.” For Jefferson, a promise at any time was a serious matter; but given freely under these conditions, it was to be held sacred. And for the next twenty years, Jefferson did not waver in his commitment to his Polish friend, maintaining a warm correspondence with Kosciuszko and, as they grew old together on opposite sides of the Atlantic, even invited him to live out his last years at Monticello and bury his bones alongside those of the Sage of Monticello.

Kosciuszko died on October 15, 1817. After several years of vacillation, Jefferson withdrew from his pact of honor with Kosciuszko by pleading in a Virginia court in Charlottesville that he could not serve as executor of his friend’s estate and would not use the money to free his slaves. As William Lloyd Garrison would say many years later, “What an all-conquering influence must have attended his illustrious example,” if he had taken the lead to abolish slavery. Merrill Peterson, for all his admiration for Jefferson, was anguished by this retreat: “The object of [Kosciuszko’s] will was lost. Had Jefferson felt stronger about the object, he would have ventured the experiment, despite statutory obstacles and the shortness of years, for the experiment [of freeing his slaves] was one he often commended to others and, indeed, one he may have himself suggested to Kosciuszko.”

Why did Jefferson, while throwing himself energetically into the creation of the University of Virginia, plead that he was too old and tired to carry out Kosciuszko’s will and betray the trust of his Polish compatriot? One of the key reasons was Jefferson’s allegiance to the Old Dominion aristocracy and his devotion to sustaining the economic and cultural leverage of the white South in national politics. He also feared offending friends, especially slaveowners already shaken by the actions of others in Virginia who had released slaves from bondage. In a time when we are accustomed to seeing the current president reject scientific analysis on fearsome problems, stack regulatory commissions with those devoted to non-regulation, and stake out policy positions on the basis of insider friends and their deep-pocket interests, this earlier abandonment of an honor-bound pact with Kosciuszko has a peculiar odor.

As Kosciuszko’s will, abandoned by Jefferson, made its way through the courts, many complications arose. The estate was finally awarded by the Supreme Court in 1852, 26 years after most of Jefferson’s slaves had been auctioned on the rolling lawn at Monticello to extinguish his debts, to Kosciuszko’s descendants. For years in Poland, Kosciuszko’s countrymen held the view that the American Civil War could have been averted if the Polish hero’s philanthropic, abolitionist plan had been implemented. When the slaves at Monticello mounted the auction block to be sold off after the Founding Father died—the slaves that could have been freed if Kosciuszko’s will had been honored—a small-town editor in a Susquehanna River town asked how Jefferson, “surely the champion of civil liberty to the American people,” left “so many human beings in fetters to be indiscriminately sold to the highest bidder." In biting words, the editor wrote: “Heaven inspired Jefferson with the knowledge ‘that all men are created equal.’ He was not forgetful—in his last moments he ‘commended his soul to God, and his daughter to his country;’ but to whom did he commend his wretched slaves?"

From the book to Friends of Liberty by Graham Russell Gao Hodges and Gary Nash. Reprinted by arrangement with Basic Books (www.basicbooks.com), a member of the Perseus Books Group. Copyright © 2008.