Was the Marshall Plan as Good an Example of Bipartisanship as People Say?

Mr. Behrman is the author of The Most Noble Adventure: The Marshall Plan and the Time When America Helped Save Europe. He is the Henry Kissinger Fellow for Foreign Policy at The Aspen Institute.

On June 5, 1947, Secretary of State George Catlett Marshall arrived at Harvard University’s 286th Commencement with a bold idea.  World War II had decimated Europe.  Beyond the physical destruction and death, the continent’s economies were in an acute state of commercial and financial dislocation.  National Communist Parties – in France and Italy, in particular – were finding fuel in the want and despair.  To the east, the Soviet Union emerged a continental superpower with expansionist designs. 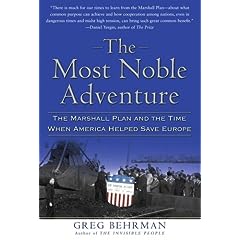 Marshall had come that day to put forward a solution to these immense strategic challenges.  America would stand with Europe and offer a hand in partnership, an invitation to embark on a new program for European recovery.  Almost immediately it became known as the Marshall Plan.  More than a foreign aid program or a humanitarian enterprise, the Marshall Plan was the centerpiece in America’s postwar grand strategy of containing the Soviet Union and the spread of Communism.

Marshall’s early June speech launched the Marshall Plan.  But, in order to go forward, the program would need congressional approval and funding.  While historians have given extensive treatment to the geopolitical and economic dimensions of the Marshall Plan, little attention has been paid to the domestic political dimension, the remarkable ten month period – from Marshall’s speech on June 5, 1947 to the passage of the European Recovery Act on April 3, 1948 – when the Plan’s supporters needed to win its approval in the United States Congress. (My book covers this in detail.)

The indispensable element was a remarkable bi-partisan partnership forged between Secretary of State George Marshall and the leading Republican figure in Congress, the Chairman of the Senate Foreign Relations Committee Arthur Vandenberg from Michigan.  Were it not for this partnership, the Marshall Plan would not have come to pass.  Forged amidst intense political currents and personal pressures, it stands as one of the greatest and most productive bi-partisan partnerships in American history and a testament to what may be achieved when men of common vision place the national interest above political and personal agendas.

Throughout this ten month period, there were very strong political and contextual currents working against the Plan’s passage in Congress.  America had sacrificed a great deal – in blood and treasure – in World War II.  A war-weary American public wanted a peace dividend, and was chary of new foreign entanglements or commitments.  At the Embassy in Moscow, U.S. Ambassador to the Soviet Union W. Averell Harriman said that all Americans wanted to do was to “go to the movies and drink Coke.”

In addition, the memory of the Great Depression and the post-World War I recession were still fresh and raw.  Americans were afraid that post-war economic conversion could yield great pressures on the economy.  Furthermore, with Lend-Lease, the United Nations Relief and Rehabilitation Administration (UNRRA) as well as large loan packages to Britain and France, in particular, Americans felt like they had already provided a great deal of aid to their wartime allies.  There was a prevailing fatigue with foreign aid.  Undersecretary of State Dean Acheson commented on what he believed was the “popular attitude” in America towards foreign policy:  “Don’t be a Santa Claus.”

The political playing field would not make it any easier.  In 1946, the Republicans swept the mid-term elections, obtaining majorities in both houses of Congress.  Cost-cutting to reward a war-weary people was the order of the day.  The Republicans had been the minority party since 1933 and they were determined to reclaim the White House in the November 1948 election.  It added a layer of intensity to the politics of the time.

All of this meant that securing political support for a large, unprecedented program of foreign assistance, a sweeping new foreign commitment, would be a very tall order.  To that end, George Marshall set his sights on the indispensable figure in Congress.  Vandenberg, or Van, as he was known, was a former isolationist, and a stringent one at that.  He was one of FDR’s main opponents in keeping America out of World War II, prior to Pearl Harbor.  He was also a fiscal conservative, wary of foreign aid schemes, or “vast Rooseveltian giveaways,” as some of his Republican colleagues called them.  America’s reach and interests meant that it would have to be an engaged world leader.

Marshall seized on Van’s volte-face and began cultivating the senator immediately.  Vandenberg had great stature on foreign policy amongst Republicans in Congress.  While there were staunch isolationists and a good number of nay-sayers and fence-sitters, Van would carry a good portion of his party.  Marshall brought him into deliberations at the outset, consulting him regularly on the most private details of the plan.  He solicited his views, at first to play to Van’s sense of self-importance, and to make him feel like an insider.  But, Marshall also respected Van’s political acuity and decency.  It was a gamble for Marshall.  It would take the secretary’s time and energy – which were of tremendous value – and the consultations and cooperation also meant Van would have a chance to dilute or obfuscate the State Department’s intentions for the fledgling Plan.  And there was no guarantee that Van would stay the course.  If he pulled out of the partnership, it would spell political disaster.

Over time, Vandenberg proved himself a loyal partner – and a constructive partner.  More than a political asset, Vandenberg put forward extremely valuable suggestions.  Some were important politically.  Following Marshall’s speech, Van proposed a bi-partisan, or non-partisan, 16-person committee comprised of leading figures from American life.  They would deliberate over the viability of a long-term aid program and the ability of the U.S. economy to withstand it.  Truman loved the idea and gave Van credit.  Shrewdly and manipulatively, they worked together to stack the committee with people they felt likely to come out in favor of the plan.  After months of deliberations and analysis, the committee came out in favor, without one dissent.  It was a public relations and political boon.

In addition, Vandenberg insisted that the Marshall Plan had to break with the piecemeal, ad-hoc foreign aid programs of the past.  It had to be administered like a business enterprise, with a clear, discernible strategy and goals.  And it had to be run by businessmen, the best, the most outstanding and capable men in American life.  Van proposed Paul Hoffman, president of the Studebaker Corporation, a Republican to run the program, the centerpiece in a Democratic administration’s foreign policy.  At Marshall’s recommendation, Truman accepted the idea.  Hoffman’s appointment, and the idea that the plan had to be run like a business, and by pragmatic, capable, proven, results-oriented men, was one of the keys to the plan’s success.

Marshall and Vandenberg met several times a week, for several hours, and they were in touch almost daily.  Their meetings were private and secretive, a potential political liability for both men.  As they met and forged a bi-partisan path ahead, many Republicans railed against the program and the administration that was backing it.  The criticism was profuse and often vituperative.  Journalists began criticizing Marshall for not brining in Republicans.  Marshall bristled at one critical journalist:  “He was profound in his knowledge and he didn’t know a damn thing.  Vandenberg and I were just handling this business.” Marshall added that the tandem couldn’t have gotten much closer, in fact, “unless I sat on Van’s lap or he sat on mine.”

Van paid a price for his close working relationship with Marshall, and his support of the program.  In order to muster as much credibility and political currency as he could for the congressional fight during the winter and spring of 1948, Vandenberg announced he would not seek the presidency, ceding his life-time presidential ambitions for the plan.  When Marshall had trouble, Van reminded him to put his worries in perspective:  “You need to belittle this,” he told Marshall.  Remember, “I have to sit up and be called a Benedict Arnold.”

Through Marshall’s national prestige and Vandenberg’s standing among Republicans in the Congress – as well as extraordinary work by officials at State in preparing sound legislation and great effort by the plan’s supporters, who barnstormed the country to drum up popular support – the European Recovery Act passed both houses of Congress on April 3, 1948.  The first ships bearing Marshall aid left Galveston, Texas for Europe days later, beginning what was perhaps the most effective peace-time American foreign policy program in U.S. history.

It would not have been possible were it not for George Marshall, Arthur Vandenberg and the remarkable bi-partisan collaboration they forged together.