Why Roosevelt Was Right About Stalin

Mr. Roberts is a Professor in the Department of History at the University College Cork, Ireland.

Roosevelt was right about Stalin. The Soviet dictator was a man you could do business with. That is one of the main findings of my new book, Stalin’s Wars: From World War to Cold War, 1939-1953 (Yale University Press 2007).  “Had I been born and brought up in America,” Stalin told the head of the American Chamber of Commerce in June 1944, I would probably have been a businessman.” Even as the Cold War broke out Stalin tried to persuade the Republican politician Harold Stassen of the merits of Soviet-American collaboration. “I am not a propagandist, I am a man of business,” Stalin told his visitor in April 1947, pointing out that he and Roosevelt had never indulged in the name-calling game of “totalitarians” v. “monopoly capitalists.” 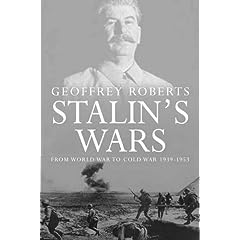 Among the many myths of the Cold War none has been more persistent than the idea that it was Roosevelt’s appeasement of Stalin during World War II that encouraged Soviet aggression and expansionism, resulting in the loss of Eastern Europe to communist control. This criticism was most often voiced at the height of tensions in the late 1940s and early 1950s but resurfaced later on every occasion the periodic détentes in East-West relations faltered and international anxieties increased. In the post-Cold War years conservative commentators renewed the attack on how Roosevelt conducted relations with Stalin, using the story as a cautionary tale about the dangers of appeasing dictators. One of the most oft-cited historical justifications for the war in Iraq has been that the experience of appeasing Stalin in the 1940s -- and Hitler in the 1930s -- demonstrates that the sooner dictators like Saddam Hussein are stopped the better.

But the analogy between Stalin and Saddam is not historically accurate, not least because, unlike Sadam, the Soviet dictator wanted to be bargained with and was prepared to pay the price of respecting US interests and cooperating for the sake of common security and world peace.

Roosevelt’s detractors have not had it all their own way. FDR’s many supporters have pointed out that the President’s collaboration with Stalin signaled US recognition that an allied victory in the anti-fascist war depended on the Soviets defeating Nazi Germany on the Eastern Front. That is why Roosevelt insisted on a policy of unconditional support for the Soviet war effort and sent as much American aid to the USSR as he could. Cold War warriors subsequently fantasized that a hard-line, confrontational policy might have deterred Soviet westward expansion at the end of the war, but the territories occupied and controlled by the Red Army reflected the military and political power realities on the ground. The Grand Alliance between Britain, the Soviet Union and the United States did not survive for long after the war but, say FDR’s defenders, a continuation of Roosevelt’s conciliatory and cooperative approach may have modified Stalin’s behavior rather than driving him to adopt even more extreme positions.

Unlike previous assessments of Roosevelt’s Soviet policy my book approaches the subject from Stalin’s point of view and does so with the benefit of thousands of new documents released from Russian archives since the end of the Cold War. What this new evidence shows is that Stalin was completely sincere in his commitment to both a wartime coalition and a peacetime Grand Alliance with Britain and the United States. He saw this alliance as a safeguard against a revival of the German and Japanese threats. He hoped that the postwar reconstruction of the Soviet economy would be boosted by a continuation of US aid. He calculated that American anti-communism would continue to be countered by a Rooseveltian centre-left alliance that recognised the mutual benefits of peacetime collaboration with the USSR.

Stalin’s support for a peacetime Grand Alliance was, like Roosevelt’s support for the Soviet war effort, self-interested. Stalin had no intention of sacrificing vital Soviet interests and his price for long-term collaboration with the capitalist world would be a high one. In relation to the United Nations, for example, Stalin was an enthusiastic supporter of Roosevelt’s idea that the UN could provide a framework from within which the Great Powers would police a new world order. But Stalin insisted that all the Great Powers should have the right to veto UN action on peace and security matters and thereby be able to protect their own interests. Above all, Stalin demanded that American democratic ideals and values should be modified to accommodate the USSR’s sphere of influence in Eastern Europe – a buffer zone that he saw as essential to Soviet postwar security. Stalin hoped that communist control in the region could be secured by consent but he had no compunction about the use of coercion when and where it was necessary, and he expected his western allies to accept this.

Stalin had the greatest personal respect for Roosevelt – and for the superpower that he represented. When FDR died suddenly in April 1945 Stalin was genuinely shocked and he mourned the loss of a great statesman. When Averell Harriman, the American ambassador, broke the news Stalin said “President Roosevelt has died but his cause must live on. We shall support President Truman with all our forces and all our will.” In fact, Soviet-American relations hit a rocky patch immediately after Roosevelt died but by the time Stalin met Truman and Churchill at Potsdam in summer 1945,  trust and optimism had been restored and the Soviets hailed the conference as a great success and looked forward to a glowing future of tripartite cooperation.

But the Grand Alliance began to go awry after Potsdam, and the reason why exposes the flaw in Roosevelt’s limited understanding of Stalin as a fellow practitioner of realpolitik: the Soviet dictator was a convinced communist as well as a pragmatic politician. Wearing his Bolshevik hat, Stalin saw a radical revolution developing in Europe after the war, a political situation that would facilitate the advance of his communist allies. Stalin envisaged a people’s democratic Europe governed by left-wing regimes with a strong communist influence. This new Europe would offer geo-ideological as well as geopolitical protection for Soviet security and would constitute the first stage in a long-term, continental transition to socialism and communism.

The ideologically blinkered Stalin did not see the contradiction between his communist aspirations and a continuation of the Grand Alliance. A people’s democratic Europe was not an immediate threat to western capitalism, thought Stalin, and he was prepared to defer to British and American interests in their spheres of influence. Stalin complained about postwar Anglo-American globalism but he was prepared to live with it, provided there was a quid pro quo. But that was not how Roosevelt’s successors saw the situation. To Truman and others Stalin’s geo-ideological ambitions were dangerous and threatening. Western resistance to Soviet policies and demands grew in the early postwar years and this made Stalin think that the British and Americans were intent on rolling back the USSR’s wartime territorial and political gains. It was a spiral of mutual suspicion and misapprehension that led rapidly and inexorably to the Cold War.

The world did survive the Cold War, but only just. The conflict had many negative and lasting consequences, not least the sorry state of affairs in the Middle East. Had he lived longer could Roosevelt have avoided the Cold war and salvaged the Grand Alliance? Would he have been able to persuade Stalin to moderate his ideological ambitions? Could the communist challenge have been met without resort to the Cold War?  Would Roosevelt have been able to fulfill his wartime dream of a postwar order that would guarantee peace and security for all? We cannot know. What we do know for sure is that Stalin was sincere in his commitment to collaborate with Roosevelt during the war and was sorely disappointed when that cooperation did not continue under Truman.

One of the sorriest aspects of Roosevelt's tenure was the way lend-lease aid kept flowing into the Soviet Union long after Hitler's forces were defeated. Liberals floated a notion that Stalin would help against Japan, but nobody actually believed it. We gave him far too many locomotives, trucks, planes and other materiel, and kept pouring it on well after Hitler was through. The Roosevelt and Truman administrations were riddled with communist sympathizers, of course, (and worse). Fortunately, more of this is being revealed all the time, and now is well-lodged in the public mind, thanks to tireless work by Stalin's victims from Russia and elsewhere. We should be thankful that dwindling legions of FDR lovers will never be able to put that genie back in the bottle... Stalin was not "willing to do business" with the U.S. at all in the postwar period. We offered Marshall Plan aid to communist countries and he turned it down. Stalin was interested in protecting his empire by the avoidance of war with us, yes, but his first principle was to maintain absolute power in a closed society.

In response to the question 'does Professor Roberts read Russian?', as far as I can tell he has probably read more of the available documentation now available in Russia than most European or American scholars. I have read some of his previous work and been enormously impressed by his industrious mining of Russian archives. I have not yet read his latest book (nor, I suspect, have those who have offered comment so far), but I look forward to doing so with great pleasure - even if, in the end, I find that I do not agree with all that he writes.

I can barely believe how we misunderstood good ole uncle Joe--I guess soon another book will show that the Holodomor never happened, his alleged occupation of Eastern Europe a lie spread by Kennan et alii (Poles positively LUVED the man, Latvians felt genuinely liberated, honest, and Hungarians begged him tearfully to come and stay)....Funny how when David Irving tries to whitewash another reasonable (in his view at least) man with a mustache from that era, he gets nothing but trouble.

Well, you’ve sold me. A family member wanted to know what to give me for my birthday and I’m telling her “Stalin’s War.”

One very small quibble re the line “an allied victory in the anti-fascist war depended on the Soviets defeating Nazi Germany on the Eastern Front” would be that both Roosevelt and Stalin forces needed each other to be fully engaged for the Nazis to be utterly crushed. If either pulled back in their efforts before 1945, the remaining combatant would have likely faced a much longer war and -- horrors! -- yet another Versailles-like armistice.

If it turns out that the family member in question has already picked up a gift for me, I’ll plunk down the money for “Stalin’s War” myself.