Mr. Feifer is the author of Breaking Open Japan: Commodore Perry, Lord Abe and American Imperialism in 1853, published in November.

Who cares that Japan’s opening a century and a half ago was coerced? More of us should. The endeavor - always celebrated here as a brilliant stroke, as Commodore Matthew Perry has always been hailed (currently by the relative handful who know more than his name) as an eminent statesman for masterminding and leading the supposedly benevolent mission - was a tragedy for both countries. Its lasting damage to Japanese-American relations is bad enough, but we may now be fashioning more tribulation of a similar kind in other parts of the world. Our military might and indifference to the feelings of those who are subject to its power may be setting us up for more fruits of revenge.

The might in 1853 rested in the Commodore’s East Asia Squadron - two of the four warships powered by steam and all unimaginably more menacing than Japan had seen. In July of that year, they anchored a few hours south of the essentially undefended capital, then called Edo. Determined to get his way, delighted when his massive guns prompted fear, Perry had come to make Japan accessible to American ships after her two and a half centuries of isolation. 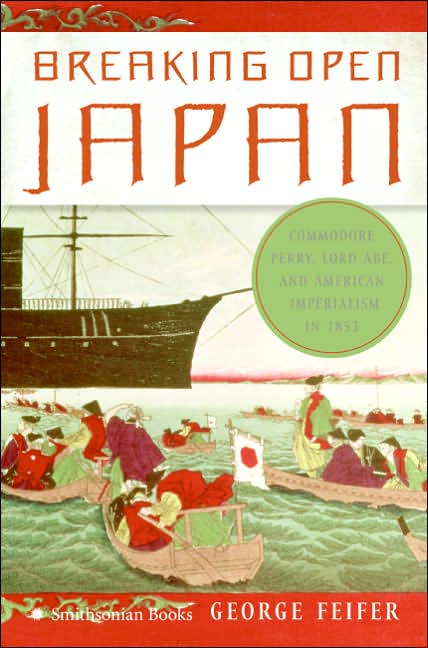 Why did the splendid naval officer but bad choice as an emissary want that so badly? Partly to awaken the long-isolated Japanese to their "Christian obligation to join the family of Christendom." More than that, "savage" Japan, as the Commodore liked to call the country whose civilization surpassed his own in many ways, seemed evil to Americans. In Edo’s zeal to protect native values from threatening foreign influences, especially Christian proselytizing, it reinforced the closing with prohibitions, including against visits by westerners. It sought to exclude even shipwrecked sailors, and some crewmen of New England whalers that had run aground were mistreated, although not nearly as badly as incensed American newspapers represented.

Actually, Edo had stopped the baleful practice, as Perry well knew, even while further frightening Japanese negotiators by lecturing them about it, as if he refused to know because it would undermine his cause. The shipwrecked-sailors issue was the weapons-of-mass-destruction boondoggle of its day: although protecting them topped the government’s list of the mission’s objectives, no doubt because it had the greatest public appeal, it was largely camouflage.

The Commodore’s ignorance of Japan’s conditions, intentions, wishes and policies - not entirely his fault since her rulers did everything they could to mask and mis-represent them - makes another uncomfortable parallel to the 21st-century resurgence of American exceptionalism. Despite some commendable attempts at study, Perry knew precious little about the life and thoughts of the country he affected almost beyond description. Far from weakening his resolve to benefit humankind by spreading American sway, his lack of knowledge probably strengthened it. His pronouncements about America's need for bases, bases, bases abroad and her duty to beat potential enemies to the punch might have served as material for Dick Cheney’s. About Japan in particular, he was "serenely convinced," a scholar recently summarized, that he was "bringing civilization to a benighted land that lived in flagrant violation of all norms of international society." Even more than most Americans of the time, he believed we had a kind of divine right not only to teach others how to live but also to take a share of their resources.

That takes us to coal, the industrial revolution’s oil. The 19th century’s "dearest mineral," as the Russians called it, powered the revolutionary steam engines that were transforming much of European and American life. Marine versions of that new machinery had begun replacing the sails of the clipper ships in whose holds China trade goods were delivered to and from Shanghai and eager America. The west coast ports shortened the voyages by some 2,500 miles, a great boon because speed was vital in besting rivals, especially brawny seafaring Britain, for that hugely profitable trade. The springboard western ports had come with Mexico’s surrender of California after the war of 1846-48, whose American naval hero was...Matthew Perry. Those are other factors that make Perry’s opening of Japan, just six years after the Washington-provoked Mexican War, relevant to our contemporary foreign ventures.

Coal was Perry’s prime objective because Japan lay on the fastest (Great Circle) route from California to Shanghai, and the newfangled steamships burned huge quantities of the precious stuff. Thus the mission that was cloaked in humanitarian purpose - echoes of which sound at every contemporary presidential press conference - was essentially for furthering commercial interests dear to the Commodore. To dot the "i," he wanted Japanese coal for what, according to some Americans, God had placed it there: fueling our vessels engaged in the lucrative China trade.

As for the cowed, vanquished, humbled Japanese, no schoolchild hasn’t been taught about Perry’s Black Ships, as they were instantly labeled and would forever remain known, with the color’s usual implication. (Although a tiny number of their ancestors in 1853-54 wanted more contact with the West, the vast majority hated the idea.) Until they appeared, Japan considered America a lesser threat to its security than several European nations. Now it saw the greatest danger in the American fleet, and the overriding purpose of the deeply insular country that had had no national navy - nor army - became ensuring"never again!" by building military might, especially big ships with big guns. After Edo’s surrender, which took the form of shamefully lop-sided treaties of supposed friendship, a triumphant missionary who’d served as Perry’s (very shaky) translator exulted, "Truly, we may say that God has gone before and prepared our way among this people. And I hope it is to be for their lasting benefit too." Rather than benefit, however, the Japanese people - together with most others in and around the Pacific, including Americans - paid a terrible price for the Perry mission. Their "hundred-year war" to militarize was a natural, even predictable, response.

The history of the Pacific, a name that should have rung with irony or been changed to Bellicose during that near century of preparing for war and making it after 1853, would have been very different if Japan had been left to open on her own, in keeping with her wants and wishes - which she was doing, but unknown to Perry and other Americans. The wallop to her self-esteem by the unabashed imperialist’s naked bullying led more or less directly to more pain in Pearl Harbor. During the 88 years between those events, the Japanese never forgot their humiliation by the mighty East Asia Squadron that turned their lives upside down. The pleasure of revenge - unknown and unsuspected by Americans - swelled their jubilation in 1941, when their forces at last hit back, righteously as they saw it.

Still lacking any notion of why resentment accumulated, the reaction of most Americans these sixty-five years later to Pearl Harbor remains limited to outrage and self-pity. In Japan, however, Pearl Harbor is scarcely mentioned and Perry’s intrusion is treated as seminal. The perception gulf remains gaping. One of the most widely used Japanese high school textbooks devotes three lines to Pearl Harbor, three pages to the national metaphor of Perry’s "Black Ships" and their seemingly black intent. Ishiwara Kanji spoke for many when the intellectually accomplished general told the International War Crimes Tribunal in 1947 that Perry’s sabotage of the national integrity and exposure of the country to pitiless international grabbing were responsible for the attack on America.

That wasn’t the whole truth - not nearly the only cause of the "sneak attack" (although Admiral Isoruku Yamamoto had been assured war would be declared before he launched his planes) - but a good part of it. The Black Ships never fired more than salutes, but Perry calculated they would terrify, and that’s what they did, even more than he knew. The effect on Japan then and during the following decades was vastly greater than that delivered to America by those Kates, Vals and Zeros of Yamamoto - who bore a personal grudge against the Commodore - on December 7th, 1941. The galled people with the punctured conviction of their own superiority took special pleasure in the sinking of four ships on Battleship Row: the number with which Perry first menaced them. Shouldn’t that prompt thought about the unintended consequences of using force?

1. "...the vast majority hated the idea [of contact with the West]". Actions speak louder than words. Japanese businessmen lost no time in importing foreign goods & finding goods to export. Many of the major Japanese trading companies date from this period, as do trading relationships, eg the import of timber from the US Pacific Northwest, & from British Columbia.

2. Was Japanese coal really that abundant & that good? Really good-quality steaming coal isn't that easy to find. Even Oz coal was hopeless -- the Admiralty complained bitterly about it.

3. What about the Russo-Japanese War? It was the first time an Asian army had defeated a European army (or at least a semi-European one.)Didn't it have any impact on the self-esteem of the Japanese ruling classes?

4. Is there really any evidence that the rulers of Japan had such long memories? What about the denial of trade outlets in the 1930s? denial of access to raw materials that Japan lacked almost totally?

An odd combination of an apologia for the ultra-reactionary Tokugawa Shogunate with postmodern academic Leftism. Weird. And as Dr. Dresner alludes, an improbably linear assumption of causation by tying that event to Pearl Harbor.

What if the " Strike North" faction had prevailed in the 1930's ? How would Perry be tied to a Sino-Soviet war ?

What if Commodore Perry had not "opened" Japan in 1853 ? It is far more likely that Britain or France or Germany would have done so than Japan emerging on its own.

An insular Japan stuck in the Middle Ages that would have become, like the rest of Asia, a pawn in the hands of European Imperialists (America would be excluded), which would have led to Japan enjoying the great standard of living of say the current residents of China or Cambodia or Vietnam or North Korea whose insularity made them weak, first in the face of the Europeans and then in the face of the Japanese and then the Russians and then.......

Thanks so much for your insight and your scholarship, Mr. Feifer. How can we make sure that the current administration reads your article and learns from it?

I agree with Jonathan. Feifer's thesis needs far more support than it gets here.

Three counter arguments: (1) the odds of the Japanese being left undisturbed if the US had not acted are pretty slim. The United States was hardly the only "bully" looking for coal and coaling stations. British actions in China had already caused concern among some Japanese. (2) The number of Japanese interested in learning western science and technology was small but not static. Interest was growing.
(3) The single most critical US action in the western Pacific that has a relation to Pearl Harbor was our conquest of the Philippines. Possessing them enmeshed us in the geopolitics of the region in a way that the opening of Japan did not.

Certainly the way the US acted in opening Japan had significant consequences for the Japanese. Arguably it sped westernization. But there is no reason to assume that the Japanese might not have taken a different path to westernization and to a place in great power politics.

Short version: It's too much of a straight line over a very long chain of causation in a complex situation, and the analogy to Iraq is too general to be helpful.

On the other hand, I really want to read Mr. Feifer's book, now.