Steven Knipp is a veteran journalist currently based in Asia who has also reported from Russia. 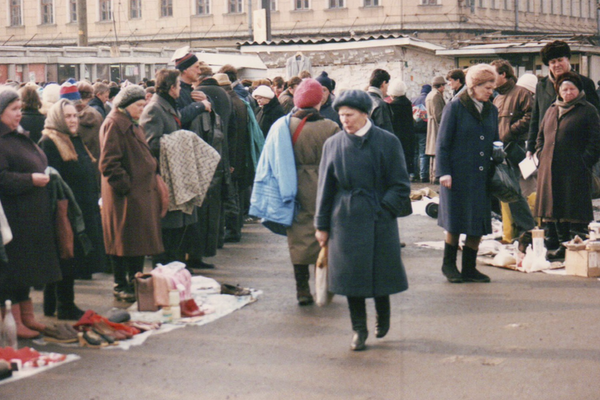 The year was 1992. Early winter. I’m a young reporter on my first trip—of many to come—to Russia. I am there to report on the 75th anniversary of the 1917 Bolshevik Revolution, which brought Soviet communism to the people of Russia.

I am thrilled to my core at my great good fortune to be in this place, at this time. I’m also blessed to have the assistance of a remarkably gifted young Moscow-based translator who was clearly elated by the many positive changes in her homeland. So unlike the fear-soaked atmosphere of today’s Russia.

So no sooner do I drop luggage in my hotel lobby, then we head to the city’s celebrated Red Square. Its original name—Krasnaya — in old Russian meant beautiful. Not red.

My cab comes to a halt near the Square. I spot a band of burly, grim-faced Russian men dressed in traditional Soviet military attire. We exit our taxi to follow them, as they march in menacing military formation through the chilly streets—the steel heels on their goose-stepping boots cracking loudly in the brisk winter air.

Their destination is the same as ours—Moscow’s sinister-sounding Red Square — the geographic heart of the once formidable Soviet Empire.

Moving in tight formation, the mostly mustachioed marchers attempt to look fierce and forceful. But this proves difficult as they parade past a three block long line of impatient younger Russians too hungry to give a hoot for old politics as they eagerly await their turn to enter the world’s biggest McDonalds.

Turning a corner, the would-be new Bolsheviks struggle to maintain their tempo, but as they march past, a freelance Russian street band starts playing a remarkably snappy version of Blue Suede Shoes, and they begin to crash into each other’s heels.

Meanwhile, the funky street band has switched to Tutti-Frutti, the sounds of which can be heard as the angry apparatchiks march by Moscow’s newest casino, all chrome and glitter. Finally, the jack-booted marchers stamp past the Soviet capital’s snazzy new neon-lit Pizza Hut. Here you can order any type of pizza you want. But you must pay in US dollars.

Approaching the Square, the comic book Reds join about 300 other old time, out-of-work communists. Most are hard line, and fur hatted, many are also spewing potent vodka fumes.

Waving huge red flags with the old USSR hammer and sickle emblem, which elsewhere in Moscow are freely sold to any tourist with a US$20 note — the marchers demand the return of Stalinist-style communism.

This 800-year-old city of nine million in high-speed, fast forward economic and social transition was as mad-cap a sight as I had ever seen before.

For breakfast, your waiter offers coffee and eggs, as well as a selection of clunky Red Army watches, which suddenly appear from his vest as he re-fills your cup.

Buying a foreign newspaper in Moscow’s new five-star Kempinski Hotel requires payment in  US dollars; but your change comes back in German marks.

Can’t get a taxi? Not a problem, comrade. Simply stick out a hand at any street corner and almost any ordinary motorist will transport you to your destination for some hard currency. One afternoon, I was able to hire a Moscow ambulance while a colleague was happily accommodated by the driver of a  Russian Army truck.

This first visit to Moscow was one of the most enriching experiences of my professional life. I knew I was literally seeing history in the making. And I was understanding, for the first time, the natural warmth, humor and surprisingly deep romantic nature of the Russian people. A spirit which for so long was buried beneath the dreary moth-bitten blanket of communism.

At that time, I was absolutely clear in my mind, beyond any doubt—that within a decade, the people of  Russia would be able to recover from the tragedy of living for so long under the weight of a ruthless, corrupt police state. And that noble Mother Russia could finally join the rest of the world as a free, open and tolerant society. After all, the evidence of what I saw and heard on the ground was everywhere. Later, many of my stories from Moscow and St. Petersburg, Tashkent to Tbilisi, reflected this uniquely naïve all-American optimism.

Little could I have imagined that less than ten years later—in May 2000, a cobra-faced ex-mid-level KGB agent named Vladimir Putin would become the all-powerful leader of Russia.

His cold-blooded cruelty surfaced early. Just three months after taking power, the Russian nuclear submarine, Kursk, suffered an internal explosion. The sub sank to the bottom of the shallow seas just off Norway.

Some of the 118 crewmen could have been saved. Both the US Navy and Britain’s Royal Navy had the modern submersibles to render a speedy rescue. But for days Putin refused to allow those navies to help. The loss of face would have been too much. Indeed, Putin did not even return from his Sochi holiday, until all the sailors had drowned.

In all these years since my first visit to Russia, I have kept in touch with my marvellous Russian translator. In 1992, she was in her twenties.

Today, she is a middle-aged woman, with two children of her own. While Western sanctions imposed on Russia because of Putin’s vicious invasion of Ukraine have not yet begun to impact her career, she is worried about that of her daughter. However, her deepest fear is for the future of her teenage son, Dmitri. She is terrified he may soon be drafted into Putin’s military, and sent across the border into the bloody buzzsaw that is his war against Ukraine.

In a recent communication, she tells me she is heartbroken about the relentless cruelty that the Russian president has inflicted on the people of Ukraine, the murders of civilians, the torture of Ukrainian soldiers, the bombings of women and children.

Like so many millions of other patriotic Russians,  “N” loves her homeland deeply. But, if given the chance, she would surely whisk her family away from Russia. If she had the sizeable savings needed to do so. Alas, she does not.

As for my avowed abilities to forecast the future, there is an old Russian saying. Roughly translated, it goes: “The horses of hope gallop. But the donkeys of experience go slowly.”