by Tom A. Jerman

Tom A. Jerman is the author of Santa Claus Worldwide: A History of St. Nicholas and Other Holiday Gift-Bringers. 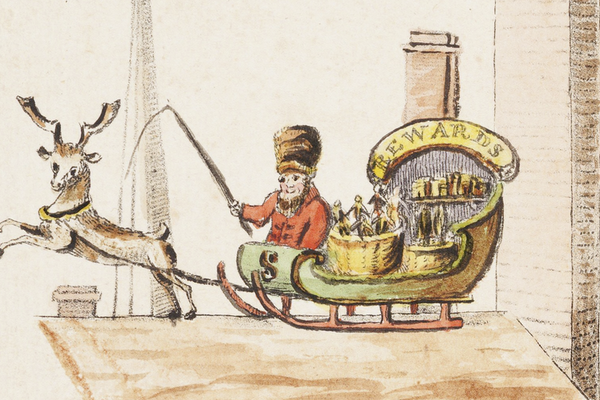 Illustration of "Old Santeclaus with Much Delight" from The Children's Friend, William B. Gilley, 1821.

In December 1953, Dr. Charles W. Jones, a University of California professor hailed as one of the world’s foremost scholars on St. Nicholas of Myra, gave a speech to the New-York Historical Society that was published the following year in the society’s quarterly under the title “Knickerbocker Santa Claus.” The premise of Jones’ speech was that author Washington Irving invented Santa Claus in an 1809 satire, A History of New York, that was purportedly written by a completely fictional Dutch historian, Diedrich Knickerbocker. “Without Irving there would be no Santa Claus,” Jones wrote. “Santa Claus was a parasitic germ until the Knickerbocker History in 1809; after 1809 Santa Claus spread like a plague which has yet to reach its peak.”

Since 1954, more than two dozen scholars have written works embracing Jones’ theory that Irving had, in essence, created Santa Claus, and no one had refuted it until my own book, Santa Claus Worldwide: A History of St. Nicholas and Other Holiday Gift-Bringers, was published in 2020. While Irving’s History had an important role in the development of Santa Claus, it was not the role Jones claimed.  Rather, Clement Moore, the author of “The Night Before Christmas,” used Irving’s History as the source of a famous scene about St. Nick placing a finger aside of his nose before ascending into the sky.

Conflating the two gift-givers was a critical error, however, because St. Nicholas and Santa Claus were two different characters and Santa was never even mentioned in Irving’s book.  The use of the wrong edition was also a critical error because Jones’ argument was based primarily on timing.  This is because the premise of Jones’ article was that there were no holiday gift-givers in America before December 1809, when Irving’s historical satire introduced St. Nicholas to America, and that Irving’s book precipitated publication of four Dutch poems about St. Nicholas during December 1810.

Even if the St. Nicholas references Jones found so significant had been in the first edition of Irving’s History, however, there was no basis for conflating the saint with Santa Claus.  Although they were both midwinter gift-givers with red outfits and long white beards, the similarities end there.  Nicholas was generally believed to be a real person; Santa was unapologetically fictional.  Nicholas was a Catholic saint who gave gifts on his feast day, December 6.  Santa was a completely secular figure who gave gifts on Christmas (or its eve).  Nicholas’ role as midwinter gift-giver was created in Europe during the High Middle Ages; Santa was created in America between 1821 and 1823.  Nicholas was a slim, stern prelate who wore the formal vestments, miter and crozier of a Catholic bishop; Santa was a jolly, chubby man was dressed in furs and covered in soot.

The belief held by many, including Jones, that St. Nicholas was the “original Santa” is equally wrong because St. Nicholas was neither the original midwinter gift-giver nor the immediate predecessor to Santa.   The original midwinter gift-givers were pagan gods, such as the Germanic god Odin, who were replaced by Catholic saints in the High Middle Ages because the church did not want pagan gods involved in celebrating Christian holy days.  The immediate predecessors to Santa, on the other hand, were the secular “terror men” who replaced St. Nicholas in the Protestant regions of Germany following the Reformation and followed German immigrants to America in the early nineteenth century.  The terror men had dozens of regional names, including several close variations of Santa Claus, wore long unkempt beards and tattered coats made of fur, and carried bundles of switches to punish wicked children.

Indeed, what Jones and other scholars have described as an evolution from St. Nicholas to Santa Claus was remarkably short and direct, consisting of two poems published in Manhattan more than a decade after the Dutch poems of 1810.  In 1821, New York printer William B. Gilley and illustrator Arthur Stansbury published The Children's Friend, Number III: A New-Year's Present to the Little Ones From Five to Twelve, an eight-page booklet that told the story of “Santeclaus,” a secular gift-giver who fit the description of the German terror men and who traveled in a sleigh pulled by a flying reindeer to leave gifts for deserving children on Christmas Eve. Two years later, on December 23, 1823, The Troy (N.Y.) Sentinel, published an anonymous poem entitled “An Account of a Visit from St. Nicholas” with an introduction titled “Sante Claus” by Sentinel editor Orville Holley.

By the mid-1800s, the poem had become widely acknowledged as the work of Clement C. Moore, an extremely wealthy, highly educated and deeply religious professor of classical languages at New York’s General Theological Seminary.  Moore was an only child whose father had served as both president of King’s College, renamed Columbia College following the Revolutionary War, and as Episcopal bishop of New York.  Many historians, however, now recognize “The Night Before Christmas” as the joint work product of Gilley and Moore.  Gilley’s print shop at No. 92 Broadway was directly across the street from Trinity Church at No. 89 Broadway, where Moore taught, worshiped, and probably did business with Gilley.

Moreover, the similarities between The Children’s Friend and “A Visit from St. Nicholas,” such as the gift-giver’s arrival on Christmas Eve in a sleigh pulled by flying reindeer, are impossible to explain unless one assumes that Moore copied Gilley.  The most common theory is that Moore bought a copy for one of his two older daughters in 1821 but decided its emphasis on corporal punishment was inappropriate for his young family.   Accordingly, Moore rewrote Gilley’s poem during 1822 to make it the warm-hearted, family-friendly poem we have grown to love.