Jordan Baker holds a BA and MA in History from North Carolina State University. While in school, his research focused on empire and the French Atlantic. Since graduating, he has expanded his research and writing to include any and all topics related to the Atlantic World in general. He also blogs about history at eastindiabloggingco.com. 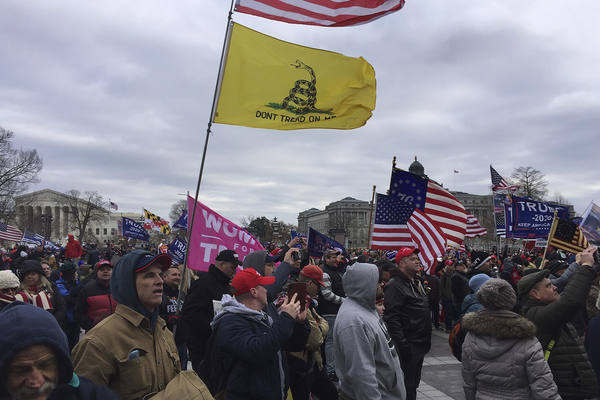 The Gadsden Flag on display near the US Capitol, January 6, 2021.

Americans love the symbols of our national past. And some of the strongest come from the very moment of the nation’s birth, the American Revolution. From the near endless number of volumes dedicated to men like Washington, Franklin, and Jefferson, to reproductions of the famous Betsy Ross flag, symbols of the Revolution abound in modern America.

One symbol, however, has endured in a controversial way. The Gadsden Flag, first flown in 1776, has taken on a completely different meaning in the centuries since its creation. Unlike the founding national heroes or Betsy’s flag, the Gadsden Flag has transformed from a symbol of liberalism to one of far right conservatism. But how?

Before we dive into why the meaning of the Gadsden Flag has changed since the Revolution, we must first understand the political philosophy of its creator. Born in 1724 in Charleston, South Carolina to Lieutenant Thomas Gadsden of His Majesty’s merchant fleet, Christopher Gadsden grew up with all the advantages eighteenth-century life could afford. His parents were wealthy and well connected, he was sent to England to receive a classical education at the age of 16, and, after finishing his schooling, he launched a prosperous career as a merchant, first in Philadelphia, then in his hometown of Charleston.

Like most well-to-do American colonists of his time, Gadsden seems to have believed heartily in the rights of Englishmen. In one of his writings, he proclaimed that it is “better that some, or every individual, should suffer any temporary inconveniences or hardships, than to run any risk of sapping this great rock of their lasting salvation in this world, that of the freedom of parliaments or assemblies.” Clearly, to Gadsden, representative government was the bulwark against tyranny, and worth sacrificing one’s own personal comfort to protect.

When the American Revolution began, Gadsden joined in the fun. Unlike other South Carolinian leaders, however, Gadsden pushed for uniting the colonies from the get-go, rather than allowing themselves to be torn asunder by regional interests. Gadsden’s early stance for uniting the 13 colonies created such a stir that even John Adams remarked that there was no one more committed to the cause than Gadsden—and Adams frequently liked to boast about how much he himself had given to the cause.

Though Gadsden went on to serve with the American land forces throughout the duration of the war, he created his famous flag for the nascent American navy. In 1776, South Carolina officials recorded how:

“Col. Gadsden presented to the Congress an elegant standard, such as is to be used by the commander in chief of the American navy; being a yellow field, with a lively representation of a rattle-snake in the middle, in the attitude of going to strike, and these words underneath, ‘Don't Tread on Me!’”

The Gadsden Flag was born. And its symbolism was readily apparent to combatants on both sides of the Revolution. In the centuries since it first flew over the ships in Charleston’s harbor, however, its meaning has become obscured.

The words on the flag more or less speak for themselves. Gadsden felt that his constitutional right to representation in Parliament had been trod upon by the British government. Thus, the “Don’t Tread on Me” warning emblazoned on the flag. The snake, however, has a more interesting history.

A North American species, rattlesnakes had been unknown in the Old World prior to European colonization efforts. After the European discovery of the rattlesnake, it quickly became associated with the New World. In Britain, this meant the rattlesnake became a powerful symbol of the 13 colonies that would later rebel.

Taking advantage of having such a fearsome creature as their representative in the European mind, it didn’t take long for American cartoonists to begin using the rattlesnake to get their points across. Perhaps the most famous example, the Join or Die political cartoon by Benjamin Franklin, was created as an appeal to British colonists to unite in defense against France and her Native Nation allies during the French and Indian War.

By having a coiled rattlesnake emblazoned upon this flag, Gadsden was evoking this symbolism, and thus the notion of America itself. With the now famous words “Don’t Tread on Me” directly under the snake, the flag conveyed that American rights could not be skirted by Parliament or the king.

Despite the impression Gadsden and his flag made on those that saw them in action, the yellow banner with the Don’t Tread on Me symbol boldly emblazoned on it was largely forgotten for many years. When the libertarian movement began to pick up steam in the 1960s and 1970s, the Gadsden Flag made a sudden reappearance (even if only in small circles).

Despite Christopher Gadsden’s personal liberalism and belief in a united United States, the striking symbol of the rattlesnake and the bold phrasing, “Don’t Tread on Me,” attracted conservative Americans interested in minimal government and protecting individual rights. The libertarians thus flew the Gadsden flag as a symbol of defiance against an American government that had become too far reaching for their comfort. “Don’t Tread on Me,” became an appeal to the defense of what libertarians viewed as their constitutional, individual liberties.

The Gadsden Flag remained a popular symbol within these political circles for decades. Indeed, as recently as 2016, a self-professed libertarian on Quora described his view of the flag as follows:

“Part of being libertarian is the idea that force becomes necessary when force is used against you. The simple idea of self defense. This flag represents that idea. A "stand together or fall separately" type ideal when opposing an overwhelming state. The snake itself, often coiled, is in a defensive posture. If tread upon it will bite. Basically stating, tread upon my liberties and I will be forced to act since I am being attacked.”

While libertarians weren’t the only group to make use of the Gadsden Flag - the MLS club Philadelphia United once used its coiled rattlesnake design within their crest - political groups inclined to fear government overreach became naturally drawn to the “Don’t Tread on Me” phraseology.

Groups with this political bent tend to sit on the right in the American political spectrum. And, typically, the farther right one goes on this spectrum, the more common limited government ideologies become. Thus, a design that spoke out against allowing governments to restrict individual freedoms became a natural fit within these political communities.

When discussing the Tea Party, a conservative political that publicly proclaimed the ideals of limited government, in their 2016 book The Tea Party and the Remaking of Republican Conservatism, authors Theda Skocpol and Vanessa Williamson noted: “The ‘Tea Party’ symbolism was a perfect rallying point since it brings to mind the original American colonial rebels opposing tyranny by tossing chests of tea into Boston Harbor. It signifies patriotism, and has a visceral meaning to people who feel that the United States as they have known it is slipping away.”

Much the same could be said for the Gadsden Flag. As the United States continues to change, some will be inclined to view the way the government responds to these changes as tyranny. And, what better way to respond to tyranny than how our Founding Fathers did?

More recently, the MAGA movement has co-opted these fears of government overreach through the spread of misinformation around the 2020 presidential election. Through these misinformation campaigns, they won some followers from among the believers in limited government. If you can make a person believe the election was actually stolen, it’s not a big leap to make that same person think they need to stand up to the tyranny of oversized, unrepresentative government—just like the Founding Fathers.

Because of this, sadly, Gadsden’s flag flew over the capitol on January 6, 2021. If the rattlesnake poised to strike will swing left and once again become a symbol of liberalism, only time will tell.