Writing My Father Into History

Stephen G. Rabe served as the Ashbel Smith Chair in History (emeritus) at the University of Texas at Dallas, where he taught for forty years.  He concluded his career teaching at the Clark Honors College of the University of Oregon.  A specialist in the history of U.S. foreign relations, he has written or edited thirteen scholarly books.  His newest book is The Lost Paratroopers of Normandy: Resistance, Courage, and Solidarity in a French Village (Cambridge University Press).  Dr. Rabe is a veteran of the U.S. Marine Corps. 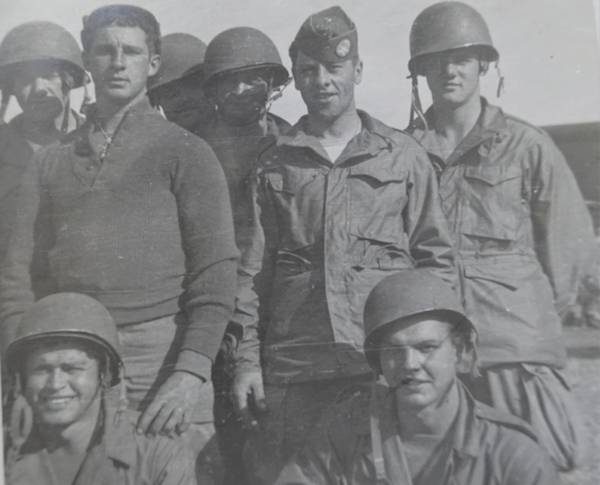 These are paratroopers before D-Day.  The author’s father, S/Sgt. Rene Rabe, is in the sweater.  His hands are on the shoulder of Private Arnold Martinez who was killed by an artillery blast at Graignes.  Kneeling next to Martinez is Corporal Homer Poss, who was badly wounded by the same mortar blast that hit S/Sgt. Rabe.  Photograph owned by author.

I became a historian in 1953 at the age of five.  I remember sitting on my father’s lap, while he read the evening newspaper and smoked.  My father had spent the day in hard physical labor as a cable splicer, perched high on a telephone pole.  Rene Emil Rabe (1923-1982) had numerous tiny holes in his face.  He would rub his face and display to me a fleck of shrapnel that had worked its way to the surface of his skin.

The flecks of metal were remnants of a German mortar shell that had hit his position on March 28, 1945.  Four days previously, Staff Sergeant (S/Sgt.) Rabe had jumped with the 507th Parachute Infantry over the Rhine River into Germany.  This was his second combat jump.  Rabe’s regiment had been part of the legendary 82nd Airborne Division that had led the assault on Fortress Europe on D-Day.  He and his company hit French soil at 2:38 a.m.  Between the combat jumps were several weeks of vicious fighting during the winter of 1944-1945 in frigid Belgium during the Battle of the Bulge.  Rabe also pulled occupation duty in Berlin and participated in the Allied Victory Parade through the Brandenburg Gate and down the once-magnificent boulevard Unter den Linden.  S/Sgt. Rabe had made one of the most epic journeys in human history—from Normandy to Berlin.  Along the way he collected four promotions, three bronze stars and two Purple Hearts, and left part of an amputated, frost-bitten toe in Belgium.

After I was awarded my Ph.D., in 1977, I told myself I would write something about my father’s journey.  I had a good knowledge base.  My father let me listen in when he discussed his experiences with my four uncles, all veterans.  I also accompanied him to military reunions and made friends with the children of the paratroopers.  And my professional training had taught me how to negotiate my way through archival material.  But for over forty years, I did little.  Academic life got in the way.  Moving through the ranks, securing an endowed chair at a university requires publications.  Once a scholarly reputation is established, appealing offers to join other projects and to teach abroad inevitably follow.

Retirement freed me from the pleasant whirl on the academic carousel.  I originally had the inchoate and too self-referential idea of physically tracing my father’s journey through Europe and writing about my experiences.  But what I decided on was to investigate one story that always intrigued me.  My father told me that “a friendly farm family” in Normandy had hidden him for three days in the loft of a barn.  The family relieved his ravenous hunger by serving him cabbage with melting butter.  He repeatedly proclaimed at dinner time that it was the best meal that he ever had.  The story had the added weight of reminding the three Rabe children to appreciate the food that our mother had cooked.

My father’s harrowing experience occurred in the week after June 6, 1944.  On D-Day, approximately 160 paratroopers from the 82nd and 101st Airborne Divisions landed hopelessly off target near Graignes, a village of 900 citizens.  The villagers asked the paratroopers to stay in Graignes to defend them from German occupiers.  In turn, the men and women of Graignes served the paratroopers, finding their equipment in the surrounding swamps, conducting reconnaissance missions, and organizing a cooking campaign that provided the paratroopers with two hot meals a day.  On June 11-12, 1944, superior forces of the 17th Waffen-SS Panzergrenadier Division attacked the village.  The Nazis were moving towards the strategic town of Carentan, situated between Utah and Omaha Beaches.  When they ran out of ammunition, the paratroopers withdrew from Graignes.  They had suffered about thirty battlefield deaths.  The battalion surgeon and medics agreed to stay behind with wounded paratroopers.  The Waffen-SS murdered the wounded Americans and medical personnel.  The Nazis also slaughtered four villagers, including the parish priest, for the crime of ministering to wounded paratroopers.

Despite witnessing war crimes, which included the destruction of their historic church and the torching of their homes, the villagers stayed strong, escorting paratroopers to safety and hiding other paratroopers in their homes and barns.  Along with twenty other men, my father survived with the courageous aid of the Rigault family.  A German patrol entered the family barn but did not venture into the loft where the Americans were hiding.  The family subsequently arranged on June 15, 1944 for the paratroopers to be transported at night in a canal boat to the safety of U.S. forces in Carentan.  By this time, U.S. forces had liberated Carentan, which is ten kilometers north of Graignes.  The villagers had saved about 110 paratroopers, most of whom subsequently accompanied S/Sgt. Rabe on the epic journey through Europe.  In the Rhineland area, the paratroopers of Graignes liberated thousands of Eastern European slave laborers from their nightmare existence in Nazi war factories.

In writing my father into history, challenges confronted an academic historian.  Legitimate questions of conflict of interest, credibility, and bias arose.  I found, however, that these questions could be addressed.  My father made no major decisions at Graignes.  He was a private first class on D-Day, although he would receive a battlefield promotion to corporal, because his mortar team destroyed a German mortar at Graignes.  His stories were subjected to the same test I applied to interviews and memoirs of the French, German and American participants.  Could the tale be sustained by a second source?  My father recounted that, shortly after landing in Normandy, he and Private Willie Coates took out a German motorcycle and sidecar.  But I left the relevant incident out of the book, because I found scant information on Private Coates.  On the other hand, the post-traumatic stress disorder that afflicted my father and most paratroopers could be proven.  In middle age, S/Sgt. Rabe suddenly became frightened of bodies of water and could no longer put his head underwater.  He told my brother that water prompted visions of drowning paratroopers in his mind’s eye.  The Germans had backed up the rivers of Normandy, flooding the fields.  Numerous paratroopers drowned on D-Day, as they became entangled in their parachutes.  Private Harold Premo, who jumped two places behind my father, drowned.

The story of Graignes is principally about the villagers, especially the women of Graignes.  Women surreptitiously entered occupied villages to find food supplies for the paratroopers.  The Rigault sisters, Odette and Marthe, found paratroopers hiding in hedgerows and led them to the family barn.  Marthe Rigault recently celebrated her ninetieth birthday.  On her mantel is a commendation to her father from General Dwight Eisenhower and letters of appreciation to the family from Presidents Ronald Reagan and Barack Obama.  Also displayed is the Distinguished Service Medal that she and Odette received in 1986 in a grand ceremony presided over by the Secretary of the U.S. Army.  It is an overwhelming experience to meet someone who saved your father’s life and made the life of your little grandson possible.  On this issue, I confess bias.