The Long Road to Redress in Ireland 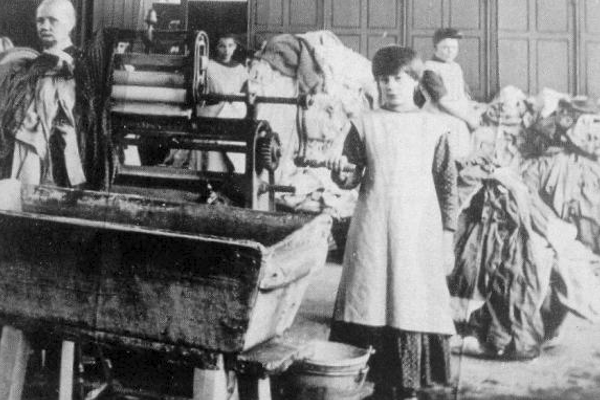 Earlier this year the Republic of Ireland announced plans for a National Center for Research and Remembrance located at a former Magdalen Laundry in Dublin. It is envisioned as “a site of national conscience” to remember not only those women forced to work in the network of 10 laundries, but also the women and children abused at Mother and Baby Homes, industrial schools, reformatories, and other institutions, mostly run by the Catholic Church but licensed and funded by the Irish state. The proposal calls for a museum and exhibit space, research center, and space “for reflection and remembrance.”

In October, the Irish government introduced an online service that for the first time will provide access to birth certificates and other early life information for people adopted, boarded out, or subject to other illegal birth registration practices, usually through the institutions mentioned above. More than 16,000 people have expressed a preference to see the previously hidden details, and they are likely to include some of the at least 2,000 children sent from Ireland to the United States from the 1940s through the 1970s.

Additional corrective measures, including financial restitution, have resulted from five major investigations of institutional and gender-based abuses in the Irish state and Northern Ireland, still part of Great Britain, over the last 20 years. If this sounds like Ireland is coming to grips with its century-old legacy of civil and human rights abuses of women and children, that would be only partly correct, according to survivors and their advocates. These government responses “have frequently hampered or excluded other avenues of accountability that should ordinarily be available in the democratic state,” write the three co-editors of Redress: Ireland’s Institutions and Transitional Justice. The collection of two dozen essays by survivors, including several in the United States, scholars, and journalists from both sides of the Atlantic was published in May by University College Dublin Press. The  U.S. release is expected by the end of the year.

James M. Smith, associate professor in the English department and Irish Studies Program at Boston College, is one of the co-editors and an advocate on these issues for more than 20 years. He published Ireland’s Magdalen Laundries and the Nation’s Architecture of Containment in 2007, in addition to other scholarly articles. Smith is a co-founder of Justice for Magdalenes Research (JFMR), which works to educate the public about such institutions and support surviving women and their families. In 2021, the five members of JFMR also published Ireland and the Magdalene Laundries: A Campaign for Justice, which details their struggle to help bring about an official apology and redress.

This question-and-answer exchange with Smith grew from the U.S. introduction of Redress at Boston College on September 6, 2022, also attended by co-editors Katherine O’Donnell, associate professor School of Philosophy at University of College Dublin, and Maeve O’Rourke, assistant professor at the Irish Center for Human Rights at the University of Galway. The content below was shaped from my Oct. 13 interview with Smith at his BC office and through email exchanges.

HNN: What is transitional justice?

JS: The United Nations’ definition refers to the full range of processes and mechanisms associated with a society’s attempt to address the legacy of large-scale past conflict, repression, violations, and abuses. Scholars frequently describe the approach as comprising four key pillars: truth-telling, accountability, redress and reparation, and guarantees of non-recurrence. It is also important that these pillars should operate simultaneously, not a la carte. It is a holistic approach.  And, it is critical that those who have been affected are placed at the center of the process. Finally, it is an approach founded on the application of international human rights law.

JS: As many of the essays in the collection make clear, these same structures continue as a political arrangement that exerts power over survivors, adopted people and generations of relatives, and over the remains and memories of the dead. Look at the recent State investigations—they largely operated in private, they sequestered documents and testimony that are crucial sources of testimony, they failed to use human rights law as a framework of analysis or as a guide to ensuring procedural fairness, and survivors, family members and even the Irish police have been prohibited from accessing the inquiries’ archives. Likewise, if one turns to the three ensuing redress schemes—the Residential Institutions Redress Board (RIRB), the Magdalen Ex-Gratia scheme, and the proposed Mother and Baby Homes redress scheme—they invariably decommission applicants’ other legal rights by requiring them to sign waivers in advance of accessing financial compensation. Industrial school survivors understand themselves to be “gagged” from speaking in public about their experience before the RIRB. The proposed Mother and Baby Homes redress scheme is notable for whom it excludes: infants who left the home under six months of age, boarded out children, and survivors from “care” settings not investigated under the recent Commission’s mandate. The title of the Ombudsman’s 2017 report on the maladministration of the Magdalen scheme encapsulates the State’s record to date in providing redress for so-called historical abuses: Opportunity Lost.

HNN: This legacy of church/state institutional abuse has been largely ignored in Irish historiography, with some exceptions. Is this changing?

JS: Yes, and yes. There was early work on these institutions in the nineteenth-century, including by Joseph Robins, Jane Barnes and Frances Finnegan. Historians of women have led the way with important scholarship by Maria Luddy, Lindsey Earner-Byrne, and Sarah-Anne Buckley, among others. Social scientists too, especially Paul Michael Garrett and Eoin O’Sullivan have made crucial contributions, as did the late investigative journalist Mary Raftery. But the fact remains that the Irish state impedes further research by limiting access to its archives and by sealing the archives of recent investigative bodies. There is a notable pattern here. The Department of Education in 2019 tabled the Retention of Records Bill, which proposed placing more than 2 million documents related to the Commission to Inquire into Child Abuse beyond access for 75 years. The archive of the McAleese Committee on State involvement with the Magdalen Laundries meanwhile remains in the Department of An Taoiseach (Irish prime minister) “for safe keeping” but not for the purposes of public records requests. And, the Mother and Baby Home Commission archive is also sealed for 30 years; although a prolonged public campaign in 2020 forced the government to uphold survivors’ rights to access un-redacted personal information in the State’s possession as required under European Union legislation. Historical precedent is not our friend on this front. As Raftery and O’Sullivan remind us about earlier child residential institution investigations, “not a shred” of material related to the Cussen Committee in 1936 survives and the “working files” of the Kennedy Committee in 1970 have also “disappeared.” The Irish state cannot now be allowed to disappear material from the more recent investigations.

HNN: You and your colleagues have urged an interdisciplinary approach to transitional justice that incorporates traditional legal and political science scholars and centers for the study of human rights, with the humanities, social sciences, and the creative arts. Is the approach being embraced?

JS:  This is a complex history, and the different disciplinary perspectives are valuable in that they underscore how much can be contributed from different vantage points. Our collection offers perspectives from other jurisdictions (Canada, Australia, the UK); it is important that we learn from international best practice. The book’s essays offer diverse scholarly ideas for how Ireland might conduct “redress” and “investigation,” and thereby “justice,” differently when it comes to our history of gender-based, institutional, and family separation abuse. We open the collection with a section entitled “Truth-telling” and an essay entitled “Testimony,” which gathers evidence from eight survivors, residents of Ireland, the United Kingdom and the United States. This history is also diasporic! Likewise, we reprint long-form journalism by Dan Barry, Anne Enright, and Claire Wills because their interventions drew international media attention to survivors’ voices, helping to counter what Katherine O’Donnell in her essay defines as the “belligerent ignorance” of the Irish establishment. Other essays utilize theories of vulnerability and “disremembrance,” for example, to challenge the State’s epistemic injustice toward survivors. So, an interdisciplinary approach helps cultivate new forms of knowledge and different kinds of expertise to help understand aspects of Irish society traditionally silenced and/or eclipsed.

HNN: Earlier this year you wrote in the Irish Times that after all the investigations, reports, and redress schemes, “some critics” have argued “these elements of our past are done and dusted.” Who are the biggest critics or obstacles to this transitional justice effort? Is there a danger of redress fatigue?

JS: The Irish state remains the chief culprit. Its default response in redressing these wrongs has been to compartmentalize the various aspects of this history as if they were separate and distinct, when in fact they are interconnected, even dependent. Many of the same families, often socially vulnerable across multiple generations, were impacted by these entwined institutional practices. In the same vein, the State heavily manages and curtails participation by survivors in inquiries, in designing redress measures, and in accessing information. The Catholic Church too, and the relevant religious orders, have yet to contribute financially to the Magdalen or the Mother and Baby Homes redress schemes, and there is widespread dissatisfaction with their contributions to the RIRB fund—the taxpayer picked up the majority of the approximately €1.5 billion ($1.48 billion) cost. And, much like the State, the religious also seal their archives, claiming that these are private and should not be subject to public scrutiny; this despite the fact that human rights violations occurred and the Church was providing a public service, oftentimes regulated and funded by the State. Church and religious archives including administrative records and personal information are indispensable to the truth-telling process. Redress fatigue is a luxury we cannot afford. We must draw down the lessons of the recent past, effect reforms, and thereby ensure guarantees of non-recurrence of related abuse in the present and the future.

HNN: What’s next in this effort?

JS: The work of advocating for real redress continues—redress that includes all survivors of Mother and Baby Homes including infants under six months and “boarded out” children; redress that guarantees access to information for all adopted people and their mothers; redress that ensures coroner investigations into infant deaths; and redress that reflects the systemic racism in Ireland’s childcare institutions. In all instances, the rights of survivors and family members must be prioritized! But academics have important roles to play too—our collective expertise can complement that of survivors in helping to shape the conversation around and ultimately the design of the proposed National Center for Research and Remembrance. The Open Heart City collective points the way in this regard. We can continue to facilitate the creation of archives, including oral history projects, that help counter the silence cultivated by Church and State—both the JFMR Oral History Project and the University of Galway Tuam Oral History Project signal what is possible. And, we can embrace Transitional Justice’s pedagogical imperative to teach our students about Ireland’s treatment of the socially marginalized and thereby combat contemporary complacency and help create a bulwark that will combat non-recurrence of these abuses in society today.