Scott Huffard is an Associate Professor of History at Lees-McRae College. He is the author of Engines of Redemption: Railroads and the Reconstruction of Capitalism in the New South, published by the University of North Carolina Press in 2019, and he is currently working on a book about the life and legend of Casey Jones. 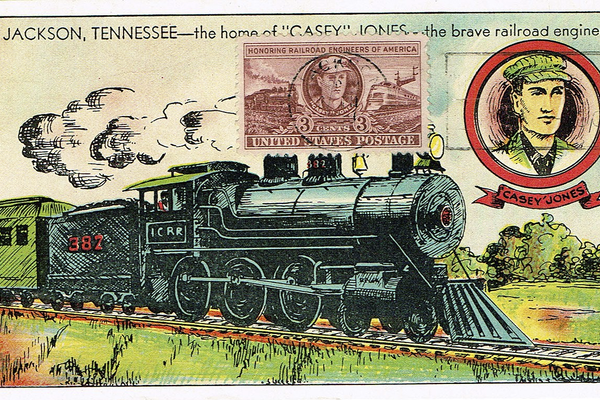 With a potential railroad strike in the news, Americans are learning quite a bit about the poor working conditions on the freight railroads that keep this country running. Railroad workers threatening to strike have complained about poor pay, dangerous working conditions, and punitive attendance policies. If Americans think about the stereotypical railroad engineer, perhaps Casey Jones comes to mind. Casey Jones, who crashes to his doom in a famous song from the Grateful Dead, a folk ballad, vaudeville hit, and countless parodies, has become the almost universal stand-in for a railroad worker in American culture. Yet despite a haze of mythology, there was a real Casey jones, and his work life tells us much about railroad work in the past and present.

As Casey Jones songs spread around the nation, engineers and their friends from across the country claimed to be the “real” Casey Jones, a fact that tells us just how universal his experience was. But most folklorists find John Luther Jones, an Illinois Central engineer who died in a 1900 train wreck near Vaughan, Mississippi, to be the most credible of these claims. While we do not know all that much about his life, we do know what it was like to be an engineer for the Illinois Central, and the story of the real Casey Jones reminds us that there is nothing new about the grievances of modern rail workers.

There has generally been a perception among labor historians that engineers were part of the aristocracy of labor and to be sure, they did enjoy a level of privilege far above most Gilded Age workers. Engineers were better paid than most railroad workers and held one of the best paid and valued positions (outside of management) in railroad companies. Casey Jones was a member of the Brotherhood of Locomotive Engineers, but this was one of America’s more conservative labor unions. Instead of pushing for large scale strike action or systemic change, the BLE organized skilled workers and mostly fought for incremental gains for engineers. This perception of engineers as aloof from labor struggles likely is what inspired IWW songsmith Joe Hill’s parody version of “Casey Jones (the Union Scab),” which imagines Casey Jones as a company toady.

Despite the advantages engineers had, within Casey Jones’s lifetime, from the 1860s to 1900, engineers on the Illinois Central experienced a stunning downfall in terms of their independence and control of the workplace. In the earlier days of railroading, engineers were assigned to a specific engine, but by the turn of the century most railroads were continuously running engines and switching up crews at points along the line. So Casey’s run from Memphis to Canton was just one segment of a longer journey from Chicago to New Orleans and companies essentially used engineers like interchangeable parts to plug into different runs as needed.

Casey and his fellow engineers were bound by a dizzying array of rules in a thick rulebook and discipline for violating these rules was arbitrary and often brutal – in 1897 one master mechanic with the IC estimated that a quarter of the engineers who worked under him in the previous three decades had been fired for disciplinary reasons. Engineers were once paid a stable monthly wage but the Illinois Central shifted this to a per mile rate in the 1870s. Perhaps this is why Casey, on his final day, agreed to take on a second run in a twenty-four hour period. As Sim Webb, his fireman, later related, they got into Memphis in the morning and barely had enough time for a full sleep before leaving again.

The late-nineteenth century also witnessed a reckless speed-up on the rails that mirrors today’s railroad companies’ push for efficiency and austerity. Companies pushed workers to run trains at faster and faster speeds, and with much fanfare they rolled out fast mail trains. A traffic manager or executive could create an aggressive new timetable for a route but it would be up to engineers to make this speed-up happen on the ground. Trying to make up time on the IC’s fast mail schedule was ultimately what killed Casey Jones, as he wrecked while pushing his train to higher and higher speeds and did not see a backed-up freight on his track until it was too late.

By the 1890s, train wrecks were surging in the United States, driven by new traffic demands, higher speeds, and the financial woes of railroads following the Panic of 1893. The carnage got so bad that an entire genre of American folk song emerged – the train wreck ballad. So we remember many of these fast trains not for their speed records, but for the grisly wrecks they caused, such as Casey’s and the “Wreck of the Old 97” that left engineer Steve Brady “scalded to death by the steam.” Yet even these ballads whitewash the horrors and turn what are systemic issues into personalized, man vs machine struggles, and in some cases even make a mockery of the dead engineers. The final line of the 1909 vaudeville version of Casey Jones’s ballad promises his grieving children that "they have another papa on the Salt Lake Line."

Just as COVID-19 has exposed deep inequalities in America and stirred new labor unrest in 2022, disease framed the work life of Casey Jones. Outbreaks of yellow fever, a terrifying mosquito borne ailment, raced up southern rail lines in the late nineteenth century, rendering engineers as nineteenth century “essential workers.” Engineers had to run trains into infected areas and confront both the threat of disease and the threat of violence from townspeople enforcing local quarantines at the barrel of a gun. In an 1878 outbreak, hundreds of railroad workers in the Mississippi Valley were sickened or killed while working through a devastating epidemic. During outbreaks, which periodically flared up in the summer months, many engineers refused to go out on runs and countless others left the company altogether. Casey Jones got his job with the Illinois Central due to fever-induced vacancies, and he ended up in quarantine in Yazoo City, Mississippi a year before he died.

Finally, Casey Jones reminds us that then and now, railroad labor can be a canary in the coal mine for the ills of the broader American working class. If anything, the railroad strikers of 2022 have echoed a building critique of corporate power in America that started in the aftermath of the Great Recession and Occupy movements and that has accelerated with the COVID-19 pandemic. Why, today’s strikers ask, can companies rake in massive profits for shareholders while preaching austerity for workers? This is a question that has broad relevance for the American working class, which is being squeezed by rising costs of living, low wages, and the continued struggles of laboring during a deadly pandemic. Only time will tell if 2022’s railroad labor unrest is a preview of broader labor insurgency, but already, the signs from a broad spectrum of the economy point to yes.