Marcus B. Weaver-Hightower is Professor of Foundations of Education at the Virginia Tech School of Education and the author of Unpacking School Lunch: Understanding the Hidden Politics of School Food. 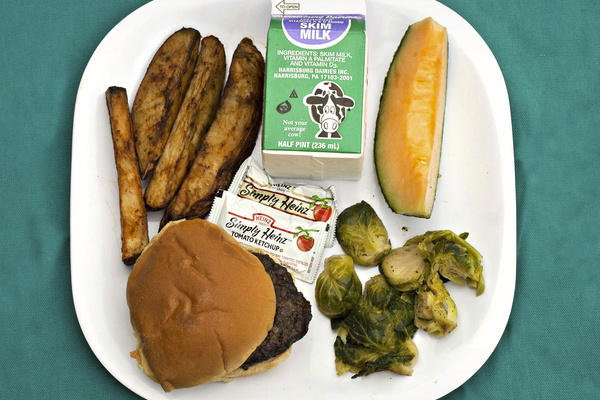 Children around the United States are beginning to make their either excited or grudging way back to school in 2022, and things look different in the COVID-19 pandemic’s waning days.  Masks and social distancing are largely gone, of course.  Perhaps just as consequentially, though, a less visible pandemic intervention is ending: universally free school meals.

For a bit more than two school years (March 2020 to June 2022), lunchrooms participating in the National School Lunch Program—both public and non-profit private schools—were allowed waivers to both feed all students free meals, regardless of income, and, in an effort to stop the pandemic’s spread, to provide those meals outside of normal times and locations.  These flexibilities acted as a social safety net amidst periodic school closings, mass economic disruptions, job losses, and supply chain difficulties.  Millions were spared from hunger during the pandemic through the school lunch program.

So when renewal of free school meals waivers came up in Summer 2022, alongside the pandemic’s apparent end, Senate Republicans decided it was time to return to the age-old tripartite payments for school breakfasts and lunches (free, reduced-price, and full-priced).  Back to paperwork requirements and their many failings.  Back to treating food as something different from other necessities of long school days, not free to students like textbooks, teacher time, bathrooms, worksheets, gym equipment, and bus trips to school.  Food was back to being a morality-laden object one must apply for to get for free, back to being treated as welfare, with all the stigma that entails.

Yet the National School Lunch Program (NSLP) and, later, the National School Breakfast Program (NSBP) were never intended as simply welfare.  That was one intent, of course, but these programs have had many—and sometimes insidious—purposes historically.  To simplify somewhat, the NSLP and NSBP’s path has been characterized by resistance and limiting by political conservatives alongside often excruciating incrementalism by political progressives.

Social progressives started the first US school feeding programs in larger cities as charitable initiatives to integrate (or assimilate) growing numbers of immigrants and ameliorate poverty’s devastating social and educational effects.  The Children’s Aid Society of New York was among the first, starting in 1853, but other major cities followed, albeit strikingly slowly, with Los Angeles’s not forming until 1921.

The states and the federal government largely stayed out of school feeding until the 1930s, when the Great Depression necessitated the first emergency uses of widespread school meals—a telling precursor to the COVID-19 pandemic.  Feeding programs’ growth was aided by newly available Works Progress Administration labor and new agricultural surplus programs that sent commodities to schools.  Just as then, a major function of current school food programs is stabilizing agricultural markets by purchasing and distributing surplus agricultural products (about $1.3 billion in 2019).  This also explains why the US Department of Agriculture (USDA) administers child nutrition programs rather than, say, the Education Department or Health and Human Services.

Another purpose of school meals has been national defense.  With the beginning of US involvement in World War II, and the surplus labor and foodstuffs being directed to the warfront, the number of schools participating and commodities supplied declined precipitously.  Yet major concerns were raised about military preparedness.  Lewis B. Hershey, head of the Draft Board, estimated one-third to two-fifths of recruits got rejected by the military for “disabilities directly or indirectly connected with nutrition,” so feeding school children became a military priority.  President Franklin Roosevelt’s May 1941 White House National Nutrition Conference for Defense—mere months before the Pearl Harbor attack—turned to nutrition scientists for guidance in transforming the American diet, and these scientist-reformers had long advocated for school lunches. In addition to creating the first national nutritional recommendations, including the now iconic “recommended daily allowances” (RDAs) and “food groups,” this conference began what would become a longstanding connection between the NSLP and military ends.  Indeed, to this day, the NSLP legislation’s very first rationale is its being “a measure of national security.”

Having seen school meals’ value during the war, many in Congress pushed to make a permanent program after.  The culmination was the National School Lunch Act, which Harry Truman signed in 1946.  The creation of the Act, though, highlighted an under-discussed but powerful dynamic in school meals: race.  As Susan Levine recounts in School Lunch Politics, Georgia senator Richard Russell, whose name the law now bears, and Louisiana senator Allen Ellender explicitly advocated segregated schooling and white supremacy, and they held off all attempts at direct federal oversight of the program. They insisted that passage would depend on establishing a state-based system that kept federal officials from interfering with “local custom”—a euphemism for segregation, Jim Crow laws, and institutionalized white supremacy.  Thus our federally funded but state-run program today.

After initial creation, the NSLP’s expansion was slow and poverty amelioration was clearly a low priority.  Not until the mid-to-late 1960s was attention paid to the program’s hunger relief effects, or lack thereof.  Subsequently the 1970s saw dramatic expansion of both funding and programs, including the National School Breakfast Program (inspired by, or perhaps to counteract the successes of, the Black Panther Party’s free breakfast program); Women, Infants, and Children (WIC); elderly programs; and summer meals for children.  Indeed, the federal investment in feeding programs grew tenfold during the 1970s.  Such efforts, ironically, began connecting in the public’s mind school feeding with poverty reduction—welfare—rather than a public good for all.

The 1980s cemented this welfare image, largely through concerted efforts by Ronald Reagan and other conservatives.  They blamed the nation’s late-70s economic difficulties on federal social program spending, portraying the programs as wasteful, fraud-prone (his “welfare queen” image), and encouraging of dependency.  The Reagan Administration annually but unsuccessfully pushed to end federal oversight of school food, and perhaps would have without the infamous “ketchup as a vegetable” debacle.  Still, Reagan successfully reduced subsidies, hiked reduced-price meal charges, ended equipment grants, and increased paperwork for free and reduced-price meals.  The result was a devastating dropout of nearly one-fourth of the programs’ participants—in real terms, millions of children had to stop eating school meals.

For many years thereafter, Congressional and USDA actions tinkered around the edges of school meals without trying to end the relatively popular program.  Then, the Obama Administration’s Healthy Hunger-Free Kids Act of 2010 made perhaps the largest—but still incremental—changes to the programs, adding a non-inflationary six cents per meal and crafting relatively strict nutritional requirements.  That Act brought a new purpose, public health, squarely to the fore, particularly to halt rising obesity levels and attendant health problems.  The Trump Administration fought to roll back most of those nutritional requirements, even into the months after his 2020 electoral defeat, but they ran out of time.  Yet such legislative and rulemaking fights have done little to alter the perception that school lunches and breakfasts are welfare rather than serving a broader public good.

The COVID-19 pandemic, if one could claim an “upside,” provided the US a chance to change the school-food-as-welfare narrative.  Indeed, so many upsides come with universally free school meals.  With free food for all, children were treated to high-quality meals; a 2021 Journal of the American Medical Association article found that school food “had the highest overall diet quality of any source,” including restaurants and grocery stores.  Healthy Hunger Free Kids Act nutrition standards have shown to reverse trends in obesity in low-income children, and the pandemic waivers spread that benefit to all.  Free meals also meant that schools could stop worrying about parents turning in correct paperwork, with all the false negatives for eligibility it creates.  Cafeterias didn’t have to “lunch shame” children for parents getting behind on accounts.  Districts didn’t have to rely on philanthropists and their own teachers to pay off student lunch debts, which for some districts were substantial.  Parents saved lunch money—not to mention the fees paid to third party account providers—during a time of economic disruption and now rising inflation.

Conservatives in Congress, though, have again put a stop to the progressive aspects of school food that succeeded during the pandemic.  In recent negotiations over the Keep Kids Fed Act to renew the waivers, Senator Rand Paul (R-Kentucky) alone insisted that the reduced-price meal category be restored, rather than simply letting that relatively small band of students get free meals rather than pay 40 cents.  Certainly Paul has been a “deficit hawk” his entire career, but the $122 million the reduced-price payments would recoup, nationally, each school year is a tiny drop in a more than $14 billion budget for the NSLP.  One suspects that the traditional ideologies of conservatives, outlined extensively in my book Unpacking School Lunch: Understanding the Hidden Politics of School Food, are once again at play.  Rather than see universally free school meals as a broad public good, like other free aspects of public schooling, conservatives still view school meal programs through the lens of welfare, with all its attendant religious, moral, economistic, and racial baggage.

Most schoolchildren are not lazy, and they won’t become so because they get nutritious meals at school for free.  Disciplining parents is not a good use for school meals, either.  The founders of the National School Lunch Program, while not all their intentions were admirable, understood that school meals helped preserve the republic.  It was proved again in the dire circumstances of the pandemic.  I hope that policymakers will heed these lessons, but it seems some are intent on ignoring both innovation and history in favor of moralistic ideology.