In Search of the Ladies-in-Waiting to Anne Boleyn 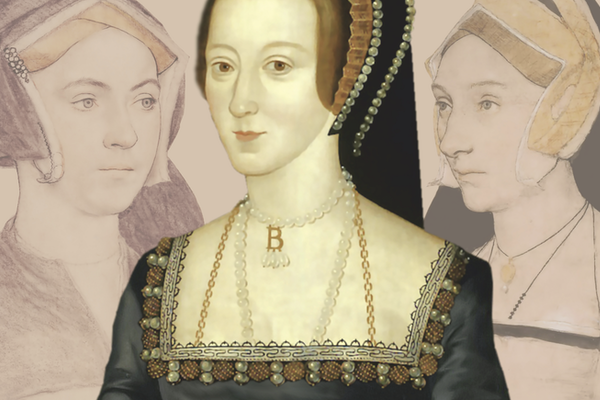 Much emphasis is usually put on Anne Boleyn’s relationships with the men in her life: her suitors, her royal husband, her father and brother and her putative lovers who were executed on May 17, 1536. No comprehensive analysis of her ladies-in-waiting has ever been attempted until now. Some women from Anne’s household, like the infamous Lady Rochford, still often blamed for Anne’s downfall, are well-known to both academic and general audiences, but the facts of their lives are often imprecise or misinterpreted.

At the center of this study is the list of women from Anne Boleyn’s household who attended her coronation in 1533. BL MS 6113 is a manuscript well-known to scholars. It contains information on the christenings, coronations and creations of royal and noble personages from the reign of Henry V to Elizabeth I. Part of this manuscript relates to Anne Boleyn’s coronation and is often cited. However, the part of the manuscript with the whole list of ladies-in-waiting and maids of honor who took part in the coronation procession is almost never discussed in the Boleyn scholarship. Julia Fox discussed the list briefly in her 2009 biography of Jane Boleyn, but identified the women wrongly. Dr Nicola Clark included a brief discussion of the Howard women featured on the list in her book Gender, Family, and Politics: The Howard Women, 1485-1558.

Why is this list so important? It gives us the names of Anne Boleyn’s most intimate servants. Other sources from this period, such as letters, chronicles, memoirs and household expenses, often mention the women who figure on this list.

The facts of Anne Boleyn’s life and death are well-known, but the women who witnessed her spectacular rise and dramatic fall are often reduced to footnotes in history, faceless silhouettes observing these events from the sidelines. It was my goal to identify the women who served in Anne Boleyn’s household and learn what roles they played in the story of Anne’s life.

Anne famously refused to become Henry VIII’s mistress, and so the King decided to divorce his wife of twenty years, Catherine of Aragon, to marry Anne. Between 1527, the beginning of Henry VIII’s Great Matter, as his annulment was known, and 1533, when Anne was crowned, Anne’s position at court was anomalous. She was neither the King’s mistress nor his wife, and yet she was treated as if she were already Queen.

The first mention of her female servants comes from the French ambassador who, in June 1528, reported that one of Anne’s ladies fell sick with the dreaded sweating sickness. Already at that point, although she was merely Mistress Boleyn, Anne had women who served her. One of the women who served Anne before she became Queen was Anne Gainsford. It was Mistress Gainsford who shared Anne Boleyn’s interest in William Tyndale’s The Obedience of a Christian Man and borrowed this book from her. It is part of the story of Anne’s life that Anne Gainsford was an informant of George Wyatt, Anne’s first biographer, yet this is a myth. Wyatt wrote his biography of Anne Boleyn c. 1606; Anne Gainsford died before Wyatt was even born, so she could not have been his informant.

On 12 April 1533, when she attended mass as Queen for the first time, Anne Boleyn was attended by sixty maids of honour. Her cousin Mary Howard, soon to be married to the King’s illegitimate son Henry FitzRoy, bore the train of her gown. Mary accompanied Anne in her triumphs: she attended her when Anne received the marquisate of Pembroke in September 1532, was present during her coronation in May-June 1533 and played a prominent role during the christening of Anne’s only daughter, Princess Elizabeth, in September 1533. Mary was to be remembered by martyrologist John Foxe as “one of the chief and principal of her (Anne’s) waiting maids”.

Anne’s rise to queenship set a dangerous precedent, and she was aware that the women who served her were her potential rivals for the King’s affection. She decided to make her household a place untouched by scandals, so she laid out William Tyndale’s translation of the New Testament in her Privy Chamber as a reminder for her maids to lead chaste and moral lives. Although Henry VIII chose ladies from Anne’s household as his mistresses during their marriage, one of the Queen’s silkwomen later recalled in a conversation with John Foxe that “she never saw better order among the ladies and gentlewomen of the court than was in this good queen’s days.”

Sometimes the very identities of Anne Boleyn’s ladies-in-waiting are confused in the public mind. “Madge Shelton” often appears in the narrative of Anne’s story, and yet no “Madge” Shelton ever served Anne. There was only one woman in Anne Boleyn’s household records who was referred to as “Mrs Shelton” and it was Mary, not her sister Margaret. It is “Mary Shelton” whose signature is still extant within the pages of the Devonshire Manuscript, an anthology of courtly poems to which three of Anne’s maids of honour contributed, and who was identified as the Queen’s maid of honour by Anne Boleyn’s chaplain, William Latymer. In December 1537, Henry VIII’s ambassador remarked that the Duchess Christina of Milan resembled “one Mrs Sheltun that used to wait on [serve] queen Anne”. This comment highlights that there was only one “Mrs Shelton” in Anne Boleyn’s household. Documents of the period identify her as Mary Shelton.

Some women of Anne’s household, like Jane Boleyn, who supposedly gave evidence that contributed to Anne’s downfall, received more scholarly attention than others. Julia Fox’s biography of Lady Rochford came out in 2009 and challenged the traditional narrative of Jane as the “wicked wife” who betrayed her own husband and sister-in-law. Yet no matter how many pairs of eyes analyze Jane’s story, myths still sneak into the narrative and assume a life of their own. One such myth, still persistent in the Boleyn scholarship, is that Jane Boleyn took part in a demonstration in favor of Lady Mary, Henry  VIII’s elder daughter, when the court was on its annual summer progress in 1535. The evidence of her involvement rests solely on a marginal note of the French ambassador who reported this incident, writing “Millor de Rochesfort et millord de Guillaume” (“My Lord of Rochford and my lord William”). Yet this note clearly names men, not women. Paul Friedmann, Anne Boleyn’s nineteenth-century biographer, misinterpreted this note, assuming it meant that the women who were imprisoned in the Tower of London for demonstrating in Lady Mary’s favour were the Lady Rochford and William Howard’s wife. Yet William Howard’s wife, Katherine Broughton, died in April 1535, so she could not have been present at the demonstration. Julia Fox doubted that Lady Rochford would have been as naïve as to demonstrate in Mary’s favour since this would mean she betrayed the trust of her husband’s family. The majority of Boleyn scholars believe in Jane’s alleged presence at the demonstration and often take it as evidence of Jane adopting a position of hostility towards Anne Boleyn or even of a rift between Jane and George Boleyn, her husband. This is yet another myth that has to be put to rest.

The myth of Jane Boleyn providing false evidence against George and Anne Boleyn is so strongly entrenched in the narrative of Anne’s fall that the woman who was named as Anne’s “first accuser” is often forgotten. An observer at court reported that Elizabeth Somerset, Countess of Worcester, was the Queen’s “first accuser”.

One of the most interesting aspects of Anne’s last days is the question of the identity of the four women who accompanied her to the scaffold on 19 May 1536. Eyewitnesses described them as young, and yet the women who accompanied Anne in the Tower of London were by no means young. Is it possible that in his last act of mercy, Henry VIII allowed Anne to have her most trusted women with her in her last hours? A book of hours belonging to Anne Boleyn and currently preserved in the British Library contains the names of Elizabeth and Henry Reppes. Elizabeth Reppes served as Anne Boleyn’s maid of honour when she was known as Bessie Holland. Mistress Holland accompanied Anne to her coronation in 1533 and was placed in Anne’s household because she was mistress of the Queen’s uncle, Thomas Howard, Duke of Norfolk. Why does Bessie Holland’s married name appear in the book of hours that belonged to Anne Boleyn? This overlooked connection between the Queen and her maid raises the possibility that Bessie Holland accompanied Anne to the scaffold and perhaps received this book as a gift.

These and many other aspects of Anne Boleyn’s female household are discussed in Ladies-in-Waiting: Women Who Served Anne Boleyn.