Is There a Biblical Solution to the Modern Problem of Debt?

Eva von Dassow is Associate professor of Ancient History at the University of Minnesota. 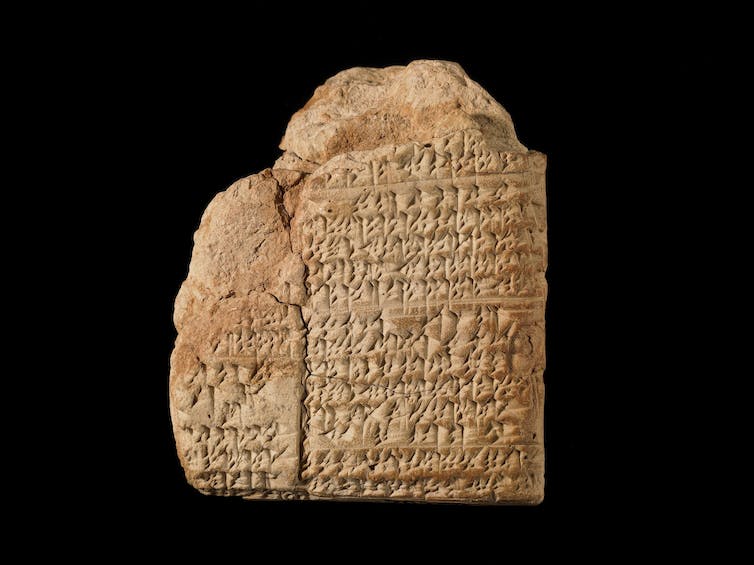 Part of a restoration edict of Ammisaduqa, one of the rulers of ancient Babylon. © The Trustees of the British Museum, CC BY-NC-SA

Student loan debt is one of the most burdensome forms of debt in America today. According to oft-cited statistics, approximately 43 million Americans have student loan debt, cumulatively amounting to around US$1.7 trillion. The exorbitant costs of higher education in the United States, combined with the fact that educational credentials serve as a ticket to decent employment, require many students to take out loans that follow them long past graduation – and that are almost impossible to discharge in bankruptcy.

Hence, calls for cancellation of student loan debt by legislative or executive action keep intensifying, and President Joe Biden is expected to respond by ordering cancellation of some amount, notwithstanding arguments against any blanket debt amnesty.

Yet this very policy is inscribed on the U.S. Liberty Bell. “Proclaim liberty throughout all the land unto all the inhabitants thereof!” it declares, quoting the biblical Book of Leviticus, 25:10. The Hebrew word translated “liberty,” “derōr,” actually refers to debt amnesty. 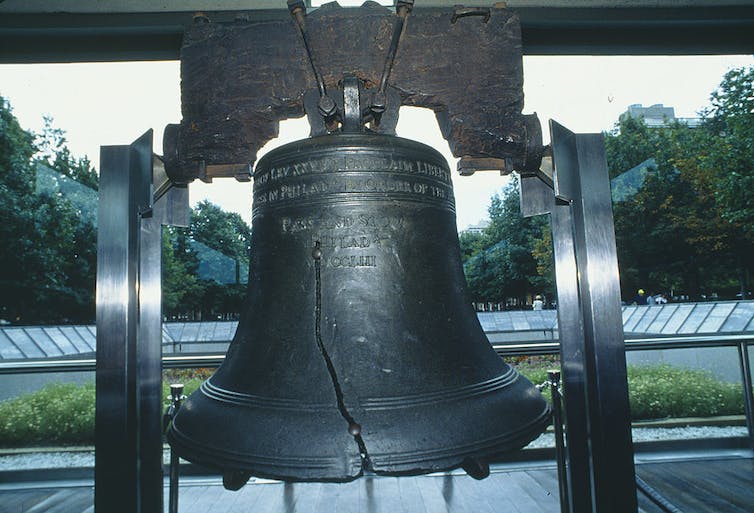 The Liberty Bell, with its famous crack, in Philadelphia. Joe Sohm/Visions of America/Universal Images Group via Getty Images

In the world of the Bible, it was customary to cancel all noncommercial debts from time to time. As a scholar of the ancient Near East, I’ve read many cuneiform tablets that record how people then – like Americans today – often went into debt to meet living expenses. They might mortgage their property to keep a roof over their heads, only to find that ever-accruing interest made it impossible to pay off the principal.

They faced the additional risk of debt bondage: People lacking sufficient property to secure their debts would have to pledge their dependents or even their own selves to their creditors. Their creditors thus became their masters, and those pledged for debt were effectively enslaved, unless and until they were redeemed. A decree of debt amnesty would wipe the slate clean, springing people from bondage and restoring their freedom as well as their fortunes.

The earliest recorded instances of this practice come from ancient Sumer, a land in the south of what is now Iraq. Urukagina, ruler of the city of Lagash around 2400 B.C., decreed a debt amnesty soon after he came to power, releasing people living in debt bondage to go home and even clearing the prisons. In the Sumerian language, this amnesty was termed “amargi” – “return to mother” – for it restored people to their families.

Urukagina was not the first to issue such a decree, and it may already have become traditional by his time. The practice of decreeing debt amnesty is widely documented in the Semitic-speaking kingdoms of Syria and Mesopotamia during the early second millennium B.C. Debt amnesty was routinely triggered by the death of a ruler: His successor would raise a golden torch and decree “andurāru,” or “restoration” – the Akkadian equivalent of Hebrew “deror.” The stated purpose of such decrees was to establish or reestablish equity. A king’s foremost duty was to maintain “justice and equity,” as Hammurabi of Babylon claimed to do when promulgating his laws around 1750 B.C.

While lending at interest was not considered unjust, debt that deprived families of their property and liberty created inequity, which had to be remedied. A decree of “andurāru” restored equity, liberty and family property by canceling debts incurred for subsistence – including tax arrears owed to the state – while leaving commercial debts untouched. When Hammurabi was on his deathbed, his son Samsu-iluna took power and issued a decree remitting noncommercial debts, canceling arrears and forbidding their collection; thus, he declared, “I have established restoration throughout the land.”

A decree of restoration could also be issued to address political or economic crisis. The usurper or conqueror, having subjected a people to his rule, could establish their “restoration,” both remitting debts and enabling those captured during hostilities to go free. Hammurabi himself did this upon conquering the kingdom of Larsa, which was part of ancient Sumer. 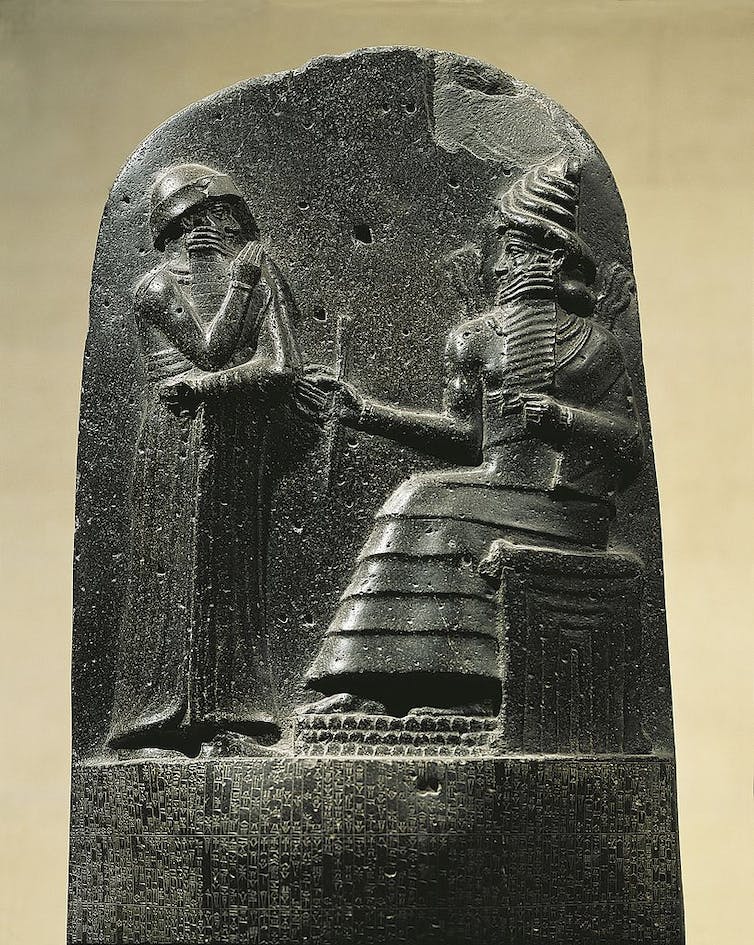 Detail of a relief of King Hammurabi before the sun-god Shamash, from a stone stele inscribed with his proclamation of laws and dedicated around 1750 B.C., discovered at Susa in present-day Iran. DEA / G. Dagli Orti/DeAgostini via Getty Images

Thus the conqueror could pose as a liberator setting a disordered realm to rights. The idea was to restore the inhabitants of the land to their original condition, before incurring debt, losing their property or losing their liberty.

The issuance of debt-canceling decrees was sporadic, not periodic, so one never knew when it would occur. But everyone knew it would happen sooner or later. Financiers would therefore prepare for this eventuality to avoid taking losses whenever debts were abruptly remitted and their collection prohibited. They used various methods to insulate transactions and investments from debt remission – because otherwise who would ever offer credit to those in need?

They developed legal fictions to disguise mortgage loans, debt bondage, and the like as contracts of other kinds, avoiding their cancellation by decree. The decree of Ammi-ṣaduqa, a king of Babylon in the 17th century B.C., explicitly prohibits such subterfuge, but regulation was a step behind entrepreneurs. Clever financial instruments immunized debt from amnesty and kept credit, as well as profit, flowing.

Ultimately a program for periodic debt cancellation was developed in biblical law. The Book of Deuteronomy requires remission of debts among Israelites every seventh year, using the term “šemiṭṭah” – “remission” – and stipulating that every creditor should remit the debt owed him. The Book of Leviticus adds the requirement to proclaim amnesty, Hebrew “deror,” after every seventh cycle of seven years, restoring every Israelite to his property and family in the 50th year – the jubilee year. Recognizing that a predictable debt amnesty would only make creditors’ planning easier, Deuteronomy 15:9 warns against refusing to lend as the seventh year approaches.

The biblical authors must have had some experience with creditors’ efforts to evade the requirement to remit debts. According to the Book of Jeremiah, when Zedekiah, the last king of Judah, decreed “deror” in the face of the Babylonian invasion of 587 B.C., creditors agreed to release their enslaved fellow Judeans, then found ways to force them back into bondage.

Not only was the ostensible purpose of debt-remission decrees defeated by creative credit instruments, the true purpose of such decrees was not to fix the problems that made them necessary. People would still need to go into debt to survive, pay their taxes and keep a roof over their heads. They would still risk impoverishment, debt bondage and eventual enslavement. Sporadic debt cancellation did not eliminate chronic indebtedness, nor was it meant to.

Instead, the function of such decrees was to restore socioeconomic balance – and the tax base – enough that the cycle of borrowing to survive could start over. In a sense, debt amnesty actually served to restore society to its ideal state of inequity, so that it would always need the same remedy again.

This dynamic is worth considering amid calls for canceling student loan debt. Certainly a student debt amnesty would benefit millions whose lives are shackled by interest on loans they took out in the hope that a degree would guarantee them gainful employment. It would do nothing to address the problems that make incurring such debt necessary.

As long as higher education is treated simultaneously as a private good and a job requirement, people will still need to go into debt to get degrees. Then the same remedy will have to be applied again.