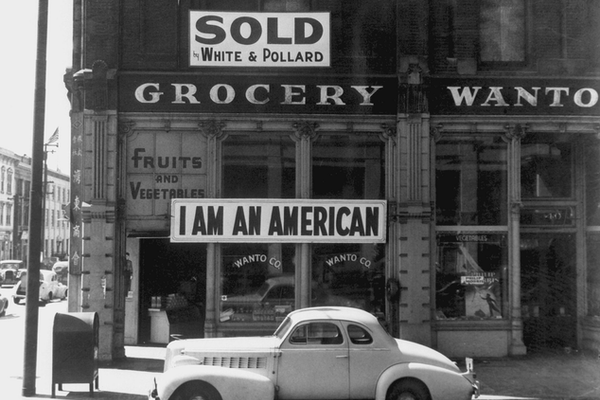 Photo Dorothea Lange, March 1942. Despite proclaiming his loyalty, the Japanese-American owner of this store in Oakland was interned by the US government.

The focus of Critical Race Theory has been on the treatment of people of African ancestry as the United States has been pressed to come to terms with its racist past and lingering racism today. It also should include the long history of anti-Asian violence and discrimination in this country. Asian American and Pacific Islander Heritage Month in May is a time for teachers and students to highlight the contributions and influence of Asian Americans and Pacific Islander Americans on the history, culture, and achievements of the United States.

Ex-President Donald Trump exacerbated anti-Asian hostility in this country with specious statements blaming China for the COVID-19 pandemic and the calling it the  “Chinese virus” and “Kung Flu”. The Republican Party has tried to divide potential Democratic voters by arguing that affirmative action programs and school reforms addressing past discrimination against African Americans and Latinos are in effect anti-Asian.

Recent deadly attacks on Asian Americans, in San Francisco and New York City, and the mass shooting in Atlanta where six women were murdered, have been committed by very disturbed people who were agitated by a climate that allows anti-Asian stereotypes to go largely unchallenged. An article in the journal Education Week calls on schools to play a larger role in combatting the stereotypes and anti-Asian racism by making Asian immigrants and their experience more prominent in the United States history curriculum. This would be an important corrective.

On the 2020 federal census, people who identified as Asian or of Asian ancestry made up approximately 6% of the U.S. population, or almost 20 million people. The Asian American population grew by 35.5% between 2010 and 2020. Another 4 million Americans identified as mixed ancestry with a partial Asian heritage. The three largest groups were Chinese (about 5.4 million people), South Asians from India (4.6 million), and Filipinos (4.2 million). Chinese are the second largest immigrant group in the country. In 2019, California had the largest Asian American population, about of 6.7 million people followed by New York (1.9 million), Texas (1.6 million), and New Jersey (958,000).

The first large influx of people from Asia into territories that would become the United States occurred during the California gold rush starting in 1849. Chinese contract workers were brought to the United States to take low paying, dangerous jobs in mining and railroad construction. Most were male and planned to return home after earning enough money buy land and start a family. In 1850, the Chinese population of the United States was only 3,227 people. It increased to 35,000 in 1860, a little over 60,000 in 1870, and just over 100,000 in 1880 when anti-Asian laws blocked new Chinese arrivals. In1857, Harper’s Weekly reported, “The immigration of Chinese into California has attracted the attention of Congress. It appears that the Chinese immigrants, on settling there, persist in maintaining their allegiance to China; and under these circumstances the Senate voted a resolution, December 19, making inquiry into the propriety of discouraging such emigration.”

From the 1850s through the 1870s the California state government systematically discriminated against Chinese. Among other actions, it required special licenses for Chinese-owned businesses and Chinese were not permitted to testify in court against a white person. In 1875, Congress passed and President Grant signed the Page Act, the first federal immigration law. It prohibited immigrants considered “undesirable,” including any individual from Asia who was coming to America to be a contract laborer, any Asian woman who would engage in prostitution, and all people considered to be convicts in their own country. In 1882, Congress passed the Chinese Exclusion Act suspending the immigration of Chinese laborers for a period of 10 years. It was the first law in American history to place broad restrictions on immigration and the first law to ban a specific ethnic group. The law remained in effect until 1943.

In Hawaii, Japanese immigrants labored on sugar and pineapple plantations where they were subject to harsh rules and exploitation by armed European American overseers. On the plantation, Japanese workers had 3- to 5-year binding contracts and were jailed if they tried to leave. Those who eventually migrated to the mainland were subject to discriminatory laws and practices. California passed a law in 1913 banning Japanese from purchasing land.

Under the notorious Gentlemen's Agreement of 1907 between United States and Japan, Japanese officials stopped issuing passports for new laborers. Federal legislation in 1924 completely banned any immigration from Japan.

The situation worsened with Japan’s attack on Pearl Harbor in 1941 and U.S. involvement in World War II. Dr. Seuss posted racist caricatures of Japanese and Japanese Americans as part of wartime propaganda, and Executive Order 9066 eliminated all civil rights for Japanese immigrants and their families living on the West Coast. An estimated 120,000 people were branded as security risks and forced to abandon homes and businesses and relocate to concentration camps, mostly in inhospitable areas of the Rocky Mountains. This action was taken despite the fact that there was not a single case of espionage ever established against Japanese Americans and immigrants living in the United States, and over two-thirds of those forced into concentration camps were American-born citizens. The fenced in camps were located in harsh terrain and patrolled by armed guards. Ironically, Japanese Americans in Hawaii were not imprisoned because they were needed to rebuild areas destroyed by the attacks. Young Japanese American men were permitted to leave the concentration camps if they enlisted in the U.S. military. Japanese American soldiers served in a segregated unit, the 442nd, stationed in Italy and France. It was the most decorated American combat unit during World War II.

In 1944, in Korematsu vs. United States, the Supreme Court ruled by 6-3 that the detention of Japanese Americans was a “military necessity” and not based on race. In a dissent, Justice Robert Jackson called the exclusion order “the legalization of racism” and a violation of the 14th amendment. Fred Korematsu, who challenged the evacuation order and forced internment, was “convicted of an act not commonly thought a crime. It consists merely of being present in the state whereof he is a citizen, near the place where he was born, and where all his life he has lived." In 1983, a federal judge overturned Korematsu’s conviction and in 1988, President Reagan signed the Civil Liberties Act compensating more than 100,000 people of Japanese descent who were incarcerated in the World War II concentration camps.

Since 1965, the United States has large immigrant populations from Korea, the Philippines, Southeast Asia, Bangladesh, India, and Pakistan. Each group has its own history in the United States, however all have faced stereotypes and discrimination and been stereotyped. South Asian Americans, often identified as Moslems even when they are not, were targeted after the 9/11/2001 attack on the World Trade Center in New York. A case involving an immigrant from India in the 1920s, United States v. Bhagat Singh Thind, established that people from the Indian sub-continent could not become naturalized citizens of the United States because they were not a “white person” in the sense intended in the Naturalization Act of 1790.

One of the most important constitutional decisions about citizenship was a Supreme Court ruling in the case of the United States vs. Wong Kim Ark was a Chinese American born in San Francisco, California in 1873. His parents were Chinese immigrants who returned to China about 1890. In 1894, Wong Kim Ark traveled to China to visit them and was not allowed to reenter to the United States because officials at the arrival center claimed he was not a citizen. In 1898, the Supreme Court in a 6-2 decision ruled that he was a citizen of the United States because he was born in this country.

Facing History and Ourselves https://facingtoday.facinghistory.org/11-resources-for-teaching-about-aapi-experiences