Democracy's Enemies are Abroad, but Also at Home

Jim Sleeper is the author of "Liberal Racism" (1997) and "The Closest of Strangers: Liberalism and the Politics of Race in New York" (1990). 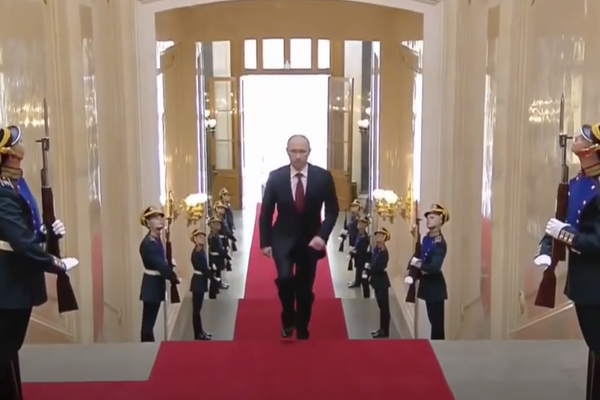 As Vladimir Putin wrested Crimea from Ukraine in 2014, I wrote here on HNN and in The Washington Monthly that although peace-loving liberal democrats must arm themselves and fight sometimes, the Crimea seizure was not such a time and that more serious threats to liberal democracy were coming from much closer to home. The 2008 financial meltdown and the accelerating pace of public massacres in American public and private spaces were only two instances of the implosion of a civic-republican culture without which a liberal democracy lies open to demagoguery, thuggery, and grand theft.

Some Americans live only to fight threats from abroad, distant from our internal crises; they beat drums for war against external enemies: armchair warriors such as Leon Wieseltier and Robert Kagan line up with Kagan’s brother Frederick, a professor at West Point, and with other would-be combatants --“Second Amendment People” or uniformed militarists craving what they envision as a clear, decisive defeat of democracy’s enemies.

In 2014, I dismissed that view out of hand. I doubted even deeply researched, sober warnings from the historian Timothy Snyder that Putin’s Russia is a fascist dictatorship intent on shutting down a lot more than the independence of Ukraine and other former Soviet “republics.”

But while the drumbeaters have been relentless, and sometimes a bit over the top, there are times to acknowledge that, just as a stopped clock is right twice a day, neo-conservative publicists and historians fixated on Eastern Europe’s Bloodlands, as one of Synder’s books calls them, are right at certain moments.

So, what time is it right now? And whose clock is telling it reliably?

Barely a year before 9/11, Robert Kagan’s father Donald, a Yale historian of ancient empires and wars, and Robert’s younger brother Frederick, the West Point professor, published While America Sleeps: Self-Delusion, Military Weakness, and the Threat to Peace Today, warning that "the collapse of an international system… will bring attacks on the American homeland" and that "the United States must begin to gird itself for the next round of conflict."

Typical of neoconservative drumbeating though this was – critics dismissed it as just another neoconservative reenactment of Winston Churchill’s wise but ignored warning against appeasing Hitler in 1938 at Munich-- 9/11 reinforced the Kagans’ dark summons. Two of the Kagans and Wieseltier and dozens of other would-be warriors signed a public letter to President Bush from the neoconservative Project for the New American Century, urging that "even if evidence does not link Iraq directly to the attack… the eradication of terrorism… must include a determined effort to remove Saddam Hussein." They even championed our 20-year occupation of Afghanistan as a good and necessary fight.

History has discredited such responses, which were sometimes as gratuitously destructive, corrupt, and ineffective as Russian incursions in Afghanistan and Syria and now in Ukraine. Yet like Pearl Harbor, 9/11 did vindicate the drumbeaters’ conviction that there are times when humanists must join with power-wielders and even with war profiteers to crush enemies who are willing to die for their convictions and rage. Are we willing to die for anything worth defending against them? At certain times, it’s a compelling challenge.

But, even now, it's the wrong question if willingness to die and kill overwhelms sounder strategic judgments. Our punitive, supposedly corrective wars in Iraq and Afghanistan, like Russia’s in the latter, ended up posing a different challenge, one that the Vietnam War had shown us: “How do you ask a man to be the last man to die for a mistake?” Vietnam combat veteran John Kerry asked the U.S. Senate in 1971, as the war still raged.

Proud though I am of my father’s service in World War II, when even stopped clocks were right about the fascist threat, I became a Conscientious Objector during the Vietnam War and would have gone to prison or Canada had the first option been denied. That war, like those in Iraq and Afghanistan, needn't and shouldn't have been fought.

Is Ukraine different? Would risking a war between Russia and the West unleash a Gotterdammerung even more devastating than the Great War of 1914 and the Second World War, which ended partly because Americans alone possessed and used a nuclear weapon?

In 2014, I considered that the historian Snyder might be more right than wrong to insist that Ukraine was pivotal to the West’s prospects. It's clearer now than it was then that Putin is indeed determined to do more than restore Russia’s sphere of influence. His invasion of Ukraine is even worse than our grabbing Texas from Mexico in 1846 or Puerto Rico from the Spanish Empire in 1898. The philosopher Jason Stanley argues that Russia's intentions are genocidal, in that they truly mean to erase Ukrainian peoplehood, culture, and language. Putin and Xi mean to replace the whole post-World War II order.

But here comes the hard part for Americans, who have been the progenitors and managers of that postwar order. Our neoliberal, global capitalist order is now a wrecking ball whose casino-like financing and degrading consumerism are fomenting climate crisis, deepening inequalities, forced migrations, cultural implosions, and rampant fraud and violence. Absent a pretty dramatic reconfiguration, our "order" is no longer legitimate or sustainable on terms that any of us can continue to live in.

One certainly needn’t idealize Ukraine (as I warned against doing here at HNN during the first week of Putin's invasion) to recognize that this is one of those times when the stopped clocks are right, if only because our own hypocrisies and cruelties have weakened our own immune system against threats from beyond.

The historian Snyder’s most recent argument that Putin's intentions are as intolerable as his brutality is profound but intensively linguistic and somewhat arcane. Perhaps this three-minute video of Putin entering the Kremlin is worth a thousand such words of warning. A society that seeds and suborns the postures and faces of Putin’s guards and elite nomenklatura, packed like sheep on either side of his swagger, is a failing, kleptocratic state running on oil, militarism, imperialism, cybertheft, and pure fascism. It will have to be defeated sooner or later – not only by Ukrainians, because his fascism is viral in killing truth and public trust wherever it enters our rapidly globalizing lives.

I don’t know if the deeply flawed West can defeat this danger through a mix of sanctions and deft military strategies. World War II was ended and “won” only because Americans had the most terrible weapon and used it. This time, it's Putin who’s threatening to use such weaponry. Even if he doesn’t, the West will have to sacrifice a lot for a long time to stop him. It will have to face down – as France has just done, barely, and without effectively correcting its own neoliberal turn -- the fascism that has been metastasizing not only in its own right wing but also in America's Republican Party.

We have a two-front “war” to fight, not only against fascism from abroad but also against domestic drumbeaters and stopped clocks that have given our own sins too much cover and have made our challenges seem only one-sided.

Our predicament bears some analogy to that of 1939, when the Bushes, Lamonts, and other Americans were still doing business with Hitler and Mussolini instead of recognizing that they would have to be stopped. Putin must be defeated, and Xi contained, even though our own centuries-old financial and corporatist world order generated their resentments and resistance, and even if defeating them makes Western plutocrats and their duped mobs fatter and happier. A similarly tragic reality confronted Americans at the onset of World War II, which elevated propagandists for plutocracy like Henry Luce and imperialists like Churchill even as it crushed Hitler and the other Axis powers.

"Humankind cannot bear very much reality," T.S. Eliot observed, and it’s hard indeed for most of us to face these two incompatible truths at once:

"They" are truly evil in humanist, liberal-democratic terms, yet "we" are corrupt and brutal enough to have generated some the evils they embody; and: "We" have no choice now but to stand up against what our own flawed system helped to create, because these enemies would destroy us even more quickly and brutally than we’re already doing by disrupting and dissolving our own civic-cultural and institutional lives.

Staunch, unremitting opposition to Putin's fascism and Xi's totalitarian state capitalism is part of Eliot’s “very much reality” that we'll have to bear, at the sacrifice of our own moral conceits and material comforts.

Financial Times columnist Chris Giles writes that “the quickest and cheapest way to reduce dependence on Russia is simply to use less gas. if ever there was a win-win outcome for the energy trouble of our time, this is it. Lowering the temperature of our buildings in winter, from 20C to 18C across Europe would reduce energy use by between 20 and 25 percent.” Giles calls for emergency appeals plus price incentives that would make it more expensive to connect to gas and electricity grids but would offer double discounts to current users for every unit of energy they conserve compared to last year.

I favor challenging and reconfiguring the very corporate-capitalist system within which such measures could be taken, by nationalizing or otherwise severely constraining American oil companies that now pursue their shareholders’ profits uber alles. At the risk of flirting with “state capitalism” – as the New Deal and the World War II regimen certainly did – we have no choice but to defeat and/or contain what Putin and Xi, his likely overlord, intend for all of us.