From Saigon to Kabul, American Leadership has Doubled Down on Ignorance

Jim Sleeper is a writer on American civic culture and politics, the author of The Closest of Strangers and Liberal Racism, and a member of Dissent’s editorial board. 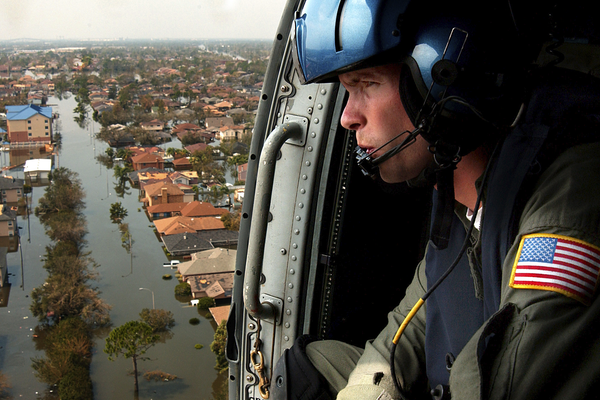 National Guard over New Orleans in the aftermath of Hurricane Katrina

Note: The introductory paragraphs of this essay are originally published here at HNN as an update to an article published in Washington Monthly in 2017, which is excerpted and linked at the bottom of the page.

Many of us who are old enough to have watched the humiliating April, 1975 flight from Saigon of American generals, consuls, contractors, and tens of thousands of Vietnamese who'd trusted them are gripped now by a depressing, disgusting, and, for some, I fear, a gloating sense of deja vu. Some of us warned several years ago that this defeat was inevitable, for reasons I advanced in Dissent magazine in 2009 and again in Washington Monthly in 2017. (See below.)

Vietnam and Afghanistan have very different cultures and political arrangements. The Taliban facilitated an attack on the U.S. in ways the Vietnamese never had. But our own militarist, corporate-contracted, grand-strategic blindness hasn't changed from Saigon to Kabul. If anything, It's been compounded right here at home, as our own government and political economy become ever-less legitimate by any sustainable democratic, civic-republican standard.

Consequently, we have less that's credible or alluring to export or defend abroad. It isn't only the national and provincial governments of Kabul and Kandahar and their rural environs that are collapsing; so is faith in our own national and provincial governments and their premises and promises in New Orleans and Detroit, no matter what the optimistic economic indicia suggest.

For his own cynical reasons, President Trump never had faith in America's "democratic," nation-building mission. Joe Biden knew well enough that Trump wasn't wrong about that. But now Biden has bowed ineptly to that reality.

What have the rest of us learned about how to change it? What can we fairly demand of ourselves and one another? When I wrote the following in 2017, it was becoming clear that neoconservative and Vulcan conservative grand strategies were hypocritical and hopeless. But neither the neoliberal foreign-policy establishment nor the democratic-socialist nor revolutionary left as we've known them have answers.

The Bitter End of Stanley McChrystal’s Afghan War on Poverty

In the 2000s, neocons touted nation-building abroad as they dismantled it in the U.S.

Before President Trump decided to swear off “nation-building” in Afghanistan this week, he must have interrupted his viewings of Fox and Friends and Morning Joe long enough read a 2009 article in Dissent magazine, “Stanley McChrystal’s War on Poverty,” in which I explained why America wouldn’t be able to do for Kabul and Kandahar what it hadn’t been able to do for New Orleans and Detroit.

Although there have been some encouraging initiatives in the latter two cities in the eight years since Dissent posted its warning, that warning bears repeating now that so little has been achieved in Afghanistan. The hard truth is that neither more “boots on the ground” nor more “nation-building” will work there. The larger diplomatic, region-wide strategy that Secretary of State Rex Tillerson sketched may hold some promise, but I can’t assess it here. First, we need to understand what’s gone wrong.

When General McChrystal announced his new counterinsurgency strategy for Afghanistan in 2009, overturning many of the doctrines the U.S. brought to Iraq in 2003 and expanding others developed after 2006, he was reviving a policy mindset that had faltered in Vietnam and even in Lyndon Johnson’s “War on Poverty” in the United States.

McChrystal’s “interim assessment” for the White House and his “counterinsurgency guidance” for the troops in Afghanistan rejected “the conceit that an army can defeat an insurgency simply by killing insurgents,” as the conservative foreign-policy pundit Max Boot put it. Ironically, that had long been the conceit of law-and-order conservatives and “present danger” neocons, but by 2009, many of them, like McChrystal, had sidelined the “more troops” approach, but also the liberal “culture of poverty” that McChrystal believed had hobbled NATO’s disorganized efforts in Afghanistan.

Instead of continuing the policies of the militarist right and the social-welfare left, McChrystal proposed to expand the war in ways that would “embrace the people,” be “a positive force in the community,” and “use local economic initiatives” to displace the insurgency. With massive new resources, this new doctrine would integrate “military, paramilitary, political, economic, psychological, and civic actions taken by a government to defeat insurgency.”

But whose government? Hamid Karzai’s was corrupt as well as feckless. And even the United States Government, ever since Ronald Reagan’s presidency, had hastened a decades-long disintegration of “actions” such as McChrystal was now proposing for Afghanistan. Here at home, the disintegration of such actions had left New Orleans patrolled by Blackwater guards in a perfect storm of unchecked global warming, failed infrastructure, corrupt politics, laissez-faire economics, and social disarray. By 2009, it wasn’t easy to tell what model the NATO coalition could implement more successfully in Afghanistan.