The Integration of College Hoops Came through Many Small Shining Moments

Chad Carlson is the author of Making March Madness and an associate professor of kinesiology at Hope College in Holland, MI. 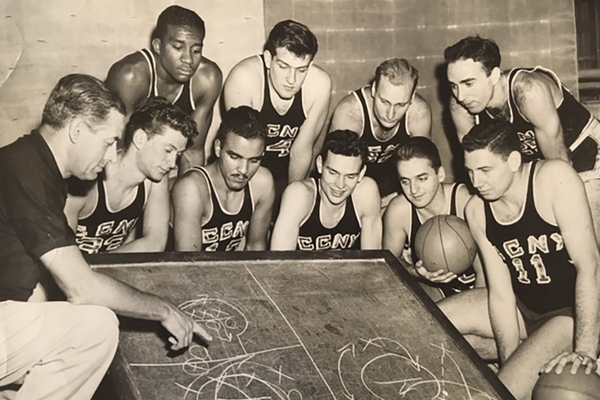 Coach Nat Holman's dominant City College of New York teams of the late 1940s and early 1950s featured lineups of Black and Jewish players from the city and contributed to the gradual integration of college basketball.

A highlight of every college basketball season is the video collage set to Luther Vandross’s performance of “One Shining Moment” at the conclusion of the national championship game, highlighting the most sensational moments of the year’s tournament.

Amid the montage of big shots, buzzer-beaters, celebrations, frustrations, and tears, each “moment” celebrates the memories and emotions we experience during this annual competitive event. While some moments — the Jordan Shot, the Laettner Shot, the Bryce Drew Shot, the Mario Chalmers Shot, the Kris Jenkins Shot, the Tyus Edney Drive, the Webber Timeout, the Jim Valvano Search for a Hug — stick with us in perpetuity, “One Shining Moment” reminds us that the NCAA basketball tournament is full of shining moments that populate in our collective memories.

The March Madness we have watched this season has been a racially integrated event. According to The Institute for Diversity and Ethics in Sport, of all Division I men’s basketball players last season, 52.8 percent were Black or African American, 24 percent were white, and the remaining 23.2 percent included Hispanic/Latino, Asian, Hawaiian/Pacific Islander, American Indian, and Native Alaskan players as well as those of multiple races. This year’s event will have similar statistics, but it hasn’t always been that way.

College basketball had no “Jackie Robinson moment” where a star player of color joined a prominent team, forever integrating an all-white event in front of the nation’s eyes. Instead, the integration of the NCAA men’s basketball tournament spanned a series of shining but subaltern moments that, together, busted racial barriers.

The NCAA tournament began in 1939 as an all-white event. No one noticed. The event itself barely registered in the nation’s sporting consciousness. It was an afterthought to the National Invitation Tournament (NIT) in New York City — a totally separate and racially integrated event at the time.

In 1941, the National Collegiate Basketball Association, a group of coaches from historically black colleges and universities, hosted their own end-of-season national tournament. Louisiana Southern won the crown. The players slept in the Cincinnati gymnasium where they played and struggled to find dining options that would accommodate them. This tournament was never mentioned by the nation’s leading news sources. Runner-up North Carolina Central and its young and soon-to-be-legendary coach John McLendon would play in the famed “Secret Game” three years later.

In 1944, the NCAA tournament hosted its second non-white player, but only by chance, when the University of Utah, after losing in the first round of the NIT, stepped in for Arkansas at the last minute. Traveling with one of their two Japanese-American players, Wat Misaka, the Utes won the entire NCAA tournament—the “Misaka moment.”

Also in 1947, the National Association of Intercollegiate Athletics (NAIA) tournament — one of the nation’s most prestigious post-season college basketball events at the time — actively excluded Black players. Indiana State and its young coach John Wooden attended the tournament without its lone Black player, Clarence Walker. In 1948, amid pressure from the U.S. Olympic Basketball Committee and schools boycotting the event, the NAIA dropped its racially exclusive policy—the “Wooden and Walker moment.”

Loads of college basketball teams began to integrate throughout the 1950s and 1960s, though many found success applying an unwritten rule, especially in the north, limiting the use of Black players. Coaches could play “two at home, three on the road, and four if losing.” Under this norm, the University of San Francisco won back-to-back NCAA titles in 1955 and 1956 — the first two tournaments after the Brown v. Board of Education ruling — with Bill Russell and K.C. Jones—the “future Celtics moments.”

Over the next three years, Tennessee State University and its coach John McLendon won three straight NAIA national championships, coming from the “Black” district. The NAIA divided the country into 32 districts for bids to its 32-team tournament, allotting one of them to HBCUs. The NCAA had denied a similar proposal. There were many “McLendon moments.”

The University of Cincinnati fell short in the 1959 NCAA Final Four with Oscar Robertson, losing to the California Golden Bears, the last NCAA championship team to have an all-white roster despite previously having integrated teams. The Cincinnati Bearcats found redemption, winning titles in 1961 with three Black starters including Paul Hogue, Tom Thacker, and Tony Yates, and four in 1962 with the addition of George Wilson—the “Cincinnati moments.”

Loyola University won the title in March 1963 with four Black starters. Its second-round opponent was an all-white team from Mississippi State that snuck out of town to play, thereby breaking racial segregation laws in Mississippi. Three months later, President Kennedy proposed the most comprehensive Civil Rights Bill to date. Congress began a lengthy debate of it before the 1964 tournament began.

In 1966, Texas Western benched its white players for the entire game and beat all-white Kentucky for the NCAA crown in an immortalized racial showdown—he “Texas Western ‘Glory Road’ moment.”

Over the past two years, the National Association of Basketball Coaches has promoted an “Eracism” initiative to remember college basketball’s history. It can’t be summed up in one moment, but it can be commemorated in “One Shining Moment.”