Einav Rabinovitch-Fox teaches U.S. and women’s history at Case Western Reserve University in Cleveland, OH. She writes on the intersections between fashion, politics, and modernity. Her recent book is Dressed for Freedom: The Fashionable Politics of American Feminism. 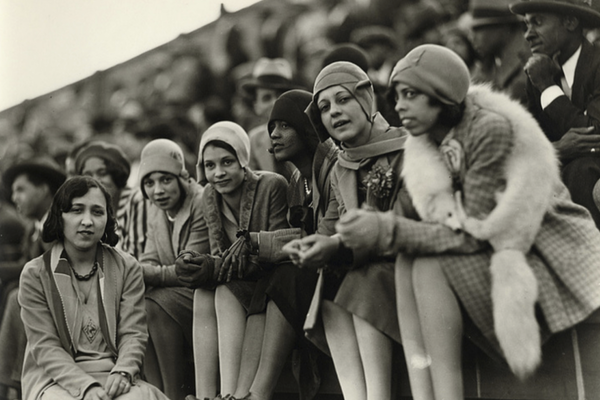 The launching of the “Polo Ralph Lauren Exclusively for Morehouse and Spelman Colleges Collection” has received much attention from the media, which celebrated this unique collaboration between the brand and the two historically Black institutions. The collection derives its inspiration from Spelman and Morehouse’s own historical record, as archival imagery from the 1920s to 1950s inform the styles which are modeled by students, faculty, and alumni.

There is much to welcome about this collaboration. It represents an honest creative dialogue that is often missing in the fashion world, and centers Black talent and Black perspective. It also gives the long overdue acknowledgment to the fashionable legacies of historically Black colleges and universities. Yet more importantly, as Ralph Lauren himself attested, the collection is

“so much more than a portrayal of a collegiate design sensibility. It’s about sharing a more complete and authentic portrait of American style and of the American dream—ensuring stories of Black life and experiences are embedded in the inspiration and aspiration of our brand.”

As one of the most influential designers in the past 50 years to define the “American Dream” through fashion, Lauren is certainly up to the task. Lauren’s design language of polo shirts and sporty jackets helped popularize collegiate “Ivy Styles” as representative of a unique “American Look,” so the decision to expand this interpretation is notable. While the brand has a long history of featuring Black models, it is significant that Lauren acknowledges that “our portrait of the American style and our vision of the American dream, would be incomplete without Black experience like this.” In an industry that is still too white and often ignores Black fashionable heritage, a collaboration like this is indeed a milestone.

Yet, while this collaboration is presented as something new, as part of a racial awakening of the brand after the events following George Floyd’s death, there is a longer history to the development of “Ivy Styles” that makes this collaboration more interesting and at the same time less remarkable. The role that “Ivy Styles” played in shaping ideas about Americanism, and minorities’ use of collegiate fashions to make claims for inclusion in American society, make a brand like Ralph Lauren extremely poised to revisit and expand this fashionable category.

It is also not a coincidence that the current collection is inspired by styles current between the 1920s and 1950s. As historian Deirdre Clemente shows, this was the period when collegiate styles transformed mainstream fashion and created new standards of appearance. Elite Colleges like Princeton and Yale became trendsetters for a unique look, steeped in privilege and whiteness that corresponded to the student demographic that inhabited these universities. Ivy style came to represent a new ideal of Americanism that set the tone for the rest of the country.

However, although the style is associated with the White Anglo-Saxon middle and upper class of the East Coast, it was Jewish tailors, from the same background of Lauren’s immigrant parents, who were responsible for shaping its contours and making it “American.” Like Ralph Lifshitz who became Ralph Lauren, these Jewish tailors translated their European expertise into the formation of an American look. Whether Lauren himself is aware of it or not, his brand is a part of a long dressing tradition of Jewish clothiers defining the WASPy look for the rest of America.

However, if elite schools like Princeton have led the way in shaping styles, they were not alone. Other colleges across the country also participate in shaping the collegiate look. And it was especially true for historically Black colleges and universities. African Americans have long put an emphasis on appearance and used fashion both to refute racist stereotypes and advance claims for racial equality and inclusion in American culture. This was especially true for college students, who were seen as the paragons of middle-class respectability and racial uplift ideology. HBCUs like Spelman and Morehouse viewed students’ fashion choices as more than just individual expression of taste, but as indicator for the entire advancement of the race. These institutions enacted strict dress codes that encouraged modest, simple, yet modern appearance that adapted mainstream styles to cultivate a specific look. The famous traditional Morehouse blazer and the white dresses of Spelman were more than an expression of collegiate pride; they were tools of racial progress.

During the 1920s, 1930s, and 1940s, these efforts did not receive the proper credit they deserve. Whether because of Jim Crow or the discrimination against Jews in higher education, the contribution of minorities to collegiate fashion has remained hidden. When after World War II, colleges and universities began to open their gates to women and minorities, adopting the Ivy Style became a way to fit in, to claim an equal place, and to assert a more visible (and visual) role in shaping collegiate culture. By adopting the language of sports jackets, blazers, and eyelet wrap dresses, students also sought to reclaim the privileges that were associated with them. Ivy styles still represented an aspirational status to many, but this aspiration was more attainable than in previous decades.

As collegiate styles became more casual and democratic, Ivy style lost some of its status as the mark of good taste. Students today are more likely to wear leggings and sweatshirts on campus than blazers and skirts. Yet, as the current collection shows, Ivy styles have not lost their expressive power to create a political statement that is bigger than the individual. The rich history of minorities claiming collegiate styles to advance social justice only highlights how much the “American Dream” was always threaded in the fashion choices of students, regardless of their institution. And that it was Jewish tailors who, in collaboration with these students, turned it into a reality that made it available to all.