Kyiv Has Faced Adversity Before, and Emerged with Stronger Ukrainian Identity 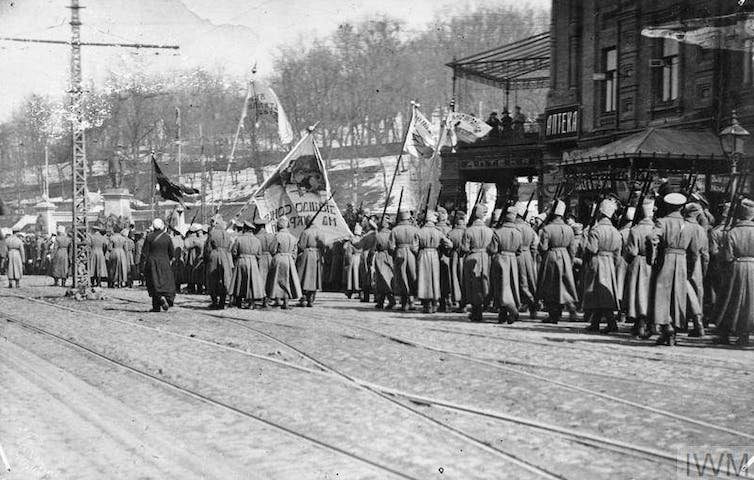 Ukrainian soldiers on the the streets of Kyiv in 1917. Wikimedia Commons

This is not the first time residents of Kyiv have fought to defend the city from an encroaching, larger army.

On Jan. 30, 1918, a force made up primarily of military cadets and hastily armed students took up positions at Kruty, a railway stop northeast of Kyiv, to defend the capital city of the Ukrainian People’s Republic against Soviet Russia. The republic had only declared formal independence a week earlier to rebuff aspirations by Vladimir Lenin’s Bolshevik Party to control Ukraine.

By the end of the day, the young defenders at Kruty had succumbed to Soviet Russia’s superior Red Army. With the help of aligned local Bolshevik militias, the Reds took Kyiv itself on Feb. 7.

The history of Ukraine following the battle for Kyiv is complex and messy. But as a historian of Ukraine, my research has found that this first period of modern independence from 1918 to 1920 is central to a national narrative that maintains Ukraine is a sovereign country, separate from Russia.

This sense of identity makes occupation a hard task, as the Soviets found out in 1918 following Kyiv’s fall.

With the Red Army in possession of Kyiv, the government of the Ukrainian People’s Republic took refuge in the northern city of Zhytomyr. Its representatives signed a peace agreement with the former Russian Empire’s opponents in the ongoing First World War, the Central Powers, and German and Austrian soldiers proceeded to push the Red Army out of Ukraine. 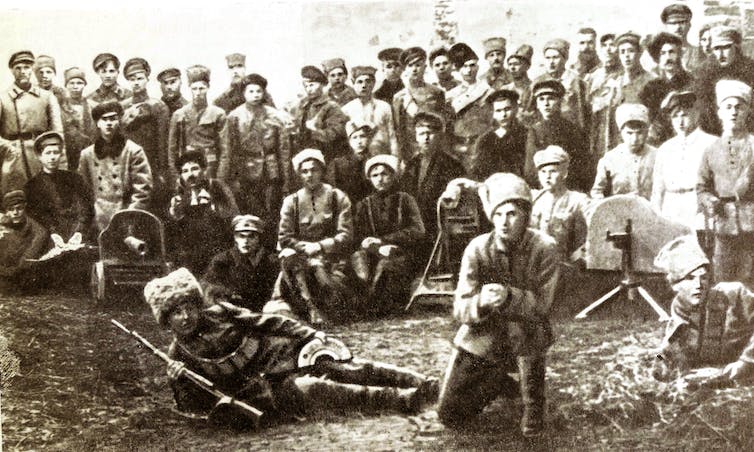 Germany put in place a more pliant government in Kyiv. But after the Kaiser’s army collapsed in defeat on the Western Front, Ukrainian forces under the leadership of a former journalist-turned-soldier, Symon Petliura, retook parts of Ukraine, including Kyiv, only for the city to be occupied again by the Red Army in February 1919.

An army comprising volunteer troops, Cossack units and bands of peasants – some of whom shirked their government’s command and committed pogroms against the country’s Jewish minority – fought for the restoration of dominion over Ukraine. After concluding a hasty alliance with Poland, the Ukrainian People’s Republic briefly recaptured the capital with the help of Polish forces.

But in June 1920, the Red Army subjugated Kyiv for the final and last time.

Ukraine was subsequently divided between Poland and the Ukrainian Soviet Socialist Republic, a Bolshevik-led entity based in Kharkiv. And in December 1922, Soviet Ukraine signed a treaty with Russia and Belarus to form the USSR.

The lessons of the successive battles for Kyiv were not lost on Soviet leaders.

Lenin was forced to concede a need to accommodate what he described as Ukrainian “national feelings” in the development of the USSR. The Ukrainian language was given equal standing in the early years of the Soviet Union, and Communists in Ukraine had greater say in the management of their republic under the nominally federal system than they would have had in a unitary state proposed by Lenin’s detractors.

The Ukrainian national movement compelled these compromises. Ukraine — Soviet or otherwise — was not created by “Bolshevik, communist Russia” as Vladimir Putin claimed in a recent public distortion of history that has served as a justification for invasion.

The economic campaigns of Soviet leader Josef Stalin following Lenin’s demise demanded increased political centralization at the expense of some regional autonomy. In the 1930s, Stalin acted to restrict Ukrainian national culture by curtailing the promotion of the Ukrainian language and repressing Ukrainian intellectuals, initially singling out former Ukrainian People’s Republic adherents for trial. A devastating famine, instigated by a state drive for land collectivization, killed millions in Soviet Ukraine, and the secret police imprisoned many more.

Real power rested in Moscow. But even the Soviets acknowledged a separate Ukrainian identity while cultivating the myth of a fraternal Slavic brotherhood. Putin’s vision goes further in subjugating Ukrainian identity, reviving an imperial era construct of Russians and Ukrainian as “one people.”

If Kyiv passes again to Russian forces, as it did multiple times between 1918 and 1920, history suggests this control will likely not last.

A sense of Ukrainian identity has only grown stronger in the century since young men gathered at Kruty to defend Kyiv.

During Ukraine’s first campaign for independence, Ukrainians increasingly thought in national terms, but not all accepted this construct. And some national minorities mistrusted the Ukrainian government’s promises of a broad range of cultural, educational and administrative rights.

Now, Ukrainians of multiple ethnicities and linguistic preferences have taken up arms to defend a potent, pluralistic and democratic vision of their homeland.

In June 1920, when faced with final entreaties for help, British diplomats told Arnold Margolin, the Ukrainian People’s Republic’s Jewish-Ukrainian emissary to London, that his government had to secure its own independence.

It is a task they face again now. It is unclear when or if Russia will occupy Kyiv. But Ukrainian defense of the city has been fierce. While NATO refuses to send soldiers to intervene in the current war, Ukrainian fighters benefit from foreign military support. And there is every reason to believe that should Kyiv yield, those fighters will continue to wage an insurgency with weapons supplied by their allies.

The national movement in Ukraine in 1918 to 1920 was strong enough to complicate, if not defy, Russian and Bolshevik control. And the Ukrainian national idea did not evaporate under Soviet rule. It is likely to animate a tenacious resistance today.