Dispatches from Ukraine: “The critical question is: “How is everyone, and are you still alive?'”

Ms. Hart is an award-winning journalist who covers international affairs. 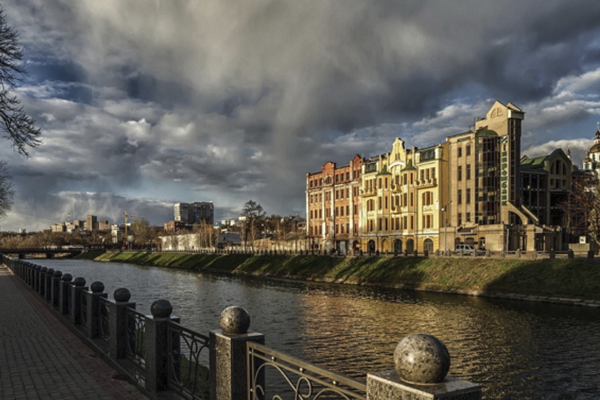 The city of Kharkiv photographed prior to the Russian invasion and shelling.

Their eyes flickered with a mixture of despair, disbelief, and resolve.

Their voices trembled and grew loud at times, stopping mid-sentence when they could not find answers to questions about their future.

The future had become a time too unknowable to fathom, a form without substance, still to be filled.

From their homes they had turned on the news day and night. Obsessively they sifted through it for details to track the distance still separating them from the tanks rumbling down Ukraine’s highways and through its cities and towns.

It was Day 6 of the Russian invasion of Ukraine.

I listened to these three Ukrainian women now living in a state of war-induced terror — the new normal in Ukraine — as they shared their stories, uncertain of being safe in their own homes in a country where just two weeks before they had carried on their lives with a palpable normalcy. Like other Ukrainians, they had watched warily from a distance as the “eastern problem” simmered, created when Russian troops first invaded in 2014. At that time the army took over Crimea and also assisted separatists claiming closer ties to Russia than Ukraine, advancing a plan to secede in the eastern region called Donbas. The unease these women felt never went away -- life was normal enough as long as one looked away from the 8-year-long conflict on the eastern front.

Two weeks ago, Russia invaded again. This time its stated objective was to make surgical strikes on Ukraine’s military facilities and lend its support to what it now called two new separatist “republics” in Donbas. Within days, that military agenda had shifted. Cities were suddenly bombarded and under siege. The critical elements of civilian life – markets, office buildings, schools, hospitals, communications lines, water and energy infrastructure, and houses themselves – were bombed. Across the country mothers and fathers, children and grandparents, normal citizens of all stripes, were wounded and killed or and left without shelter or food.  A mass grave emerged in the city of Mariupol, a large port city on the Sea of Azov, approved by city authorities to bury scores of citizens killed in the besieged city, when morgues were too full.

As they fled, or considered fleeing, Ukrainians began to share their stories with the world, struggling to make sense of the chaos and wondering when it might all come to an end. Among them were three women who shared childhood memories growing up in the outskirts of Kyiv.

Anna, 44, now a mother of two, spoke from her home in the town of Boyarka, ten miles outside Kyiv. Three families were now living in her house, eleven people in all.  All came from Kyiv, where they now feared for their safety. “It’s very dangerous in Kyiv right now,” said Anna, an artist. “This war has come to our homes. We don’t know where [the rockets] will land next.” Her daughter’s 18th birthday had been canceled. Anna’s voice was oddly calm, building up at times to a crescendo of rapid-fire impassioned speech about the true intentions of the war.

“The destruction is colossal,” she added, describing the ongoing besieging of cities and the encirclement by Russian troops of the nearby capital city of Kyiv, recalling the recent bombing of the city’s telephone tower and the death of civilians walking by and waiting in line to enter a grocery store.

“People are leaving en masse, millions of refugees, “ she added.

The Russian troops’ capture of the Chernobyl nuclear power plant, located at the Ukraine-Belarus border with reactors now encased in a sarcophagus following its explosion in 1986 was “blackmail for the whole world.” Then came news from Kharkiv, Ukraine’s second largest city in the northwest, where Freedom Square, the large square in Europe, had been bombed. Many Ukrainians now relied on sedatives to stay calm when incessant shelling and bombing continued for days, she said. “We are frozen from the inside. Personally, I do not cry. I say I will cry later.”

Marina, 49, another resident of Boyarka speaking from her home, peered out from behind her large owl-like glasses and spoke quietly and wistfully of her job as a librarian.  It was, she said, "the most peaceful of professions,” as a faint smile quivered on her lips and then quickly faded. Her daughter’s school had closed. Her daughter and school friends wrote about the war rather than doing their homework assignments. “I have no words,” said Marina. “Their life is being taken away. This is a generation of children of war,” she said, seated in a corner of her home where a small shelf lined with family souvenirs leaned out over her head. Now, every day began with a cycle of phone calls. “We call our relatives. So far, we are still able to call to check on them to find out -- are they alive or not alive?”

Larissa, speaking from an area north of Kyiv, recounted the moment her family fled Kyiv just four days before. Propping her bowed head up with large, soft palms, she said her family made the decision to leave after trying to move their 82-year-old mother to safety in an underground parking shelter located five floors below the building, where there was no elevator.  They fled to a quiet village in the north near the city of Chernihiv, close to the border with Belarus, where Russian tanks were poised to enter Ukraine. “We sleep here,” she said speaking from an undisclosed location, a lace-fringed curtain filled with sunlight behind her. By contrast, in Kyiv, Larissa recalled, “you can go crazy from the sound of the sirens. You are sitting in the apartment, the siren begins, the panic starts, and you run somewhere, but you are not sure where. At least here we are sitting quietly. At least there are no sirens here.”

Still, explosions could be heard at times in Chernihiv. In the village, Larissa’s three-day food supply for her family was dwindling. The grocery shelves had grown bare. When the stocks are gone, Larissa mused, “then there is hunger.”

She spoke now of the arrival of new troops near the village. She summed up their tactical disorganization in granular detail. Some Russian tanks had ground to a halt when “our unarmed people went into the forest and cut down trees and [threw] them on the road.” Other tanks were unable to navigate because their drivers relied on “old maps,” she said, and “many tanks are lost.” The tanks’ connectivity with command centers in Russia was disabled, she believed. Still more tanks were mired in mud with the onset of Ukraine’s season of rasputitsa, when heavy springtime rains create muddy conditions for all drivers. “If they get into the swamp, no one will pull them out. Then the soldiers have to climb out of the tanks and find food. They just walk through the woods. They are hungry. This is a problem in the countryside now.”

And still the tanks rolled in.

Larissa held on to the fleeting hope that her family would be safe because soldiers roamed mainly in search of food, looking for shops. But there were other sinister activities reported: looting and killing. “They stop cars in the villages,” she said, her eyes widening and tearing up. “They shoot people who are sitting in the cars and take away their clothes.” She covered her eyes with her large, soft palms as if to make the images go away. “Horror,” she said, shaking. “Horror. Horror. Death is so near. So people weep.”

For Larissa, Russian President Putin profoundly miscalculated his military strategy with the invasion. “Putin thought that in two days he could bring the country to its knees,” she claimed. “Even in his worst nightmare he could not have imagined how our people would rise up -- all of the people.” Ukrainians even attacked the tanks “with their bare hands.” Blood banks were filling up at record numbers as citizens everywhere donated blood. “There is enough blood for the whole world,“ she said. She spoke sympathetically for mothers of enemy soldiers losing their sons to the war. “Poor mothers. These are children, just children in their 20s.” “If they stay for a night, then our men will make Molotov cocktails and throw them, and that’s it. We will stop them.”

A key to their survival, all three women said, was to keep the lines of communication open among family members, neighbors, and friends, both inside Ukraine and overseas. Even the smallest gestures of support counted. “We are each a drop in the ocean, and your support is a drop in the ocean of truth,” Anna said. “At this distance, this is love. Every morning we are called by relatives, friends, and neighbors. The most important question is, ‘How is everyone, and are you still alive?’”

I heard these astonishing stories not on the ground in Ukraine but when I was invited to join a program online called “Dispatches From Russia’s War In Ukraine.” There I saw Anna, Marina, and Larissa up close by broadcast in a viewing organized by Ukrainian native Ulia Gosart, currently teaching at UCLA.  Gosart was desperate to make contact with friends she knew while growing up near Kyiv. When she finally reached them, she recorded their voices and stories to be sure they reached to a wider audience.

I was struck by how intimately connected I felt with these women who lived in a war-induced state of terror more than 4,000 miles away. They had shared their homes and personal circumstances with me. I found their stories timely and timeless - compelling because they were unique to their own time and place, and also archetypal as they mirrored our universal experience of suffering and the unconquerable reserves of strength to fight back.

The greater issues still remain to resolve of what combination of catalysts gave rise to Russia’s staggering assault and its disturbingly swift descent into barbaric brutality. Whatever the collective judgment on this time in history will be, bombs continue to drop in Ukraine. The great exodus has begun.  But millions more stay behind. Besides brokering a ceasefire, finding terms for peace, undertaking the massive project of reconstruction, and returning to some form of civilian life and governance -- if all this is indeed possible -- the great work lies ahead of bearing witness to this moment of historic tragedy by collecting as many of these stories as we can to give to future generations, to provide lessons on governance, to elicit human empathy, and to bring what measure of peace we can to challenge the storms of violence.

Just days after I listened to the voices of Anna, Marina, and Larissa, they and their families fled. Now, Gosart reports, they are traveling towards the western region of the country. Whether they remain in Ukraine — together with more than one million internally displaced persons — or cross the border to join more than two million Ukrainian refugees, is uncertain. That will be decided in the days ahead.

For now, the future is still too unknowable to fathom, a form without substance, still to be filled.

But their stories have become ours.