Shannon Bontrager is Associate Professor of History at Georgia Highlands College, Councilor, Teaching Division of the American Historical Association and a 2020 Mellon/ACLS Fellow. 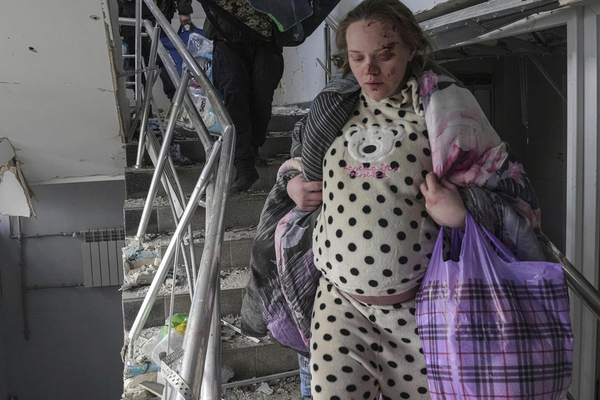 The online image of a pregnant woman moving from a bombed maternity hospital in Mariupol, Ukraine represents a new front in war as the Russian government counters images of attacks on civilians with accusations that the images are staged by crisis actors.

Russian President Vladimir Putin’s unprovoked invasion of Ukraine inadvertently created a new kind of warfare. Russian forces planned to dominate the first front of this war, a front requiring superior numbers, resources, air superiority and supply chains to conquer the physical battlefield. This invasion is not over yet, and let’s be clear that Russian forces could still come to dominate this physical front (even potentially through atrocity). But within the first day of the invasion, Ukrainians opened up a second front, one that Russian forces never planned for and on which they completely outmaneuvered President Putin. This second front is being conducted on digital platforms with scripted and unscripted images, videos, and speeches that are shaping the way we remember the conflict, even as it is being waged.

This digital front has been instrumental and seemingly transformative precisely because Ukrainians have so effectively drawn civilians from around the world into the fray. They have effectively made us all participants in the digital front, actively clicking and retweeting combat, even from thousands of miles away from the physical battlefield. A Ukrainian mother took a selfie of her and her sleeping daughter surviving a night of overhead airstrikes. Observers shared a photo of a baby being born in an underground subway station serving as a bomb shelter. Britons could never accomplish such profound communication during the blitz. The world participates by sharing shocking images of a weeping teacher holding an oversized military rifle as she and her fellow women, dressed in their own clothes, wait to deploy against the Russian military machine. A woman confronts a Russian soldier, telling him to put seeds in his pocket so sunflowers will grow when he is buried. Audiences have embraced the ready-made legend of the “ghost of Kyiv.” Even President Volodymyr Zelensky’s scripted moments in a television studio can be broadcast directly to Russian civilians on platforms that Russian censors will find difficult to combat, simply because the Russian bot network cannot keep up with all of the global digital users reproducing with a click statements like Zelensky’s call to U.S. diplomats for “ammunition, not a ride.”

At no time in history has a single president, or schoolteacher, or a mother, or a newborn baby been able to nearly instantly infiltrate the public consciousness of an invading country, and of the world. In using the digital front, Ukrainians and their far-flung supporters have further blurred the lines between war front and home front. And they have affected politicians in Europe and America, who have expelled Russia from the SWIFT network and imposed other financial sanctions. Likewise, oil companies, financial services providers, Apple and Tik Tok have chosen to cease doing business in Russia. Not only does this digital front affect the morale of soldiers and civilians enduring the brutality of the invasion, it will also affect how societies remember the conflict and especially the fallen. After conflicts end, societies traditionally create monuments to the heroic dead, such as the Tomb of the Unknown Soldier, and create sacred holidays of remembrance, such as Armistice Day and Memorial Day. But in this new digital front, how will we commemorate the sacrifice of a teacher about to deploy or of parents sending the children to safety with a family member only to return to Kyiv and volunteer to fight the Russian army?

Traditionally societies have built monuments to great generals or to soldiers. Abraham Lincoln, for example, dedicated a battlefield to the soldiers who died there so that the world “could never forget what they did here.” When it became too difficult to justify the incredible number of dead soldiers from the First and Second World Wars, French and British societies created an Unknown Warrior and an Inconnu Poilu to stand in for all who sacrificed their lives. After Vietnam, Maya Lin created a monument that actually listed the names of nearly 60,000 soldiers who died in combat. While societies readily democratized their monuments, they continued to focus them around the cult of the fallen soldier. But now that we have seen them, how will we commemorate all of those Ukrainians who made sacrifices? Will Americans, British, or French people dedicate monuments to the fallen Ukrainian in Washington, D.C., London, or Paris?