The Power and Urgency of Public History

David M. Chamberlain has been teaching history for twenty years, first at Kennett High School in northern New Hampshire and for the last decade at Burke Mountain Academy in Vermont.  He recently accepted a position teaching U.S. history at The Lawrenceville School in New Jersey.  He is a James Madison Fellow and his work on environmental history has been published in Appalachia, The History Teacher, and Environmental Practice. 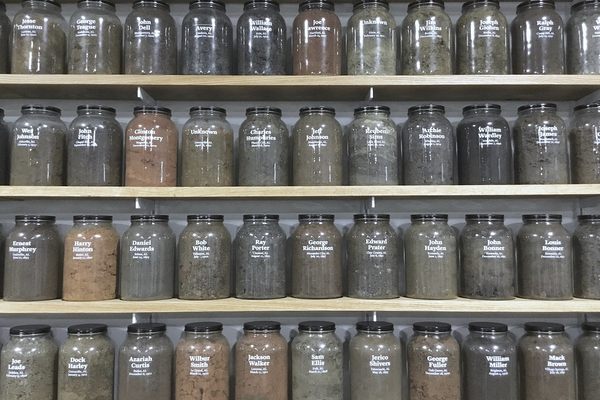 Jars labeled with the names of lynching victims and soil taken from the sites displayed at the Legacy Museum, Montgomery, AL

My wife Rachel and I are two small drops in the mighty wave of Americans who have quit their jobs in the last year, a trend that economists are calling “The Great Resignation.”  Like so many others, nearly two years of being cooped up at home with our social life restricted to a tiny circle of trusted friends had left us clawing at the walls and dreaming of an adventurous getaway. So we quit our teaching jobs in June, vacated our small home on the boarding school campus where we had lived and I had taught history for a decade, and packed up our trusty old Subaru Outback for an extended road trip across America.  We’ve taken to calling our adventure “the Great Horseshoe,” as our route took us west from Vermont across the northern part of the country to Seattle, then south through California, and finally back east via the desert southwest and the deep south before arriving in Tampa, Florida to spend time with family.

We envisioned our adventure as a flight not just from the stresses of teaching amid a pandemic but also as an escape from the thrall of an anxiety-inducing news cycle that has held us in a grip of exhausted despondency since 2016.  For the most part we succeeded.  Gone were the stacks of papers to correct that we piled on our coffee table and the Sunday night fatalism that swelled in both our hearts from knowing that our best efforts in the week ahead would never be enough to reach all our students or satisfy our own expectations.  Camping on America’s public lands had many virtues, chief among them listening to the symphony of birds outside our tent each morning rather than the cacophony of political pundits on the split screen to which we had become accustomed.  Breaking updates on our iPhones were replaced by impromptu map-reading sessions at picnic tables as we considered our hiking options for the day.

Despite our best efforts though, our escapism was not total. A cloud of disquiet hangs heavy over our nation, a mood we sensed while dining with old friends on the plains of eastern Montana and when sitting with new friends around the campfire in the Chiricahua mountains of southern Arizona.  In place after place, we found folks talking in whispery tones about the fractious state of American politics and voicing their apprehensions of coming civil unrest.  And as autumn began to unfurl its yellow banner of leaves across the southwest, I began to feel an increasing tinge of guilt that I had fled my classroom at a moment when the need for historical literacy is more critical than any other point in my lifetime.

As we made our great turn east to make it to Florida by Thanksgiving, our anxieties increased. The radio brought us word of the contentious trials of vigilantes in Wisconsin and Georgia and the ongoing efforts to stonewall the investigation into the January 6th putsch and protect its reckless ringmasters.  Frantic calls and angry texts streamed in from our friends in the teaching profession who are scared and outraged by the well-organized and transparently opportunistic attacks on how the history of race in the United States is taught.  Our planned week-long pilgrimage across Alabama and Mississippi to visit assorted historical sites and the shrines of the Civil Rights movement took on heightened urgency and meaning.

We began our journey across the southland in Vicksburg, Mississippi where the Confederacy was dealt a grievous blow in 1863 and ended at Horseshoe Bend Alabama, the site at which the Creeks were defeated in 1814, ushering in the plantation system to the southeast.  Between these bloody bookends, we walked with tear-streaked faces across the Edmund Pettus Bridge in Selma and lingered in the haunting galleries of the Mississippi Civil Rights Museum in Jackson and the Legacy Museum in Montgomery.  At each site we visited, my wife would invariably express her wish that every student in America could trace our path, and I would respond that I wished that their parents could do so too.  For it is adults, far removed from the transformative grace of the classroom, who are poisoning our political culture and who are most in need of an education.

Perhaps those who so blithely countenance vigilantism in our own times would reconsider their views after they ran their own hands over the scrolls of the names of the victims of lynching memorialized in Jackson, Mississippi.  Maybe the strident chorus of voices who encourage and excuse our contemporary insurrectionists would fall silent once they had toured the Vicksburg battle site and learned of the enormous costs of disunion born by the civilians of that city as they starved, huddling together in caves to escape cannon fire.  If the parents pressuring school boards to muzzle teachers toured the Legacy Museum, could they perchance be persuaded that racism is indeed a central theme of the American story, and that knowing this history is not intended to induce guilt but to enhance our understanding, and thereby set us free to build the beloved community evoked by Martin Luther King.  I maintain a teacher’s optimism that knowledge of our nation’s imperfect past offers us the necessary wisdom to walk ourselves back from the edge of the political ledge on which we are so perilously perched.