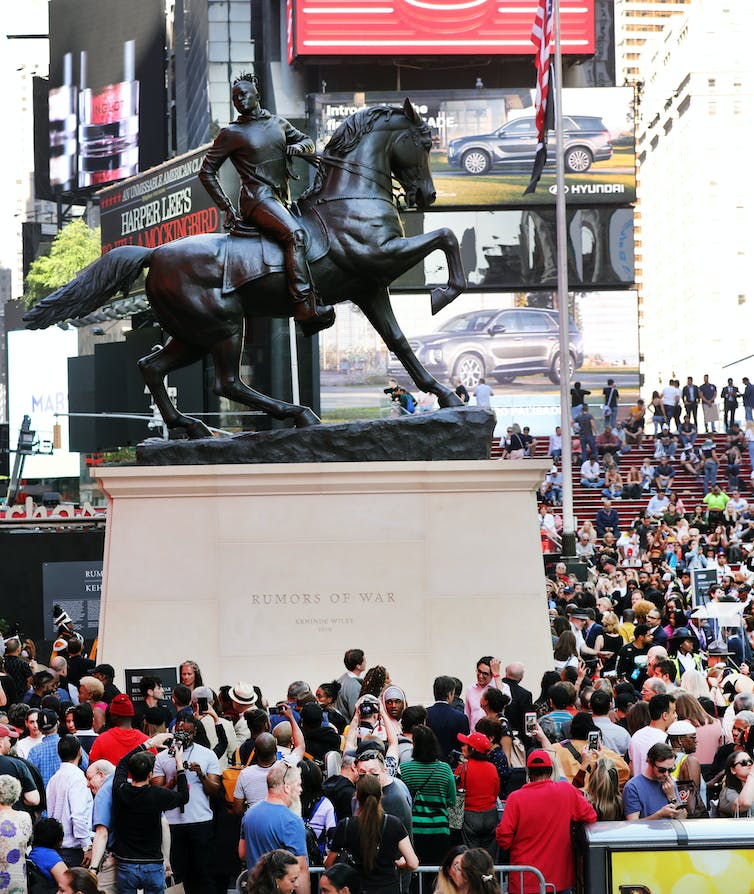 The monument ‘Rumors of War’ depicts a young African American in urban streetwear sitting atop a horse. Spencer Platt/Getty Images

With most of the legal challenges resolved after the violent Unite the Right rally, and the statue of Robert E. Lee removed from its lofty pedestal in downtown Charlottesville, Virginia, local lawmakers in December 2021 voted to do the unimaginable – donate the statue to the local Jefferson School African American Heritage Center.

In turn, the nonprofit cultural group quickly announced its plan to melt down the bronze statue and use it as raw material for a new public artwork. What the group plans to build is still an open question, but it clearly will not be another statue honoring the Lost Cause of the Confederacy, the idea that slavery was a benevolent institution and the Confederate cause was just.

As part of America’s reckoning with its oppressive past, Charlottesville and the rest of the nation face the question of not just which statues and other images should be taken down, but what else – if anything – should be put up in their place.

Statues of Black Americans – and, more importantly, their absence – are an often overlooked barometer of racial progress, hidden in plain sight. Despite their silence, statues are active portraits that can reinforce the value and visibility of Black Americans. The lack of Black statues sends a clear message of exclusion.

For its part, the Jefferson School African American Heritage Center wants to be not only more inclusive in the decision-making involved in determining the future of the Lee statue, but also transformative.

“Our aim is not to destroy an object, it’s to transform it,” Andrea Douglas, the center’s executive director, explained. “It’s to use the very raw material of its original making and create something that is more representative of the alleged democratic values of this community, more inclusive of those voices that in 1920 had no ability to engage in the artistic process at all.” 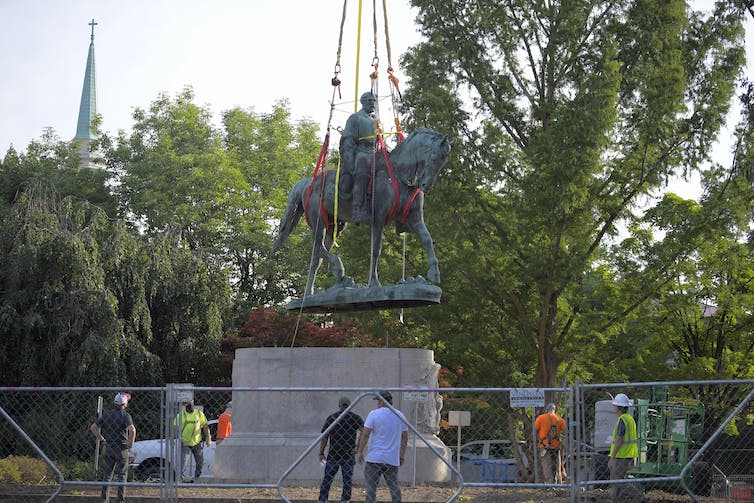 A statue of Confederate general Robert E Lee is lifted off its pedestal in Charlottesville, Va. John McDFor their partonnell/The Washington Post via Getty Images

Most important, she said, the group wants to “turn it into something that can cause our community to heal.”

As a professor of pop culture history who studies Black statues within mainstream society, I believe Charlottesville is not the only city in need of healing. With more questions being asked about today’s relevance of Confederate statues, Americans must also ask critical questions about the role of statues in reflecting present morals and future ideals.

While not uncommon to spot statues of accomplished Black athletes, such as Ray Lewis in Baltimore, Michael Jordan in Chicago or Bill Russell in Boston, it’s much more rare to find Black Americans memorialized outside of the sports and entertainment industries.

With few new exceptions, public and prominent statues of Black people are nonexistent.

The public art and history nonprofit group Monument Lab conducted a survey in 2021 of 48,178 statues, plaques, parks and obelisks across the United States. In its report, the group found that less than 1% were of people of color.

More than likely, that percentage will remain the same for the foreseeable future – even with the recent wave of removing controversial statues in 2020 and 2021.

Since May 2020, the Toppled Monuments Archive has detailed 84 such removals of “colonialist, imperialist, racist and sexist monuments” in North America. In addition, the Southern Poverty Law Center’s Whose Heritage? Project says that if other Confederate symbols are included, such as institution names and publicly displayed plaques, a more accurate number is that 168 were taken down in 2020.

Not a single statue was built to honor the legacy of a Black person until 1974, when the likeness of famed educator Mary McCleod Bethune became the first Black statue ever erected on federal lands. The Martin Luther King, Jr. Memorial on the National Mall was not installed until in 2011. 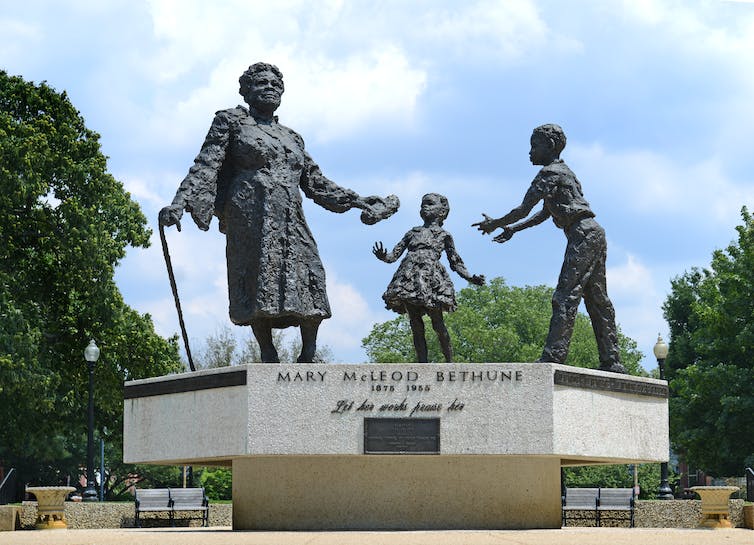 A view of the Mary McLeod Bethune statue in Lincoln Park in Washington. Linda Davidson/The Washington Post via Getty Images

Bethune’s statue stands in stark contrast to a nearby statue in Washington’s Lincoln Park. The Freedman’s Memorial, erected in 1922, immortalizes Abraham Lincoln standing clothed and erect, while a bare-chested Black man with broken chains around his wrists kneels at Lincoln’s feet.

Tensions over this controversial symbol led to the removal of a similar statue in Boston on Dec. 29, 2020. 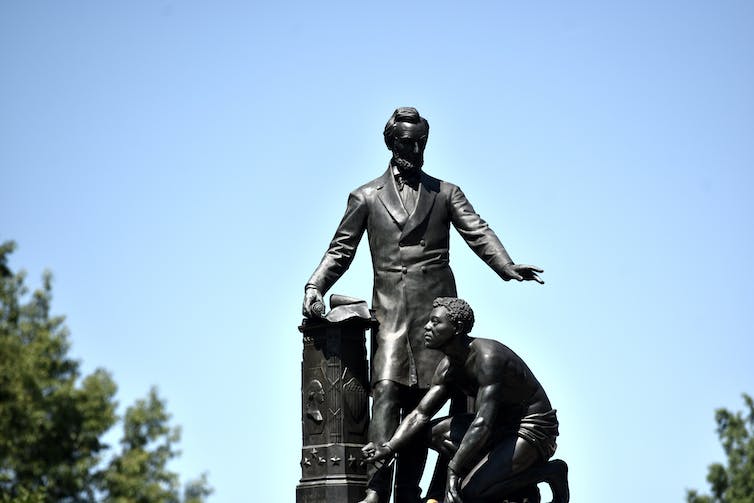 Public statues represent significant expenditures of time, money and political capital, especially with more than US$2 million and four years of legal battles spent on the Robert E. Lee statue’s removal in Charlottesville.

Public art is widely viewed as a tool to tell a more complete and honest narrative. As noted in the key findings of the Monuments Lab Audit: Monuments should be held accountable to history. “Monuments that perpetuate harmful myths and that portray conquest and oppression as acts of valor require honest reckoning, conceptual dismantling, and active repair,” the audit concluded.

Part of the repair is occurring in Charlottesville and in Richmond, Virginia, where most notably “Rumors of War”, featuring a Black man in dreds and urban streetwear atop a powerful horse, stands near the Virginia Museum of Fine Arts.

As with Charlottesville, Americans can reject the notion that our future, as now represented in public statues, is permanently fixed in stone. Perhaps when it comes to our existing statues, it is time to consider what we can melt down in other places and forge anew.