Daniel S. Levy is the author of Manhattan Phoenix: The Great Fire of 1835 and the Emergence of Modern New York (Oxford University Press). 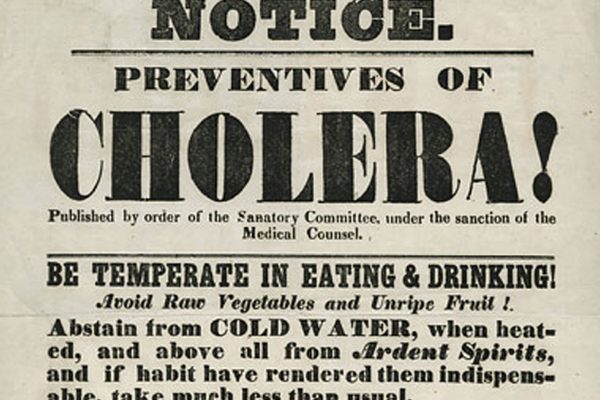 After sweeping through Asia and killing hundreds of thousands in Europe, cholera neared New York in the spring of 1832. The city had long been afflicted by diseases like yellow fever, smallpox, diphtheria, Scarlet Fever and measles, but this ungodly pandemic would be like none it had ever experienced. New Yorkers tried to prepare as this new sickness spread south from Canada and fanned across the United States, with Thomas Wharton noting in his diary on June 19 how citizens kept busy “cleaning the streets and alleys, strewing the gutters with Chlorine of Lime, and the druggists busily occupied in … specifies and prescriptions.” Little, though, could slow its advance, and six days later a Mr. Fitzgerald who lived on Cherry St. became ill. While he recovered, his wife, Mary, and children, Margaret and Jeremiah, soon died. The disease progressed quickly. When Dr. John Stearns jotted down his observations on his visit with John Coldwell on Maiden Lane, he noted how the patient reported that “The attack was sudden & violent—his impression was that ‘he fell as if knocked down with an ax.’”

Churches, offices, warehouse and shops shuttered as 100,000 residents, half the city’s population, fled. Departing carts, carriages and people jammed the streets. Passengers packed ferries, and the Evening Post wrote on July 3 how “Almost every steamboat which left New York yesterday was crowded with a dense mass of fugitives flying in alarm from the imaginary pestilence.” But what they ran away from proved to be far from chimerical. Those who remained cowered at home. James Riker Jr. wrote that his family “scarcely ventured farther than the apothecary’s opposite to obtain drugs, or examine the daily report of deaths by cholera.” Like others, the Rikers didn’t know what to do. Then his grandmother took sick on July 15. “As the day passed on she grew worse notwithstanding the efforts of a number of physicians to check the disease, and died in the night.” Riker’s uncle also perished “that gloomy night,” and the family “packed furniture enough to serve us… closed the house, and left the city in several wagons.”

Many believed cholera sprang from moral faults, drinking, depravity and filthy living. A report by hospital physicians noted how, “The disease fell in a very remarkable degree upon the dissolute and the intemperate.” The New York Mercury blamed places of “infamy,” commenting on a prostitute on Mott St. “who was decking herself before the glass at 1 o’clock yesterday, was carried away in a hearse at half past 3 o’clock.” And yet, pillars of society—doctors, alderman, clergymen and businessmen, along with Magdalen Astor Bristed, the eldest child of John Jacob Astor, the richest man in America—also died. Playwright William Dunlap wrote how “we begin to be reconciled to being killed.”

Ministers preached throughout that only the righteous would be saved, with Episcopal Bishop Benjamin Onderdonk imploring citizens to pray “in a truly devout and Christian frame of mind, with deep repentance for your sins.” While their congregations scattered, many religious figures stayed, with those like Father Félix Varela and the Sisters of Charity caring for the physical and spiritual needs of their flocks.

People had no concept of cholera’s origins or how to treat such a plague. Most did sense the existence of a link between filth and sickness. Yet unbeknownst to the most learned doctors and scientists of the time, a microscopic comma-shaped bacterium called Vibrio cholerae caused the malady. The devastating sickness spreads through water tainted by human waste and brings on nausea, vomiting, leg cramps and diarrhea. The victim’s blood pressure drops, their eyes assume a hollow, sunken look and their skin wrinkles. Subsequent dehydration bestows on the flesh a bluish hue, thus earning cholera the name the “Blue Death.”

Even though they lacked real knowledge of what to do, doctors did their best. The Board of Health set up hospitals, while physicians searched for treatments. Most proved brutal. The evangelist Rev. Charles Grandison Finney recalled how “the means used for my recovery, gave my system a terrible shock.” The most widely attempted remedy was calomel, a chalky mercury-chloride compound, and when doctors saw their patients developing pus on the gums—a sign of mercury poisoning—they believed that their treatment had worked. Physicians also did bloodletting, applied mustard poultices, immersed patients in icy water, administered powdered camphor and had patients inhale nitrous oxide and drink brandy.

Homemade cures circulated around town. The Evening Post recommended that their readers drink strained gruel, sago or tapioca. Some businesses offered disinfecting solutions, and the chemist Lewis Feuchtwanger sold cholera lamps to purify rooms by spreading “Perfumes, Scents, Essences, Aromatic Vinegar, Chloride of Soda and Lime.” And while physicians and pharmacists tried to save people, E.T. Coke commented on how quacks “flocked into the city from all quarters.”

Unfortunately, little that doctors, citizens or hucksters tried had positive effects. Death came painfully, often in just two days to a week. The minister Henry Dana Ward wrote of a friend named Maynard who “took the cholera bad.” Ward’s wife Abigail was “very attentive to him. And we were able to soothe the last moments of an invaluable life.” Yet “in the morning we buried him cold in the grave.” As painter John Casilear would note, “There is no business doing here if I except those done by Cholera, Doctors, Undertakers, Coffin makers.” Cemeteries became overwhelmed. So many bodies filled the areas that grave diggers found it easier to simply dig large trenches. In untended parts of the city, corpses lay in gutters. By the time the cholera had run its course in late August, the city of more than 200,000 residents saw the death of 3,513.

It would take years before doctors and researchers understood the cause of the disease. In 1854 Dr. John Snow studied the pattern of deaths during a cholera outbreak in London. By mapping out the location of the stricken, he showed that the disease originated from a specific polluted street water pump. When officials closed the source, cases dropped. At the same time, the Italian microbiologist Filippo Pacini first identified the cholera bacterium, and in 1885 the Spanish physician Jaime Ferrán created the first vaccine. Yet despite newer and more effective vaccines, the sickness still takes the lives of some 120,000 people around the world each year.

While cholera continued to visit New York into the late 19th century—in 1849 it killed 5,071 citizens—New York always recovered. On August 25, 1832 merchant John Pintard wrote of his relief that the disease had finally quit the city. “The stores are all open, foot walks lined with bales & Boxes & streets crowded with carts & porters cars… Now all life & bustle, smiling faces, clerks busy in making out Bills, porters in unpacking & repacking Boxes, joy & animation in every countenance.”