Luke Reader is a Teaching Fellow in the History Department at Case Western Reserve University. He is originally from the United Kingdom. He has written extensively on Brexit and is beginning a project on the Left Book Club in the 1930s. 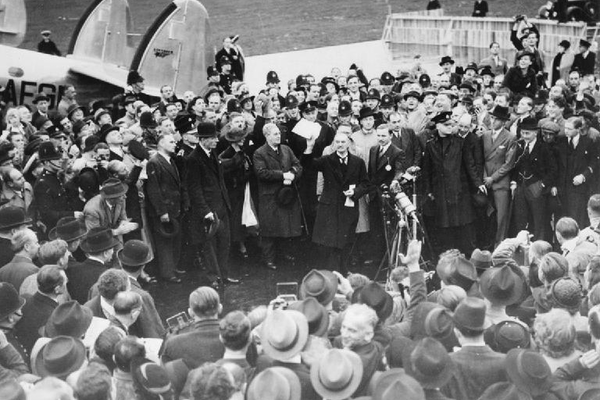 To the extent that historians do hot-takes, considering Sir Neville Chamberlain an unsung British hero of World War II is a particularly spicy number. Nevertheless, the new Netflix film, Munich: The Edge of War, suggests that historical perceptions of Chamberlain require revision.

Munich: The Edge of War, based on a novel by British author Robert Harris, uses the September 1938 conference between Britain, France, Italy and Germany to decide the fate of Czechoslovakia as the backdrop to a plot in which two diplomats, one German and one British, former Oxford University friends, scheme to assassinate Adolf Hitler. It is no spoiler to say that the Chamberlain we see in the film is not a dupe, but a canny political operator who held no illusions about the gangsters he was dealing with.

Chamberlain does not enjoy a healthy legacy. Munich is often a synonym for diplomatic betrayal in histories of interwar Britain or British foreign policy. In the United States, cable news pundits lament political concessions to one’s opponent as an act of shameful appeasement, while ghoulish talking heads urging war against enemies real or imagined—whether Afghanistan, Iraq or, today, Russia—accuse those preferring forethought of enjoying a Munich moment. Political tracts like Guilty Men and We Were Not All Wrong, published in the first years of the war, lamented Chamberlain’s credulity towards the dictators and his failure to ready Britain for war. Winston Churchill would make similar arguments in his memoirs of the war. Poor Chamberlain had no response. He was dead from bowel cancer before 1940 was over.

Munich: Edge of War makes the case for redress. Archival records of cabinet discussions in the late 1930s show a clear-eyed understanding of Nazi duplicity. Far from quailing at the massing jackbooted Nazi hordes, Chamberlain was the architect of British rearmament. In 1936, while Chancellor of the Exchequer, he began a vast, costly modernization of the Royal Navy and the Royal Air Force (RAF) and continued this policy when he became Prime Minister a year later.

In his book Britain At Bay (2020), the historian Alan Allport argues that the British prime minster was pursuing a two-pronged diplomatic strategy in which appeasement and rearmament were complementary processes. Chamberlain favored diplomacy, but is this so wrong? Even that pugnacious old bulldog, Churchill, thought “meeting jaw to jaw is better than war.” The crucial point is that Chamberlain did not shy from conflict. He simply wanted it to occur at the most advantageous moment for the country he led.

Munich: Edge of War presents viewers with a pragmatic PM who remembered that the primary obligation of a British Prime Minister is not to those living in Prague; it is to the inhabitants of places like Poplar, Pontefract and Perth. Chamberlain did ruthlessly abandon the only democracy in Central and Eastern Europe, presenting to the Czechoslovak president Edvard Benes, as fait accompli, a deal to dismember his country and hand Sudetenland, a German-speaking mountainous province bordering the Third Reich, to the Nazis. But Chamberlain and his military advisors used the months following Munich well.

Production hiccups over the construction of Spitfire and Hurricane fighters, amongst the most advanced aircraft in the world, were overcome by summer 1939. The Royal Navy grew more balanced, shifting focus from capital ships like aircraft carriers, of which Britain had nearly a dozen, to mundane vessels like mine-sweepers and escorts that would protect merchant ships supplying the British Isles with food and materiel from the Empire. Conscription augmented the tiny, 100,000-strong volunteer army. Early-warning radar stations littered the cliffs of the English Channel and the beaches of the North Sea coast. When war did erupt, Chamberlain was, in Allport’s words, a “warlord presiding over [a] military-industrial complex.”

The breathing space also gave the public time to come to terms with the looming conflict. When Chamberlain’s spoke on BBC Radio of his dismay at Britain’s entanglement in “a quarrel in a far-away country between two people of whom we know nothing,” he was evoking popular sentiment. Gallup and Mass Observation surveys indicated little desire to fight for Czechoslovakia. The Empire needed convincing as well. In 1938, Canada and South Africa had greeted with disquiet the prospect of sending their sons to die for a nation of which they really did know nothing. A year later, the Dominions were in lockstep with the metropole.

Munich: The Edge of War presents Chamberlain as a cold-blooded rationalist. If 1938 was not the moment for war, then the British PM needed to pursue peace until a more opportune moment arose. This pragmatic approach suited Britain, but it meant that Czechoslovakia was it ground underfoot by its more powerful neighbor. In 1938, it was shorn of land and industry; in early March the next year, Germany swallowed it whole. When Britain went to war six months later, it was not democratic Czechoslovakia it was defending, but fascistic, antisemitic Poland, a nation that months earlier had gleefully feasted upon the entrails of its neighbor.

The Chamberlain presented in the film is a significant reappraisal of his usual role as historical knave or villain. Shortly after the war began, influential tracts like Guilty Men charged Chamberlain with inaction, ignoring the massive military build-up of the late 1930s. Churchill agreed, adding in his memoir The Gathering Storm that had war broken out in 1938 the result would have been a swift British victory or the dispatch of Hitler by conservative, militarist Prussian Junkers who loathed the Austrian parvenu. But why trust the Junkers? Events in the 1930s, as well as more recently, show the folly in hoping leading conservatives would resist the lure of authoritarianism and side with their more liberal-minded colleagues. Chamberlain did make mistakes, seeing too late his Nazi rival’s incapacity to reason. But even here, was he really the first statesperson to not grasp that his interlocutor was, in clinic terms, bonkers?

Munich: The Edge of War complicates an historical narrative that has persisted in Britain and the United States for decades. Perhaps this reflects a preference for histories of heroes and villains, not complexity. The reevaluation of Chamberlain film offers a lesson historians decrying appeasement forget: what point is there to war if you cannot guarantee (or reasonably expect) victory? Munich: The Edge of War suggests that it took more than the poetry of Churchill’s words and the endeavors of gallant RAF pilots above the skies of southeast England to save Britain in 1940. None of this would have been possible without the actions of Chamberlain in the years preceding the outbreak of war.