Michael Patrick Cullinane is Professor of U.S. History at the University of Roehampton in London, UK. He received the 2018 Theodore Roosevelt Book prize for Theodore Roosevelt’s Ghost: The History and Memory of an American Icon, and is the author of the new Remembering Theodore Roosevelt: Remembrances of His Contemporaries (Palgrave MacMillan). 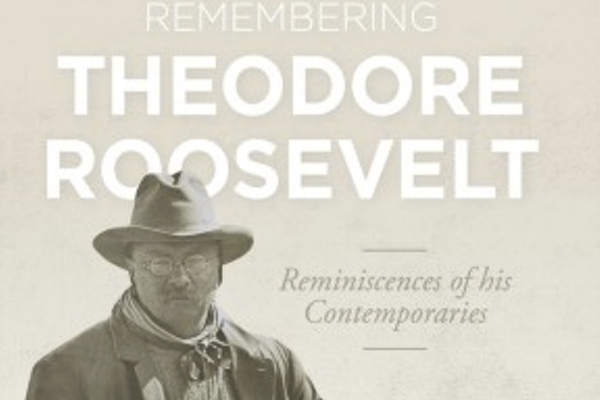 Given the countless studies of Theodore Roosevelt, I thought that every historical source had been strip mined. Discovering something new seemed unimaginable. When I found seven audio recordings at the Theodore Roosevelt Birthplace in Manhattan, I asked biographers and historians if they heard them. None had. Locked away for more than sixty years, the tapes remained a mystery. Even the archivists wondered what they sounded like.

In 2017, I paid a reproduction service to have the analog recordings digitized and, to my surprise, a dozen of Roosevelt’s contemporaries spoke to me about his life and times. His eldest daughter Alice Longworth mumbled through my speakers in an old-world accent, rambling through childhood memories and her experiences in the White House. For nearly two hours, Mrs. Longworth spoke of her political opposition to the League of Nations, the rivalry between her father and Woodrow Wilson, and her fierce dislike of communists. She reminisced about the Roosevelt family, not least of Hyde Park cousins Franklin and Eleanor. And other Roosevelts joined in. TR’s nieces and nephews talked for more than three hours about alcoholism, infidelities, animosities, tragedies, and resentment. Once shadowy family figures became vibrant characters. Neighbors recalled childhood hijinks at the Roosevelt estate on Long Island. Political acolytes explained how Roosevelt functioned through a network of disciples. All the voices told of key moments in Roosevelt’s life, from the Rough Riders to his presidential administration and post-presidential adventures.

The audio file provoked new impressions of TR, his family, and his times. This is what makes the discovery historically significant. These recordings complicate our understanding of the past. Oral histories have that capacity. Unlike textual documents, the recordings relate stories in a non-linear, stream of consciousness that reveal the lived past in a way that written correspondence or edited memoirs cannot. Roosevelt’s friends bubble with emotion. His family express their fears of sharing stories with prying outsiders, then proceed to tell all. Friends entertain “what if” counterfactuals and admit to personal insecurities, as if sitting with a therapist rather than an interviewer. As sociologist Paul Thompson writes, oral history gives voice to “the people who made and experienced history through their own words.”[1]

Naturally, some of the most revealing stories revolve around Theodore Roosevelt. One theme appears in each account: Roosevelt had an abnormal ability to remember people. In one instance we hear that Roosevelt picked out a single sailor on a boat of hundreds, simply to acknowledge that he met the man a decade prior. In another yarn, he reprimanded a New York City police officer for being aloof; while serving as New York’s Police Commissioner, Roosevelt had promoted the police officer to sergeant years earlier. We even learn how Roosevelt trained his memory. His niece said he would put his hand over his eyes and, after a moment, recall vivid details about an encounter as if plucked from a photo album. This uncanny skill might explain Roosevelt’s connection to constituents.

Equally impressive is his empathy with children. Alice Roosevelt has often been described as an unmanageable youth, but Roosevelt’s sons got into as much trouble. In the oral histories, we learn about how they terrorized staff, ran amok through the White House, and destroyed property. Roosevelt never scolded his children or their friends, and more often laughed alongside them, showing lenience and a sense of humor. Many more intimate moments spring from the interviews: the political backrooms, dinner parties, even the moment he received news of the death of his son Quentin. With these reminiscences our image of Roosevelt becomes more human and less heroic. We see a father, a friend, and a husband more than a politician or statesman.

The oral histories also showcase the outsized role that the Roosevelt women played. While men like Theodore and Franklin have attracted ceaseless attention, the oral histories establish the Roosevelt women as a commanding force in the family as well as national politics. TR’s sisters Anna and Corinne deserve specific mention. Anna held secret meetings for her brother in Washington and regularly advised on political decisions. Corinne became a leading figure in the Republican Party. By all accounts, each one could enliven a party just by making an appearance. Many other extraordinary women feature in the oral histories. Indeed, half of the participants in the project were women, including former First Lady Eleanor Roosevelt, both of TR’s daughters, three nieces, five neighbors, and one daughter-in-law. The book seeks to show what made them special and delves into the Gilded Age gender customs that they accepted as frequently as they rejected.

The oral history project began in 1953, and project staff recorded twenty-one interviews over the following two years. The recordings that survive account for less than half of the collection. That is because project staff re-recorded over tapes after sending written transcriptions to Columbia University. Remembering Theodore Roosevelt brings together these written transcribed accounts with the never-before heard audio transcriptions. It explains the inspiration of the project, the team behind the recordings, and the major conclusions we might draw from the newly reunited collection. Each chapter presents one interview, often a two-person dialogue, but occasionally a conversation with three or four participants. The book also includes a list of the interviews, when and where they occurred, and the archives where intrepid researchers can find them. The digitized recordings are now accessible to the public, as are the unabridged transcribed testimonies.

What the book does not do is reproduce all the oral histories verbatim. Like other edited collections, such as TR’s letters that were published in the 1950s, I have omitted overlapping accounts. I have also made editorial judgements about what is historically significant. It would have been impossible to publish everything. Think of Remembering Theodore Roosevelt as a critical guide to the sources that can bring readers one step closer to the time of Theodore Roosevelt.