To Grasp Geopolitical Transformations, Don't Forget to Look at the Map

Tim Marshall is the author of THE POWER OF GEOGRAPHY: Ten Maps That Reveal the Future of Our World, on sale now from Scribner. Marshall is a leading authority on foreign affairs with more than 30 years of reporting experience. He was diplomatic editor at Sky News, and before that was working for the BBC and LBC/IRN radio. 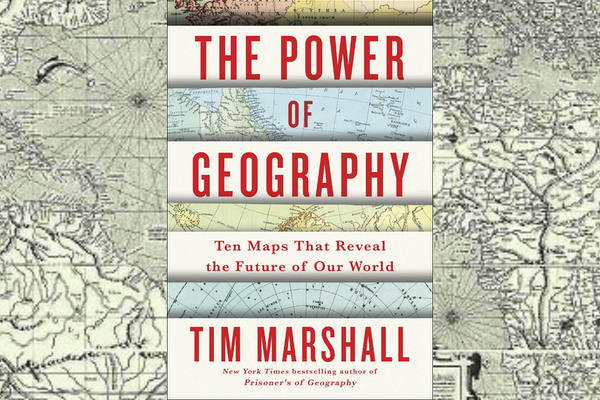 Type “Map of the world” into a search engine. Click images, then hit return. Most results will have Europe slap-bang in the center—they’re out of date.

Sure, there’s no geographic center on the outside of a planet, and you can’t accurately depict a globe on a flat surface, so you must choose somewhere to be in the middle. But why Europe?

Historians know of the great Flemish cartographer Gerardus Mercator, and it’s his 1569 cylindrical projection, designed for nautical navigation, which dominates how we see the world. In the 21st century the problem with the Mercator map is not just that it overinflates the sizes of North America and Europe, and that Greenland is way smaller than shown, but also that it depicts the world view of those who first circumnavigated the planet and perpetuates the subconscious idea of a dominant Europe even though the economic and political center is now the Indo-Pacific region.

How a geographic space is framed, along with theories about geopolitics, can seem abstract but they shape how we think. It follows that if some are out date, but we still use them, they risk holding back useful ways to think about the world. The Indo-Pacific is an idea whose time has come.  Maps depicting the region in the center of the world would help us understand how much power has shifted.

This can take time. In September President Biden referred to the Australian Prime Minister Scott Morrison as “That fella Down Under” and, perhaps unwittingly, was channeling the Greek mapmaker Claudius Ptolemy. Circa 150CE he was ruminating about the “Terra Australis Incognita” or “Unknown Southern Land.” He reasoned that if the world was a sphere, and on the top of it was the land he knew of, it followed that to prevent it from toppling over, there had to be land on the bottom. Some of this was spot on. Australia is still thought of as “Down Under” which is true if you are in Europe, but of course in Australia “down under” is Europe and in the USA it's the Indian Ocean.

It’s not just subconscious framing of our world view, which is shaped by maps, they are also crucial for a full understanding of the “why” and “how” of many historical events and eras. A student studying the history of the rise of British Empire would be well served early on in their reading if presented with a map of Britain’s oak trees in the 1500s.  Henry VIII had more than 100,000 trees (mostly oak) cut down to build what became the Royal Navy. Oak is seaworthy timber with a closed cell structure, it is also harder than most woods and therefore could better withstand cannon ball fire. Britain may have had more oak trees than the rest of Western Europe which, combined with deep water ports, and direct access to the oceans, gave it an inbuilt advantage as the age of European exploration, and exploitation, arrived. The official march of the Royal Navy remains “Heart of Oak.” When we arrive at the 1800s another map, this time of Britain’s coal fields, will also support an understanding of how the Empire reached its heights.

Geography is not destiny; there are many factors determining why events occur, and why leaders of countries make their decisions, but of these the most overlooked, especially in the news media, is geography.  Making sense of history, or modern geopolitics, without a map and an explanation of geography is almost impossible. Words can tell you the “what;” the map gives clarity to the “why.”

Russia provides two clear examples of the effect of topography.  It has been invaded many times from the flat ground of the North European Plain, and so its rulers seek to dominate that space as a buffer zone against further incursions.  Some Russian ports freeze in the winter and ships must head up into the ice pack of the Arctic. Therefore, the Crimean port of Sebastopol on the Black Sea is of vital importance.  When Ukraine “flipped” into the NATO sphere of influence in 2014 Russia’s lease on the port only had 28 years left on it, President Putin felt geography had given him no choice but to invade and annex the territory.

In this way of looking at the world topographical maps are as important as political versions. Of course, the borders matter, but so does the direction in which a river flows across them. As the Dutch-American geopolitical theorist Nicholas Spykman (1893-1943) wrote, “Geography does not argue."

My approach in writing is to start with the geography of a country, region, or conflict, to see what is and is not possible. Then, if we layer on the history, and finally the current political situation, it becomes easier to understand the subject. In my new book The Power of Geography I take the same formula including on the final chapter on Space. It’s useful to frame Space as a geographic location with its own “oceans,” mountains, and choke points, notably low earth orbit.

Twenty years ago, an American professor, Everett Dolman wrote a book titled Astropolitik. Most of his predictions have come to pass. There is already great power competition and the beginnings of the militarization of outer space. Dolman argued that this rivalry would result in a Westphalian conception of the cosmos. This too is already upon us with several countries agreeing to “safety zones” on the Moon, a phrase which has echoes of “spheres of influence.” When the history is written its probable the moon will be seen as simply a steppingstone, after all, we’ve always needed a port to pull into on our way to somewhere else.

Military types and historians are among those most attuned to the geographical influence on events, but many disciplines fail to take it into account. To properly understand the “why” of a major geopolitical event takes a reading of the politics, a glance at the statistics, and a look at the map.  Sometimes the obvious is not apparent.  As George Orwell said: “To see what is in front of one’s nose needs a constant struggle.”