Latitude: The Pioneering International Mission to Measure the Earth

Nicholas Crane is an award-winning writer, journalist, geographer and explorer who has presented BAFTA winning, BBC TV series Coast.  He writes for the Daily Telegraph, the Guardian and the Sunday Times. His most recent book is Latitude: The True Story of the World's First Scientific Expedition. 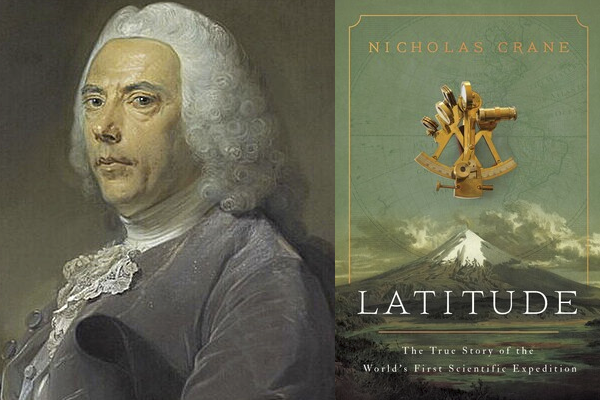 Understanding climate change and pandemics requires global collaboration. But when did scientists from different nations learn to pool their expertise? If we track back through time, we alight convincingly on the year 1735, when twelve men from France and Spain began their attempt to measure the length of one degree of latitude at the equator. Their expedition to South America became the talk of the Enlightenment. Most were agreed that the world was not spherical. But was it stretched at the poles, or flattened? Was it prolate or oblate? Was it an egg or a pumpkin? In the prolate camp were followers of the French philosopher, René Descartes. Those convinced that Earth was oblate were led by the English mathematician, Isaac Newton. It was more than an abstract debate. Without knowing the precise shape of the earth, it was not possible to compile accurate sea charts and land maps. The argument could be resolved by comparing the length of one degree of latitude in the northern hemisphere, with one degree at the equator. If the equatorial measurement was shorter, Earth was oblate. Leading the expedition were three members of the Academy of Sciences in Paris. To help with the surveying and ease their passage through South America, they were joined by two young Spanish naval lieutenants selected for their expertise in navigation and astronomical observations.

The Geodesic Mission to the Equator faced formidable challenges. The least inaccessible stretch of equator suitable for measuring latitude was thought to be a valley high in the Andes mountains, separated from the coast by thick rainforest. One degree of latitude spanned about 60 miles of the earth’s surface. But to improve the accuracy of their result, the French leaders of the Mission decided to measure three degrees. To achieve this, they would lay out a 120-mile chain of virtual triangles, fixed at their corners by signals that would be used as surveying stations. Triangulation had been pioneered two centuries earlier, in the Low Countries, where surveyors had used high points such as church towers for placing their instruments.  The Geodesic Mission to the Equator planned to place their sensitive quadrants on mountaintops.

They ran into difficulties from the start. The expedition leader squandered vital funds in a Caribbean brothel. The youngest of the twelve, an aspiring teenage assistant called Jacques Couplet-Viguer, died of fever within days of starting the survey. Then one of the Spanish naval lieutenants killed the secretary of Quito’s president. On their first high mountain, a volcano known as ‘The Vesuvius of Quito’, three of the team succumbed to altitude sickness and had to abandon the summit after three weeks in a snow-bound, storm-battered hut. Triangle by triangle, they persevered. Two years after commencing the survey, they reached their final high peak, Sinasaguan, where a storm blew in and shredded the tents, snapped the tent poles and drove the surveyors into ravine. Later, one of them wrote of ‘wind, snow, frost, and the cold . . . little or no provisions, a scarcity of fuel, and in a manner destitute of shelter’.  Watching from the valley as the storm clouds boiled around the summit of Sinasaguan, the local priest offered prayers for the foreign surveyors. Eventually, the exhausted team completed their chain of measured triangles and rode wearily into the town of Cuenca, where the annual fiesta was about to take over the streets in a chaos of bulls and chicha. One thing led to another, and the Mission’s surgeon became embroiled in an altercation that led to a dagger being plunged into his spleen. He died horribly, several days later.

One year later, in August 1740, the surveyors were still in the Andes. To finalize their calculations, they had to pinpoint the two ends of the chain of triangles through a series of astronomical observations using a delicate instrument known as a zenith sector. Storms, earthquakes and flaws in the instruments delayed the observations and it wasn’t until early in 1743 that they managed to snatch the necessary sightings, which proved beyond doubt that the earth was indeed oblate. One degree of latitude was shorter at the equator than in the far north. The planet bulged at its midriff.

Not all of the Mission’s survivors returned to Europe. Hugo, the instrument technician had insufficient funds and found a new life in South America, making tiles. The expedition draughtsman–also broke–found work repairing churches but fell to his death from scaffolding. The better-connected members of the Mission managed to recross the Atlantic. One of the Spanish naval lieutenants was captured at sea by the British and suffered a spell in Portsmouth jail before being released and returned as a hero to Spain. His companion became the Spanish ambassador in Morocco, and his bust later graced the reverse side of the 10,000 peseta banknote. Of the three French Academicians, Pierre Bouguer went on to write the definitive account of the Geodesic Mission to the Equator and an important treatise on ship architecture. The Mission’s maverick, Charles-Marie de La Condamine, also wrote an account of the expedition and later penned a paper proposing that all nations should adopt a standard unit of length, although it was another half-century before the meter was formally defined in French law as one ten-millionth of the distance between the North Pole and the equator. La Condamine died of blood poisoning after insisting that he be subjected to a new form of hernia surgery.

Three countries could take credit for the success of the Geodetic Mission to the Equator. France and Spain provided the impetus, funding and key personnel. Britain provided the Newtonian script and the latest scientific instruments. From the Caribbean and the Viceroyalty of Peru came a largely un-recorded cohort of slaves, guides, porters and officials who made it possible for a dozen foreigners to operate for a decade in unfamiliar and hostile terrain. The shape of Earth had been defined through international collaboration. Navigation and trade would be enhanced. But the Mission returned to Europe with more than a figure for latitude. During interludes in the geodesy and astronomy, they amassed findings on quinine and rubber, platinum and gravity, magnetism and the aberration of light. They researched the speed of sound at altitude and conducted the first measured survey of a major Inca site. The two Spanish lieutenants returned with an invaluable dossier uncovering human rights abuses in colonial South America.

The Geodesic Mission to the Equator became the model for a new form of expedition, motivated by the urge to explore. The Mission’s scientists and technicians showed how a disparate group of human beings from different countries and backgrounds could pool their collective resources and solve problems. They innovated. They combined ideas. They grasped that the dogged slog of incremental improvements would led to a result. They proved future science.