The Japanese Surrender in 1945 is Still Poorly Understood

Jeremy Kuzmarov is managing editor of CovertAction Magazine and teaches history at Tulsa Community College. He has written four books on U.S. foreign policy, including most recently, Obama's Unending Wars (Clarity Press, 2019).  Roger Peace is the initiator and coordinator of the open resource educational website, U.S. Foreign Policy History and Resource Guide.  See their recent essay on the website, “The United States and World War II.” 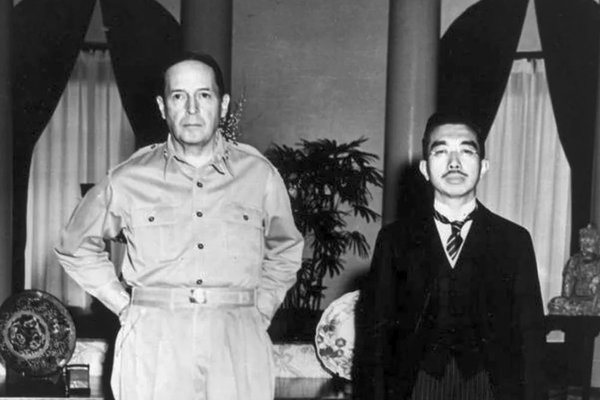 Most Americans then and now believe that it was necessary for the U.S. to drop atomic bombs on Hiroshima and Nagasaki in order to induce Japanese leaders to surrender.  This is not what most U.S. generals believed at the time.

General Dwight Eisenhower, in his memoirs, recalled a visit from Secretary of War Henry Stimson in late July 1945:  “I voiced to him my grave misgivings, first on the basis of my belief that Japan was already defeated and that dropping the bomb was completely unnecessary, and secondly because I thought that our country should avoid shocking world opinion by the use of a weapon whose employment was, I thought, no longer mandatory as a measure to save American lives.  It was my belief that Japan was, at that very moment, seeking some way to surrender with a minimum loss of ‘face.’”  Eisenhower reiterated the point years later in a Newsweek interview in 1963, saying that “the Japanese were ready to surrender and it wasn’t necessary to hit them with that awful thing.”

In fact, seven out of eight top U.S. military commanders believed that it was unnecessary to use atomic bombs against Japan from a military-strategic vantage point, including Admirals Chester Nimitz, Ernest King, William Halsey, and William Leahy, and Generals Henry Arnold and Douglas MacArthur.  According to Air Force historian Daniel Haulman, even Curtis LeMay believed “the new weapons were unnecessary, because his bombers were already destroying the Japanese cities.”

Admiral Leahy, Truman’s chief military advisor, wrote in his memoirs:  “It is my opinion that the use of this barbarous weapon at Hiroshima and Nagasaki was of no material assistance in our war against Japan.  The Japanese were already defeated and ready to surrender because of the effective sea blockade and the successful bombing with conventional weapons.”

That the Japanese were on the verge of defeat was made clear to the president in a top-secret memorandum from Secretary of War Henry Stimson on July 2, 1945.  Stimson noted that Japan “has no allies,” its “navy is nearly destroyed,” she is vulnerable to an economic blockade depriving her “of sufficient food and supplies for her population,” she is “terribly vulnerable to our concentrated air attack upon her crowded cities, industrial, and food resources,” she “has against her not only the Anglo-American forces but the rising forces of China and the ominous threat of Russia,” and the United States has “inexhaustible and untouched industrial resources to bring to bear against her diminishing potential.”

Stimson concluded that the U.S. should issue a warning of the “inevitability and completeness of the destruction” of Japan if it fails to surrender, adding, “I personally think that if in saying this we should add that we do not exclude a constitutional monarchy under her present dynasty, it would substantially add to the chances of acceptance.”

Indeed, acceptance of Japan’s constitutional emperor was the main sticking point for Japan’s War Council, the six-person decision-making body over which Emperor Hirohito nominally presided.  The council members were cognizant of Japan’s dire predicament but not necessarily ready to surrender unconditionally.  They were split, three to three, between hawkish members seeking to get the most out of a peace agreement, to the point of maintaining Japanese control over parts of China, and dovish members inclined to give way on every condition but one, the preservation of the emperor.

General MacArthur believed that Japan would have surrendered as early as May 1945 if the U.S. had not insisted upon “unconditional surrender.”  MacArthur was appalled at the Potsdam Declaration, issued by the U.S., Britain, and China on July 26, which threatened “utter destruction” if Japan did not surrender unconditionally.  As his biographer, William Manchester, wrote,

“He knew that the Japanese would never renounce their emperor, and that without him an orderly transition to peace would be impossible anyhow, because his people would never submit to Allied occupation unless he ordered it.  Ironically, when the surrender did come, it was conditional, and the condition was a continuation of the imperial reign.  Had the General’s advice been followed, the resort to atomic weapons at Hiroshima and Nagasaki might have been unnecessary.”

There were, in fact, early drafts of the Potsdam Declaration that offered assurances of the emperor’s status, but these were nixed by Secretary of State James Byrnes, with whom Truman agreed.  Members of General George Marshall’s staff argued in June 1945 that any clarification of the term “unconditional surrender” must be written in the form of “an ultimatum” and not in a way to “invite negotiation.”  It was assumed that the American public was in favor of this inflexible position.

Admiral Leahy, on the other hand, “said he could not agree with those who said to him that unless we obtain the unconditional surrender of the Japanese that we will have lost the war,” according to the June 18 meeting minutes.

“He [Leahy] feared no menace from Japan in the foreseeable future, even if we were unsuccessful in forcing unconditional surrender.  What he did fear was that our insistence on unconditional surrender would result only in making the Japanese desperate and thereby increasing our casualty lists.  He did not think this was at all necessary.”

The impending entry into the war by the Soviet Union made Japan’s surrender all the more likely, according to a U.S.-British Combined Intelligence Estimate report on July 6.  Commenting on this report in a letter to Prime Minister Winston Churchill, British General Hastings Ismay concluded that “when Russia came into the war against Japan, the Japanese would probably wish to get out on almost any terms short of the dethronement of the Emperor.”

President Truman was well aware of this.  At the Big Three meeting in Potsdam, Germany, Truman recorded in his journal on July 17, “Believe Japs will fold up before Russia comes in.”  He also wrote to his wife that evening, “We’ll end the war a year sooner now, and think of the kids who won’t be killed.”

As it was, the final Potsdam Declaration demanded that there “must be eliminated for all time the authority and influence of those who have deceived and misled the people of Japan into embarking on world conquest,” and that a government must be “established in accordance with the freely expressed will of the Japanese people.”  Japan’s War Council saw no ameliorating language in this declaration and thus rejected surrender.

Truman subsequently gave the go-ahead for the atomic bombing of Hiroshima without waiting for Soviet entry.  Notwithstanding the horrendous results – a United Press report on August 8 stated that “as many as 200,000 of Hiroshima’s 340,000 residents perished or were injured” – he approved a second atomic bombing that obliterated Nagasaki on August 9.

Japan’s War Council met on the evening of the 9th and agreed to surrender but with one condition:  the emperor must be retained.  Upon receiving Japan’s response, Secretary Byrnes was instructed to modify the original language to accommodate the Japanese condition.  The document thus read:  “the authority of the Emperor . . . shall be subject to the Supreme Commander of the Allied Powers.”  The emperor, as such, would be retain his symbolic authority under U.S. rule.  This simple change made the proposal acceptable to both sides.

On August 15, Emperor Hirohito gave a radio address to the Japanese people announcing that Japan would “effect a settlement of the present situation,” accepting defeat.  In hindsight, Japan’s surrender could likely have been achieved without the atomic bombings, given that the U.S. allowed the emperor to remain in the end.

Truman would later claim that “half a million American lives” were saved by the atomic bombings in lieu of a U.S. invasion of the Japanese mainland.  This framing was disingenuous, however, as it omitted the real possibility of ending the war by altering the terms of surrender, a third option.

The diplomatic option was certainly the most humane and deserved priority.  It was also the most realistic.  The U.S. would need the emperor’s blessings along with the cooperation of Japanese officials, agencies, and citizens in order to exercise its authority over Japan in the aftermath of the war.

The assertion that the atomic bombings forced Japan to surrender was not supported by a U.S. Strategic Bombing Survey, published in July 1946, which noted that the decision of Japanese leaders “to abandon the war is tied up with other factors. . . . It cannot be said, however, that the atomic bomb convinced the leaders who effected the peace of the necessity of surrender.”