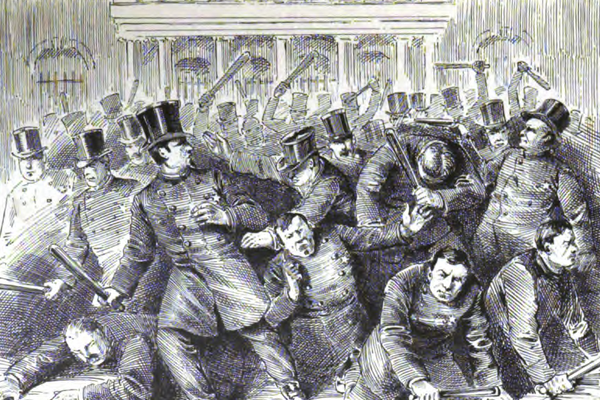 Complaints about the New York City Police Department, or NYPD, are as old as the department itself. When the police department was first established in 1845, it had difficulty coping with the city’s rising immigrant population and crime in the pre–Civil War years. It was also hard for civilians to induce police officers to investigate thefts or seek to recover stolen property without the promise of a substantial private reward. Detectives would end up splitting the reward money with the thieves and their criminal “fences,” who returned the stolen goods in exchange for immunity from prosecution.

Then in 1857, rival groups of policemen battled one another on the steps of city hall in a contest for authority. In the ensuing confusion, the city’s downtown gangs went on a bloody spree that police were powerless to quell. Known as the Dead Rabbits Riot, it was fomented by an Irish gang,  whose leader would be played by Leonardo DiCaprio in the 2002 Martin Scorsese film Gangs of New York.

Things began to change in the Gilded Age starting in the 1870s, when the city’s moneyed classes demanded protection from a growing class of professional criminals. These included shoplifters, pickpockets, street muggers, counterfeiters, hotel thieves, and the cream of the crime world, the aristocrats of thievery: the bank burglars. A tough, intelligent, honest detective named Thomas Byrnes solved the largest bank robbery in the city’s history in 1878 (it still holds the record) by nabbing the crooks and refusing to negotiate with them. Byrnes proceeded to purge Wall Street of professional thieves – arresting any who dared appear below a "dead line" – thereby making the workd safe for plutocracy.

But Byrnes wanted to do more: to turn New York’s police detective bureau into another Scotland Yard, the fabled London police force. He replaced aging, lazy detectives with energetic, college-educated men. Given enhanced powers as chief inspector, and later as police chief, Byrnes famously instituted several innovations in policing. Anyone arrested in the prior twenty-four hours was brought downtown for the “morning parade,” a daily lineup that allowed detectives to view suspects up close. Byrnes also followed the practice of photographing each person arrested in the city, with the most wanted appearing in the famous rogues’ gallery in police headquarters. The mug shots and accompanying rap sheets were also distributed to each of the city’s police precincts and sent to police departments across the country. The rogues’ gallery was, for nineteenth-century American law enforcement, a tool akin to facial recognition systems in the twenty-first century.

Less admirably, perhaps, but no less effectively, Byrnes pioneered the use of the “third degree” interrogation method. At times this involved what author Jacob Riis, a police reporter early in his career, called “a little wholesome ‘slugging.’” But most of the time, Byrnes preferred using psychological warfare: getting criminals to admit their guilt by promising them leniency, or claiming their coconspirators had ratted them out (whether true or not), or showing them the incontrovertible evidence of their crimes.

In one case, involving a man who’d mutilated his roommate and stuffed him in a trunk, Byrnes obtained a confession by transporting the contents of the apartment, the murder weapon, and the bloody articles of clothing to police headquarters and parading them one by one in front of the horror-stricken prisoner. Muckraking journalist Lincoln Steffens, a grudging admirer, called Byrnes “a man who would buy you or beat you, as you might choose, but get you he would.” Indeed, Byrnes triumphed in a series of high-profile cases, including New York’s own “Jack the Ripper” murder in 1891 in which an aging prostitute was disemboweled in a seedy waterfront hotel room.

Byrnes’s occasionally rough tactics—he was disdainful of suspects’ constitutional rights—were arguably necessary to solve major crimes at a time when forensic analysis such as fingerprinting and blood typing was decades away, and ballistics were crude at best. Yet as policing became ever more specialized and efficient, so did crime. Murders grew more ruthless and macabre, robbers increasingly carried firearms, and the street gangs of old transformed into hierarchal criminal enterprises, giving birth to organized crime, including the Mafia.

Bribe-taking by the police remained rampant as prostitutes, gamblers, and saloonkeepers paid enforced tribute to ply their trade without interference. As the decades unfolded, corrupt cops and clever criminals at times blurred together, leading to waves of police reform at the hands of men like Theodore Roosevelt, who headed the police commission starting in 1895. Roosevelt, believing Byrnes to be a relic of the past, forced him to resign, then initiated his own set of police department innovations: a civil service merit system; rigorous disciplinary trials; a pistol range for target practice; telephone call boxes; and a bicycle squad. Roosevelt’s unpopular morality campaign against Sunday liquor sales, however, would cause him to step down two years later (and go off to head the Rough Riders in Cuba).

Rogues' Gallery is the story of the origins of modern policing and organized crime in the late nineteenth century as witnessed on the bustling streets of Old New York. Among the colorful characters who appear: Marm Mandelbaum, a matronly German-immigrant woman who paid off cops and politicians to protect her empire of fencing stolen goods; "Clubber" Williams, a sadistic policeman who wielded a twenty-six-inch club against suspects, whether they were guilty or not (police brutality being largely unpunished back then); Danny Driscoll, the murderous leader of the Irish Whyos Gang and perhaps the first crime boss of New York; Big Tim Sullivan, the corrupt Tammany Hall politician who shielded the Whyos from the law; the suave Italian Paul Kelly and the thuggish Jewish gang leader Monk Eastman, whose rival crews engaged in brawls and gunfights all over the Lower East Side; and Joe Petrosino, a Sicilian-born detective who brilliantly pursued early Mafioso and Black Hand extortionists until a fateful trip back to his native Italy.

Set against the backdrop of New York’s Gilded Age, with its extremes of untold wealth, tenement poverty, and rising social unrest, Rogues’ Gallery offers echoes, and lessons, for our own time.