Richard Vague serves as Pennsylvania Banking and Securities Secretary. Prior to his 2020 appointment, he was managing partner of Gabriel Investments and chair of The Governor’s Woods Foundation, a nonprofit philanthropic organization. Previously, he was co-founder, chairman and CEO of Energy Plus, an electricity and natural gas company. Vague was also co-founder and CEO of two banks and founder of the economic data service Tychos. His new book is An Illustrated Business History of the United States (University of Pennsylvania Press, May 21, 2021). Learn more at richardvague.com. 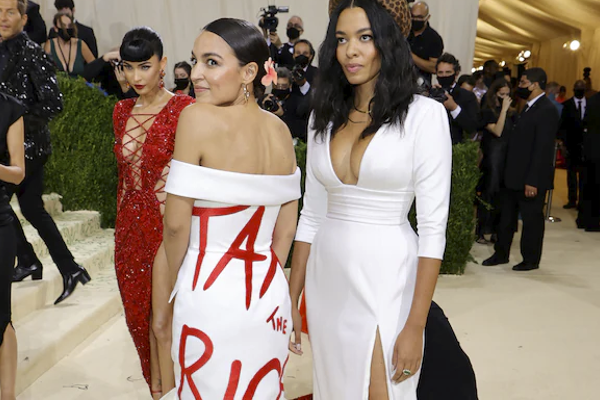 US Rep. Alexandria Ocasio-Cortez (D-NY) wears a dress with the slogan "Tax the Rich" at the 2021 Met Gala. With her is the dress's designer Aurora James.

Two things have been ever-present in the history of American wealth: 1) inequality grows, and 2) it then gets redressed through adjustments and policies when the gap between the haves and have nots brings pronounced stress in society. Both things are part of American business history, so the calls in 2021 for child tax credits or higher minimum wages are not inconsistent with similar calls in the past.

In its earliest days, America had far less wage inequality than its European forbears — slaves and the scourge of slavery excepted — since land was plentiful and labor was scarce, the very opposite of the conditions found in Europe. The average wages in America quickly exceeded those in Europe.

But wealth inequality rose dramatically to its first historical peak in the mid-to-late 1800s with the massive railroad, steel, and coal companies of the Industrial Revolution. Many workers’ lives deteriorated as they descended into coal mines and trudged into steel mills, and their livelihoods became bound to the unforgiving boom and bust cycle of industry.

Soon a chasm separated the very wealthy and the poor. Immigrants flooding into the United States often lived in heartbreaking, abject poverty — made all the more disturbing in contrast to the glittering lifestyles of the wealthy that surrounded them.

Depressions such as the one that followed the Panic of 1893 led to steep wage reductions at large companies. For miners and other workers already living at subsistence levels, these reductions had grim consequences. They led to social disruption in the form of strikes that were often lethal, including the Bituminous Coal Miners’ Strike of 1894, the Lattimer Massacre in 1897, and the Battle of Virden in 1898.

As the fortunes of a select few grew to previously unimaginable heights and economic inequality climbed right along with them, the Progressive political movement developed in the early 1900s to oppose laissez-faire capitalism and monopolistic corporations and to close the inequality gap.

But Henry George, the most famous economic writer of the Progressive era, had a more dramatic approach to wealth inequality. He railed against low wages and inequality and espoused a philosophy known as Georgism, which contended that the benefits of land belonged equally to all. He advocated for a “single tax” on the unimproved value of land, arguing all government revenue should come from this tax. Although all but forgotten today, George’s most famous work, Progress and Poverty (1879), sold millions of copies internationally and likely had a larger worldwide circulation than any work on economics ever written.

The decimation of fortunes in the Great Depression and widespread demand for labor in World War II once again reduced our nation’s inequality, albeit by grim means, and in the 1950s and 1960s the middle class reach an apex as measured both by percent of the population and relative income.

Unions ascended in power and influence — in automobiles, steel, mining, communications, trucking, and more. Union members were 7 percent of the workforce in 1930. Through the Great Depression that figure rose to 18 percent and then peaked at 28.3 percent in 1954. These unions won and expanded key benefits, especially pensions and health care. Today unions represent only 10.8 percent of the workforce.

In recent decades, however, the rise in inequality has crept up yet again. In the United States, the Gini coefficient, which measures inequality and where a higher number represents greater inequality, has climbed markedly from 0.40 in 1980 to 0.48 in 2019.

It should not shock or surprise us, therefore, that we’re once again hearing about policies to narrow the wealth inequality gap. Some attribute the large followings of both Donald Trump and Bernie Sanders partly to the discontents created when the haves and have nots are so far apart.

Proposals for a $15 minimum wage, more support for childcare and education, and even an alternative minimum income did not emerge out of nowhere as radical notions imported from Western Europe. To the contrary: measures to narrow wealth inequality have been as constant in U.S. business history as the growth of wealth inequality itself.