John Troast is a Hamilton College junior and is majoring in history. He can be reached at jtroast@hamilton.edu. 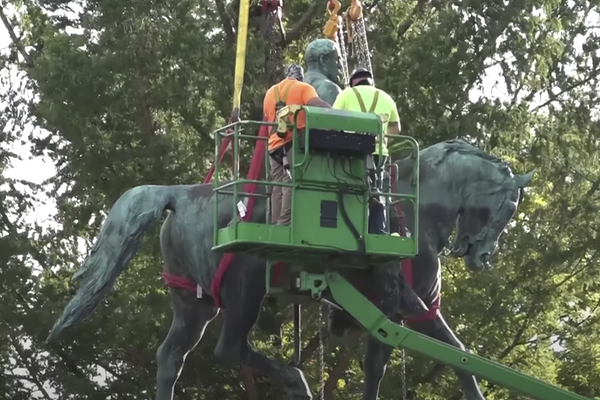 Charlottesville’s recently removed statue of Robert E. Lee is not a statue of a man, it is a statue of a myth. From its inception, the monument has always represented a flawed vision of history born out of the Lost Cause, a revisionist approach to history that argues among other things that the Southern cause was noble and just. The statue might physically depict Lee but for those who believe in the myth, it symbolizes far more. For them, it is a statue emblematic of a heritage and way of life, founded upon the principles of White racial superiority.

It is a symbol of a culture that lives on even after the war that sought to destroy it ended over 150 years ago. In this sense, perhaps the “Lost” Cause was never really lost. There is no disputing that the Union won the Civil War. However, by promoting the Lost Cause myth through monuments, government policy, education, and other aspects of southern life, the South created its own history, its own “facts,” and thus it won the peace - at least for a time.

As the last vestiges of the Lost Cause slowly wither away, denialists (those who still believe in the myth) are bound to resist. This resistance manifested itself in the Unite the Right Rally in Charlottesville and in countless other struggles across the nation to remove Confederate iconography.

Although the Lee Monument has always represented a dangerous myth, perhaps its symbolism is finally changing. The Unite the Right Rally and its aftermath has re-contextualized the monument from a symbol strictly dedicated to the Lost Cause to a symbol of America’s ongoing struggle with race relations. The monument has taken on new meaning and new historical significance as a rallying point for social justice activism.

Although a tragic event, the violence in Charlottesville has forced the nation to think critically about our past and what we want for the future. Scholars will undoubtedly look back on the debate over the Charlottesville Lee Monument and the Unite the Right Rally as a seminal moment in 21st century American history.

After studying the evolution of the Lost Cause Myth and the propagation of the monuments it engendered, I felt compelled to visit the Lee Statue in its final days. Bearing witness to the imposing bronze work, I could understand what its creators had envisioned as well as the powerful sentiment behind its removal. With its landscaping torn up and the statue surrounded by temporary fences, it was clear that this was General Lee’s last stand. The City of Charlottesville was finally ready to confront the truth about its past. Two days later, the statue would be spirited away on a flatbed truck to some undisclosed location.

So, what should be done with the Lee statue? Clearly, it does not belong in a park or in any venue that seeks to glorify General Lee or the Southern cause. However, given the significant role it has played in one of the most important events in the modern history of American race relations, it certainly can still serve an educational purpose if this aspect of its history is properly emphasized in a different context. Perhaps the statue should find a home at the Museum of African American History and Culture? Having visited this wonderful museum, I believe the statue would serve as a powerful artifact highlighting the flawed story of the Lost Cause and the significance of the Charlottesville protests.