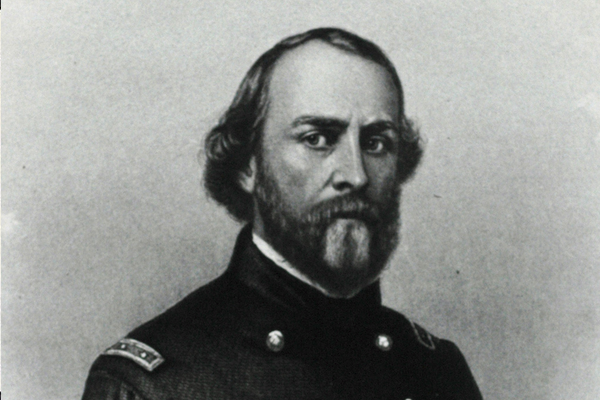 One hundred and sixty years ago, Major Sullivan Ballou of Rhode Island died of wounds sustained in the First Battle of Bull Run, Manassas, Virginia. Two weeks earlier he had written a very eloquent and heartfelt love letter to his wife, Sarah. The letter catapulted to national prominence when a segment of it was read in Ken Burns’ documentary, The Civil War, airing on PBS in 1990. Historians continue to debate its authorship.
Born in Smithfield, RI, Ballou was orphaned at an early age, filling his youth with need and poverty. Nonetheless, he eventually attended Brown University, earned a law degree from the National Law School, and practiced law in Providence.
In 1854, he was elected to the state House of Representatives. The following year he married Sarah Hart Shumway and came to treasure his wife and their two sons, Edgar and William.
With the beginning of the war in 1861, he heard the call of duty, volunteered, and was appointed a major in the 2nd RI Infantry Regiment.
His letters to Sarah had been affectionate, chatty with details about Army life, concerned with money and the health of the family members, and also at times charged with romantic longing.
In her book, “For Love and Liberty: The Untold Civil War Story of Major Sullivan Ballou and His Famous Love Letter,” Robin Young paints the setting when Ballou wrote the famous letter on July 14, 1861. His unit was located at Camp Clark on the outskirts of Washington, DC, preparing for action against “the Secesh” (rebel secessionists).
On the evening of July 14, he was surrounded by the sounds and sights of thousands of soldiers in camp, settling in for the evening: some inaudible distant talk, a cough, the ping of a tin cup, a snore, the lilt of a doleful tune from an harmonica.
Outside of his tent, the faint light from a quarter-moon shone. Scattered campfires and fireflies flickered.  Ballou uncapped his inkwell, prepared his pen, and began to write.
“My dear Sarah, The indications are very strong that we shall move in a few days …. Lest I should not be able to write again, I feel impelled to write a few lines which will fall under your eye when I shall be no more. Our movement may be one of a few days duration and full of pleasure—and it may be one of severe conflict and death to me. Not my will but thine O God be done. If it is necessary that I should fall on the battlefield for my country, I am ready. I have no misgivings about, or lack of confidence in the cause in which I am engaged, and my courage does not halt or falter. I know how strongly American Civilization now leans on the triumph of the Government and how great a debt we owe to those who went before us through the blood and sufferings of the Revolution. And I am willing … to lay down all my joys in this life, to help maintain this Government and to pay that debt.”
Several paragraphs later: “Sarah, my love for you is deathless, it seems to bind me with mighty cables that nothing but Omnipotence could break. And yet my love of Country comes over me like a strong wind and bears me irresistibly on with all those chains, to the battlefield.”
Several paragraphs later: “But O Sarah! If the dead can come back to this earth and flit unseen around those they loved, I shall always be near you …and if there be a soft breeze upon your cheek, it shall be my breath, or if the cool air fans your throbbing temple, it shall be my spirit passing by. Sarah, do not mourn me dead …for we shall meet again.”
Academics debate whether Ballou actually wrote the letter. Noting “tonal and linguistic discrepancies,” English Professor Stephen Cushman of the University of Virginia states that there is “no way the famed letter was penned by the same person who wrote the Ballou letters at the RI Historical Society….” (The original letter is lost.)
Also noting the differences in language and substance, Cornell University Professor Shirley Samuels states: “Where the famous letter came from, I cannot presume to say.”
Historian Robert Grandchamp also concludes that Ballou did not write the letter and points to Ballou’s friend, fellow officer, and gifted writer Horatio Rogers, Jr., suggesting he may have written it to console Ballou’s wife.
This exchange among academics is all well and good; the skepticism is justified. However, as I empathize with Ballou on that night, I am brought back to my own departure 40 years ago for my single “hardship/separation” tour of duty at the DMZ in Korea. As I was leaving my wife and three small children, my emotions—and perhaps my literary skills—were heightened, skills which I tried to employ in my letters and tapes sent home. This may have also been the case with Sullivan Ballou, who believed he was facing death.
Beyond this, my own interest is not with the authenticity of authorship of the letter, but rather with whether the sentiments expressed in it are noble, honorable, and true.

This essay was originally published by the Newport Daily News (RI) on July 28, 2021.