Recovering the Stories of Pioneering Frenchwomen of Science 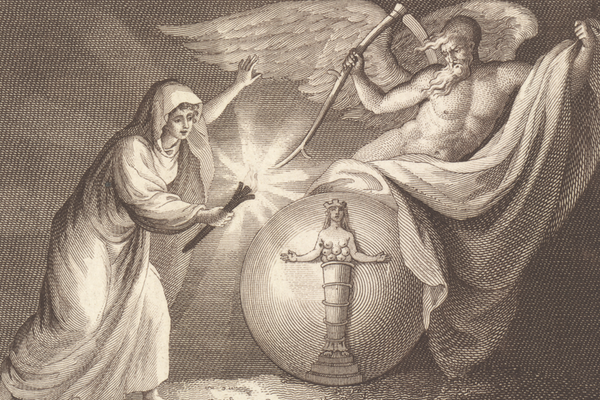 Science depicted as a woman in an 18th century engraving. Bodleian Libraries, Oxford

Women of science who did their work in the past are powerful examples for female scientists today, and for the push to encourage girls to enter, and women to stay, in the STEM fields. There is nothing close to parity between the sexes in these disciplines, a source of great concern in our present climate where advances in science and technology are critical for restoring the democracies of the world to global leadership. For too long, governments in the Western world have failed to support and recognize the extreme importance of scientific research, and hence have not provided anywhere close to the financial and moral support that they require. The consequence of this is the decline of our position on the world stage, and even more frighteningly the assault on facts that right now threatens any real progress in the pursuit of knowledge. Add to that the problem that the female half of humanity is denied the same uplifting and recognition in the STEM fields as their male counterparts, and we have a true crisis on our hands.

Why would any sensible government not recognize how essential it is to treat women equally, in every respect? But here I am arguing that this is especially essential to the survival and eventually to the thriving of the sciences. Women can and want to contribute, and they need all the inspiration and backing they can get. Only about 3% of Nobel prizes in science have ever gone to women, and that includes the uptick in female laureates in just the last few years.

Examples of intrepid women in the past who accomplished great things can only help in this effort, even if they lived centuries ago and in another country. Their stories demonstrate the perseverance necessary to study nature and further the understanding of its workings, when the conventions of the day required nothing more of them than that they marry, run an efficient household, and produce children, preferably an heir and even a spare. But a few women bucked the tide and found ways to excel beyond these confines, to nourish their intellectual ambitions and make valuable contributions to knowledge. They had no role models and so were themselves the pioneers. Their courage, grit and resoluteness in the face of obstacles were extraordinary.

I have devoted my career to writing the lives of such women in 18th century France, the country that gave birth to the Enlightenment. It might be argued that the first major figures of the Enlightenment were English, but this movement positively exploded in France from the early 1700s. The decadent Catholic French monarchy and its strict censorship of new ideas gave rise to resentment of traditional norms, and this in turn erupted into new demands for progress, for toleration, for the use of reason as the arbiter of truth, and for science. A true war on fanaticism had begun, encapsulated in Voltaire’s famous call to “Écrasez l’Infâme,” meaning “crush the loathsome thing,” in particular superstition and intolerance of all kinds. Voltaire’s partner, not accidentally, was Mme du Châtelet, a brilliant woman of science who translated Newton into French and presented an erudite commentary on his physics, in addition to doing original experiments of her own.

The Enlightenment was capped in 1789 by the French Revolution, with its stirring, unforgettable slogan “Liberté, Egalité, Fraternité.” Fraternity is all very well and good, but it is the part of this rallying cry that has always bothered me. Where were the women, what were they doing? They were surely there, but why was nobody talking about them? By adjusting our lens, we can find them.

My work has always attempted to bring to the fore some of their stories. My first book dealt with women journalists of the Enlightenment, especially those who edited a paper called, appropriately, Le Journal des Dames. Its first female director, Mme de Beaumer, wrote the following: “Let it be firmly resolved that women will henceforth be enlightened and intelligent…. Courage, women, no more timidity. Let us prove that we can think, speak, study, and criticize as well as [men]…. I await this revolution with impatience. I will do my utmost to be the first to precipitate it…. Men everywhere are being forced to recognize that Nature made the two sexes equal.” Yes, even in the 1700s radical feminists could be found. And she set the tone for her male colleagues to use the paper for opposition causes.

My second book, The King’s Midwife: A History and Mystery of Madame du Coudray, told of an astonishingly brave woman who was commissioned by Louis XV, and then re-commissioned by Louis XVI, to travel throughout the realm teaching the latest obstetrical practices, with the mandate to arrest infant mortality—nothing less! The royal administrators in all the provinces had to do her bidding so that she could accomplish her mission, which lasted several decades. She could, and did, report them to the king in Versailles if they made things difficult for her.

My new book, just out last month, Minerva’s French Sisters: Women of Science in Enlightenment France, presents the lives and work of a sextet who sought to elucidate the workings of Nature: mathematician and epistemologist Elisabeth Ferrand; astronomer and “learned calculator” Nicole Reine Lepaute; field naturalist Jeanne Barret; botanist and botanical illustrator Madeleine Françoise Basseporte; anatomist and inventor Marie-Marguerite Biheron; and chemist Geneviève Thiroux d’Arconville. One was a peasant, another a pharmacist’s daughter, yet another a grande dame of the aristocracy. But they shared a passion for science, and devoted decades of their lives in the pursuit of understanding the mind, the mechanics of the heavens, the flora of exotic places, the wonders of the human body, and the phenomenon of putrefaction, how living flesh decays, and what substances can arrest or delay this process.

Women today who aspire to do science still have an uphill battle, but as Marie Curie is believed to have said, “We must have perseverance and above all confidence in ourselves. We must believe that we are gifted for something, and that this thing, at whatever cost, must be attained.”