50 Years Later, the Pentagon Papers Remain an Historic Landmark for Freedom of the Press

Jared Schroeder is an associate professor of journalism at SMU Dallas where he specializes in the First Amendment and emerging technology. He is the author of The Press Clause and Digital Technology’s Fourth Wave. 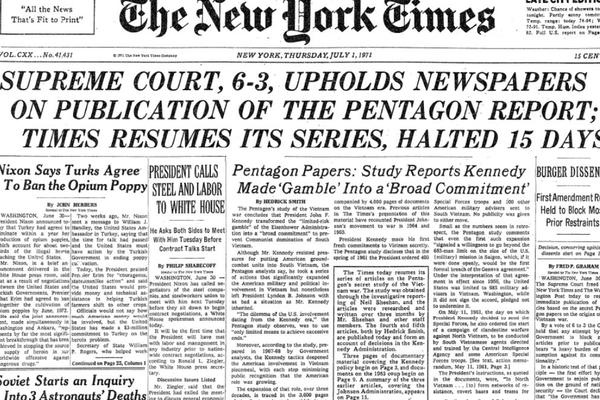 This week, we celebrate the 50th anniversary of a key part of freedom of the press which, like our democratic principles, survives as a hardened protection for publishers and remains unmoved by the unrelenting attacks our First Amendment freedoms face.

On June 30, 1971, the Supreme Court announced its decision in New York Times v. United States, also called the Pentagon Papers case. In its terse, one-page opinion, the Court concluded the government cannot censor or restrain the press. The First Amendment does not allow it.

Taking from a previous decision, the Court concluded, “Any system of prior restraints of expression comes to this Court bearing a heavy presumption against its constitutional validity.”

That presumption against government censorship has weathered half a century of turmoil, from a judge in Nebraska that barred journalists from covering a high-profile murder case to the Wikileaks scandal in 2010. The Pentagon Papers case affirms the government cannot stop the presses – or keyboards.

The rushed, 275-word decision takes up only a single page in the Court’s records, merely a cocktail napkin compared to justices’ 54-page decision from Citizens United v. Federal Elections Commission in 2010. A printout of the entire case, including emotional concurring opinions by Justices Hugo Black and William O Douglas, would take about 10 double-sided pieces of paper. Paper-thin, indeed.

Yet, at the half-century mark, the Pentagon Papers decision remains a solid wall against government censorship. It continues to represent a line that has not been crossed.

The outcome was far from certain in 1971. Daniel Ellsberg, a military analyst, leaked the classified Pentagon Papers, a history of the U.S. government’s involvement during the Vietnam War that was commissioned by the Department of Defense, to the New York Times’s Neil Sheehan in January, 1971. The story of how Sheehan acquired the papers, which he kept a secret until his death, rivals the plot of nearly any spy movie.

As the conflict continued in Vietnam, Sheehen and a growing number of Times reporters and editors read through the 7,000 pages of documents and deliberated about if or how to report the information. The Times published its first stories using the papers on June 13, reporting the government had been lying to Americans about its involvement in Vietnam for decades.

Attorney General John Mitchell demanded the Times stop publication, but the newspaper refused. A federal judge temporarily halted the Times from publishing using information from the stolen documents, but refused to compel the newspaper to turn the papers over to the government. By June 18, the Washington Post was publishing revelations from the classified papers, leading to a court injunction.

Justices decided to hear the case on June 25. During the oral argument, it became clear four justices strongly sided with the Times and Post, three sided with the government, and Justices Potter Stewart and Byron White were undecided. Justices William Brennan and Thurgood Marshall sought to have the case dismissed and the temporary restraints on publication vacated.

Justices heard the case on June 26 and went into conference that day. As they deliberated, they heard the government had obtained a restraining order against the St. Louis Post-Dispatch, halting it from publishing information from the Pentagon Papers. Justice Stewart concluded the government’s lawyers had failed to meet the burden needed to restrain the press. Justice White agreed, making it a 6-3 decision.

Justices took up the case and provided a written decision in a four-day period, a record pace compared to the years it often takes for a case to move through the court system to resolution by the Supreme Court.

Black, in his final First Amendment opinion before his death in September, 1971, lauded the press for realizing its purpose in a democracy by reporting vital information from the top-secret documents.

“Only a free and unrestrained press can effectively expose deception in government,” Black wrote. “And paramount among the responsibilities of a free press is the duty to prevent any part of the government from deceiving the people and sending them off to distant lands to die of foreign fevers and foreign shot and shell.”

The relatively short opinion has generally kept the government from halting publication for half a century. When the New York Times, as well as the Guardian and Der Spiegel, received stolen, classified government documents regarding U.S. wars in Iraq and Afghanistan from WikiLeaks in 2010, the government made no effort to stop the presses. Days of coverage in countless organizations scrutinized the often-embarrassing documents. Certainly, the government went after WikiLeaks founder Julian Assange, as well as the Army private who helped leak the documents, but no effort was made to halt publication.

Three years later, Edward Snowden, a subcontractor working for the NSA, leaked stolen documents about U.S. surveillance programs. Again, no effort was made to censor the news organizations.

The precedent stymied multiple attempts to halt publication during the Trump administration. A judge rejected Trump’s efforts to stop former national security adviser John Bolton’s book, The Room Where it Happened, from being published last June. Similarly, a New York judge rejected attempts to stop Mary Trump’s tell-all book, Too Much and Never Enough, from publication in July.

While democratic norms have, at times, seemed paper thin in recent years, the Court’s terse decision in the Pentagon Papers decision persists as a bulwark against government efforts to halt publication.