The Legacy of Same-Sex Love in Ancient Thebes

James Romm is the James H. Ottaway Jr. Professor of Classics at Bard College in Annandale, New York, and the author of The Sacred Band: Three Hundred Theban Lovers Fighting to Save Greek Freedom (Scribner). 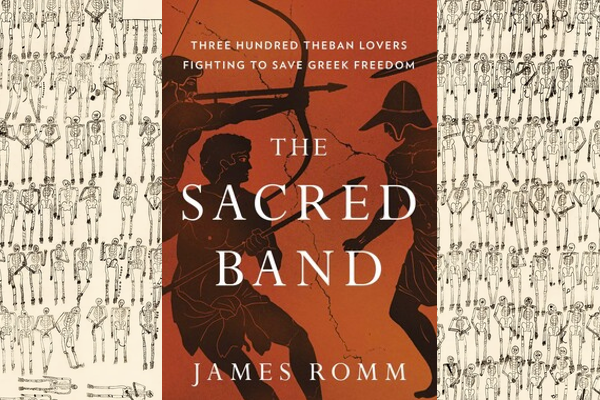 Among the many roads leading up to the Supreme Court’s 2015 decision on same-sex marriage, one of the more significant routes passes through Boeotia in central Greece.  This region, and its principal city, Thebes, established a precedent for male same-sex unions that deeply impressed the ancient Greek world as well as gay rights pioneers in nineteenth-century England and the U.S.

The story is little known compared with, say, that of the poetess Sappho of Lesbos, whose homoerotic verses have made the name of her home island, in adjective form, a virtual synonym for female same-sex love.  The Thebans wrote little compared with other Greeks, and those who wrote about them were often biased against them.  But traces survive of their uniquely gay-friendly culture, including a set of archaeological sketches made in 1880 but brought to light only very recently.

The long trail begins not with a Theban but with a Corinthian, a wealthy aristocrat named Philolaus.  Sometime in the 8th century BC this man left Corinth with his male lover, an Olympic athlete named Diocles, and landed in Thebes.  The pair were fleeing the incestuous passion of Diocles’ mother – a drama worthy of Sophocles, one supposes, but Aristotle, the source for their flight, gives no details.

Committed male couples, willing to go into exile together, were as yet uncommon in ancient Greece.  Homoerotic affairs were more typically short-lived, ending when the junior partner – who may have been pre-pubescent at the outset – began to grow facial hair.  That is the model described by Plato’s speakers in the dialogue Symposium, one of our fullest sources for ancient sexual mores.  But Philolaus and Diocles were both mature men.

Did this pair go to Thebes because they knew that their bond would be welcomed there?  Or did their arrival help make Thebes a more gay-positive place?  Aristotle says that Philolaus crafted laws for the Thebans, and other writers make clear that those laws gave special support to male unions.  It’s the first we hear, in any Greek city, of a legislative program designed to encourage same-sex pair bonding; some other Greek law codes explicitly discouraged it.

Fast-forward to the 4th century BC, where evidence of Theban uniqueness is more widespread.  In Athens, observers like Xenophon noted that male lovers among the Boeotians (the ethnic group that included the Thebans) lived together “as yoke-mates,” a metaphor usually used of heterosexual marriage.  Aristotle, in a work now lost but cited by Plutarch, described how Theban male couples swore vows of fidelity to one another beside the tombs of Heracles and Iolaus, a mythic pair of heroes assumed by most Greeks to have also been sexual partners,

By far the most significant evidence of same-sex bonding among Theban adults is the legendary Sacred Band, described by Plutarch (himself a Boeotian) in his work Parallel Lives.  This infantry regiment was formed from 150 male couples, of which both partners were clearly above the age of military service.  The Thebans established this corps in 378 BC in response to Spartan aggression, and with its help they defeated the Spartans in open battle only seven years later.

The effectiveness of the Band, says Plutarch, was based on the way that two lovers, fighting side by side, would strive to impress one another with prowess and courage.  It’s just the same reason a pair of chariot horses run faster than any one horse, says Plutarch (who seems to know this for a fact).  Plato makes a related point in Symposium, discussing a hypothetical army of lovers: No one, he says, would want his beloved to see him turn and run in the face of danger.

The tomb of the Sacred Band was unearthed at just the moment, in the late nineteenth century, that gay men, in Europe and the U.S., were first coming out of the closet.  Walt Whitman wrote in Leaves of Grass of a city where “manly love” flourished, seemingly inspired by Plutarch’s account of Thebes.  In England, the classical scholar and essayist J.A. Symonds wrote an impassioned defense of Greek male homosexual culture, including that of Thebes, in his seminal pamphlet “A Problem in Greek Ethics.”

The work of both Symonds and Whitman influenced George Cecil Ives, a gay Victorian man and a friend of Oscar Wilde, to make the Sacred Band his emblem of gay male pride.  He formed a secret society, the Order of Chaeronea, to provide a forum for closeted homosexuals and to work toward a more inclusive society.  The voluminous diary he kept during the late 19th and early 20th century is today considered a vital source for the start of the gay rights movement.

Ives became so entranced with the Sacred Band that he began dating his diary entries according to the years elapsed from 338 BC, the date of the Battle of Chaeronea.  He thought the new age of the world had begun not with the birth of Christ but with the destruction of the Sacred Band by Alexander the Great.  The extinction of the Band, in his eyes, had marked a great fall from grace, the end of an era when gay men like himself could live a life unimpeded by condemnation.

Ives was optimistic that the golden age that ended at Chaeronea could someday return.  “I believe that Liberty is coming,” he wrote in his diary in 1893.  “I sometimes think that some of us will live to see the victory.”  How gratified he would have been by the legalization of same-sex marriage and other kinds of “victory” for inclusion -- milestones attained with the help, in some small part, of Thebes and its Sacred Band.