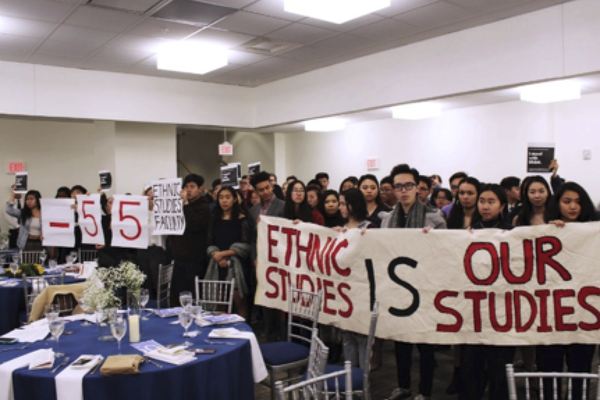 When the California State Board of Education adopted on March 18 a “model curriculum” for an ethnic studies course for high school students, conservative critics were quick to pounce. They alleged the new curriculum would be “filled with hate for America,” “label all whites as racists,” and promote group conflict.

A Wall Street Journal editorial  charged that “California’s proposed Marxist narratives are designed to encourage intergroup conflict and perpetual upheaval in existing institutions… Ethnic studies wants to invert traditional American ideas of individual merit, opportunity and success. It imposes (a) dominant narrative that interprets all social interactions through the lens of oppression...”

Could this be true?

First of all, it is important to note that the new document is not a specific week-by-week curriculum, but rather a set of guidelines and suggestions. The 200-page package includes suggested lesson plans, instructional approaches, goals, a bibliography and a list of existing high school ethnic studies courses that meet college requirements.

The new curriculum is not mandatory. It is up to the state’s 1,100 local school districts to decide which portions, if any, to require for their students.

In 2020, the Los Angeles Unified School Districts, which enrolls 650,000 students, the vast majority of them students of color, voted to make ethnic studies a graduation requirement in the 2023-24 school year. A half-dozen other urban school districts have recently discussed requiring such some form of ethnic studies course for their students.

The model curriculum defines the field of ethnic studies as “the interdisciplinary study of race, ethnicity, and indigeneity with an emphasis on experiences of people of color in the United States.”

According to Theresa Montaño, a professor of Chicana/Chicano studies at Cal State Northridge and a member of an advisory committee that created the curriculum, “Ethnic Studies is the opportunity to give one course to the 80% of California students who have begged for inclusion of their histories and their stories in the California curriculum.”

Will a classroom discussion of slavery, Jim Crow policies and anti-immigrant laws create divisions among students of different backgrounds?

Ethan Kytle, a professor of history at California State University Fresno, said his experience in teaching about these subjects is that a “frank discussion of these issues creates empathy and informed citizenship.”

Kytle is the author of Romantic Reformers and the Antislavery Struggle in the Civil War Era and the co-author, with Blain Roberts, of Demark Vesey’s Garden: Slavery and Memory in the Cradle of the Confederacy. He calls the issues of slavery, reconstruction and the imposition of Jim Crow laws “the tough stuff of American memory.”

But in twenty years of teaching he has never had a student who wanted to avoid confronting them. In fact, most students find the topics “endlessly fascinating and vitally important.”

Kytle said his students “know that getting a complete picture of our past—one that confronts the good, the bad, and the ugly—helps them better understand who we are and how we got here.”

Seven states are currently considering requiring a course in ethnic studies for K-12 students.  A flash point has been the use of critical race theory, a concept denounced by many Republican legislators as a “Marxist narrative” that denigrates American values and “teaches hate.”

The term critical race theory originated in the 1980s as an academic theory to explain exclusionary zoning and government-sanctioned discriminatory mortgage regulations. It has evolved and is now applied more broadly to describe explicit and implicit racism throughout American society.

Advocates of critical race theory say that teaching ethnic studies without using it as a lens, renders the subject meaningless. Without critical race theory, they state, there is no critical analysis of the systems of power and the experiences of the marginalized groups in our society.

Critics, including some veteran high school teachers, counter that it is a blunt instrument that can harm white students if they are told that they have privileges based on race that make them oppressors over other people.

In September 2020, then President Donald Trump declared war against “race-based ideologies,” his code for theories and practices that examine the racism in American institutions. The Trump Administration’s Office of Management and Budget (OMB) instructed federal agencies to identify any critical race theory and white privilege training within their departmental training plans. According to the memo, the administration’s mission is to stop funding any programming that suggests the “United States is an inherently racist or evil country or that any race or ethnicity is inherently racist or evil.”

The Biden Administration on January 20 cancelled the ban, allowing diversity training to go-ahead. In remarks announcing his decision, Biden said “Unity and healing must begin with understanding and truth, not ignorance and lies.”

The California model curriculum does not require the use of critical race theory framework. Instead it sidesteps the issue by simply offering a definition of the term from the American Bar Association.

The ABA definition includes these points:

Perhaps the last point, the importance of including the stories of America’s racial and ethnic minorities in school history lessons, is one that few can dispute.

Ronald Takaki, an emeritus professor of Ethnic Studies at U.C. Berkeley, is the author of  A Different Mirror: A History of Multicultural America, which is often used as a textbook in high school and college courses.

In his book he states that race and ethnicity should be “studied inclusively and comparatively.” Throughout the 20th century, Takaki notes, most high school textbooks were “white-centered” and overlooked the achievements of “the indigenous people of the continent and also the ‘uprooted’ from Africa, Asia and Latin America.”

This is damaging to students of color, he warned. “What happens when someone with the authority of a teacher describes our society and you are not in it? Such an experience can be disorienting. . . as if you looked into a mirror and saw nothing.”