Remembering the Father of Vaccination 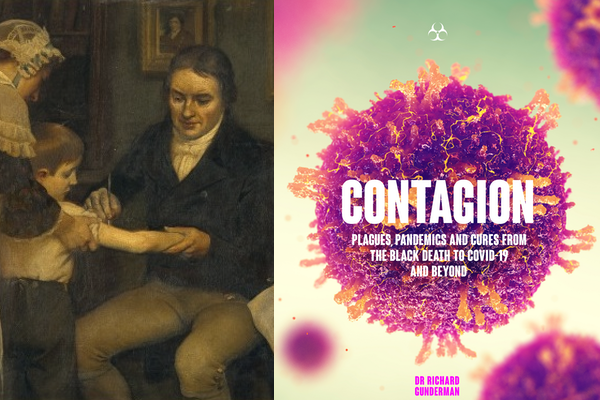 As the US COVID-19 vaccination program reaches full stride, approaching 2 million shots per day, the time is ripe to recall the contributions of the physician-scientist who first put vaccines on the map, Edward Jenner.  Some claim that Jenner saved the lives of more people than any other figure in history, yet his contributions are often poorly understood.

Jenner did not invent inoculation

Born in England in 1749, Jenner was inoculated as a child against smallpox, a dread disease that appears to have scarred 3,000-year-old Egyptian mummies.  Caused by the Variola virus, the disease manifested as fever and the development of a blistering skin rash referred to as pox.  It is thought that about 30% of infected people died of the disease, especially infants and young children.

In Jenner’s day, inoculation was by variolation.  The skin was scratched and the smallpox scabs or fluid from an infected person were rubbed into it.  When it worked appropriately, this would cause the variolated individual to develop a mild case of smallpox which usually lasted several weeks, after which the patient would be immune.  But small percentages of variolated individuals died.

The technique had been popularized by Lady Mary Wortley Montagu, who both lost her brother to the disease and suffered severe facial scarring herself.  While traveling in Turkey, she witnessed variolation, and in 1718 she had it performed on her young son.  By the time Jenner was born, variolation had become been widely incorporated into English medicine.

Jenner was not the first to suspect that prior infection with cowpox provided immunity against smallpox.  At least five physicians had tested cowpox, and even a farmer named Benjamin Jesty had used cowpox to vaccinate his wife and children during a smallpox epidemic.  Jenner, however, was the first to study vaccination in a scientifically rigorous way.

Knowing that milkmaids were generally immune to smallpox, Jenner hypothesized that the pustules on the hands of milkmaids could be used to confer immunity.  In 1796, he tested the idea by inoculating James Phipps, the 8-year-old son of his gardener.  He scraped material from the hands of Sarah Nelmes, a milkmaid with smallpox, and inoculated Phipps in both arms.

After several weeks, he variolated Phipps.  Although the boy did develop a mild fever, he did not develop full-blown smallpox.  After a time, Jenner variolated him again, with no effect.  The procedure had apparently conferred immunity.  We now know that the viruses that cause cowpox and smallpox are sufficiently similar that the immune response to one can confer immunity to the other.

Today we talk easily of viruses, but in Jenner’s day they were completely unknown.  The great microscopist Antony van Leeuwenhoek had discovered bacteria around 1676, but viruses are far too small to be seen through light microscopes.  It was not until the invention of the electron microscope in 1931 that viruses were visualized for the first time.

Unanswered questions about the mechanism of vaccination led the Royal Society not to publish Jenner’s first manuscript, but after he conducted other trials, including one on his infant son, his paper was published.  Perhaps his greatest contribution was his insistence on challenging those who had received the cowpox inoculation with smallpox to prove they were immune.

The term vaccination betrays its origin.  Vacca is Latin for cow, the source of the cowpox material that Jenner and others used to inoculate against smallpox.  Some decades before Jenner’s work, US founding father Ben Franklin decided not to variolate his young son Francis, a decision he regretted the rest of his life because the boy died of the disease at age 4 in 1736.

Jenner’s legacy exceeded even his own dreams

Smallpox vaccination quickly spread around the world.  Spanish expeditions carried it to far-flung lands such as America and China.  Napoleon had his troops vaccinated.  Jenner received a host of domestic and foreign honors.  To allow him to focus his attention on his investigations, Parliament awarded him huge grants of 10,000 and 20,000 pounds.

But Jenner could not have anticipated where his work would lead.  Immunization by cowpox held sway until the 19th century, when a more modern live-virus vaccine was developed using the lymph of calves.  Today versions of smallpox vaccine are available that do not use live viruses and thus cannot cause disease.

Yet no one is being immunized against smallpox today, because of a worldwide immunization program that led the World Health Organization to declare the disease eradicated in 1980.  US vaccination ceased in 1972, though many older adults still bear scars.  Today the smallpox virus is found only in a few secure laboratories, where it is used to prepare against the use of smallpox as a bioweapon.

Jenner died of a stroke in 1823 at the age of 73.  He continued his scientific investigations until the end, presenting a paper on bird migration to the Royal Society in the year of his death.  Whether or not Jenner truly saved more lives than any other person, there is no doubt that his pioneering work on immunization laid the groundwork for today’s most effective tool against COVID-19, the vaccine.