Biden Supports Amazon Workers' Right to Form a Union. Is this a Turn Back to Pro-Worker Policy?

Martin Halpern is Professor of History Emeritus at Henderson State University and the author UAW Politics in the Cold War Era and Unions, Radicals and Democratic Presidents: Seeking Social Change in the Twentieth Century. 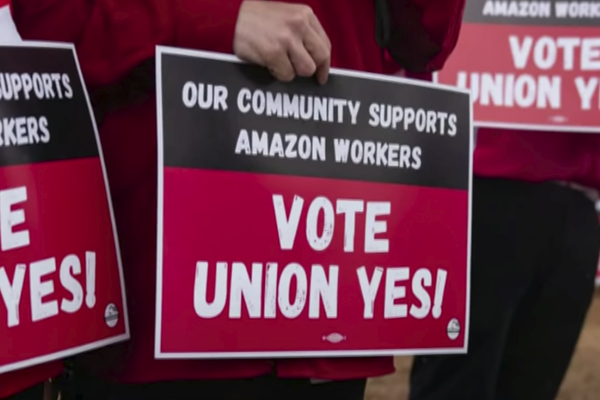 The campaign of Amazon workers in Alabama to win representation by the Retail, Wholesale, and Department Store Union (RWDSU) may be a critical turning point in reversing a forty-four- year trend. Since 1978, the corporations and the wealthy elite have accumulated more and more power while the living standards, rights, and power of the U.S. majority have declined. The Amazon union drive points the way to improving workers’ lives and reduces the glaring inequality in the U.S.

As innovative as Amazon has been in many respects, it’s been old-fashioned in its abuse of workers’ safety on the job, its low-wage strategy, its anti-unionism, and its flexing of its monopolistic muscle against competitors. The need to change direction in the U.S. has become more compelling as a result of Amazon’s growing power and the harm done to workers’ health and their well-being in the COVID crisis as a result of their relative powerlessness.

Users of the Amazon website can support Amazon workers by speaking out, signing petitions, writing letters, and taking other actions to show opposition to its anti-union policies. The election of Bessemer, Alabama warehouse workers is now underway and concludes on March 29. It’s time to send the company a message that however much we appreciate what it has to offer, we insist that it refrain from its oppressive and anti-democratic practices toward the workers who do the work that is the source of its wealth. During the current COVID crisis, Amazon workers should be receiving hazard pay and have their health protected, not bombarded with anti-union propaganda.

The RWDSU drive at an Amazon warehouse in Bessemer, Alabama is part of the grass roots movement of low-wage workers in the retail, fast food, hotel, ride-share, nursing home, food processing, and textile industries, and in private home care. It is part of the rank-and-file upsurge for the $15 per hour minimum wage, for health protection for front-line workers, for protecting women workers from sexual harassment and providing full coverage for reproductive health, and for equality in the workplace. It is backed by unions and by independent workers’ centers. Many activists are radical visionaries unafraid of the red-baiting of employers and the political right.

Whether the Bessemer election is won or lost, it is part of a campaign to change the country’s labor law so that the institutional weight of government supports unionization as a means to promote grass roots democracy and increase the purchasing power of the masses.

The 1935 Wagner Act created the framework of a pro-union role for the federal government, of “encouraging the practice and procedure of collective bargaining,” protecting “freedom of association, self- organization, and designation of representatives of their own choosing,” and “negotiating the terms and conditions of their employment or other mutual aid or protection.” The law forbade as unfair labor practices any action by employers “to interfere with, restrain, or coerce employees” in the exercise of their rights.

This pro-labor framework was weakened by the Taft-Hartley Act of 1947 and by pro-employer court decisions, but the Wagner Act ideals are still law. While employers initiated new tactics that further chipped away at labor rights, unions and their allies are today seeking enactment of the Protecting the Right to Organize Act, their sixth attempt to fully reestablish a pro-union federal policy.

An effective alliance between a Democratic president and liberal members of Congress is of central importance. The Wagner Act resulted from a combination of grass roots, left-influenced workers’ movements, support from President Franklin Roosevelt, and leadership in Congress from liberal Democrats and representatives from the American Labor Party of New York, the Farmer Labor Party of Minnesota, and the Progressive Party of Wisconsin. Similarly, the gains by public workers in the 1960s and 1970s began with their own grass roots, left-influenced movements in federal, state, and local governments. Support came from the labor movement and President John F. Kennedy’s Executive Order 10988 establishing limited collective bargaining for federal workers. Strikes by Memphis African-American sanitation workers in 1968, and, then in 1970 by postal workers across the country, two-thirds of whom were African Americans, helped consolidate the position of public worker unions in the U.S. economy.

Neither Roosevelt nor Kennedy had a perfect pro-labor record, but both gave crucial assistance to unions. Roosevelt stopped an effort to gut the Wagner Act, passed by the House of Representatives, from becoming law in 1940. Kennedy followed up his initial executive order with a second order establishing a check off of union dues for federal unions.

The record of subsequent Democratic presidents has included the appointment of pro-union members to the National Labor Relations Board. However, from 1949 until today, efforts to reform the nation’s labor law have fallen short. Presidents Jimmy Carter, Bill Clinton, and Barack Obama all failed to offer the assistance needed to pass pro-union legislation. An additional factor was the use of the filibuster in the Senate to defeat reforms in 1965, 1978, and 1994. Although unions have been a crucial factor in Democratic election victories, it has been decades since they have reaped a labor law victory. The result has been a continuous decline in union density -- the percentage of workers belonging to unions -- since the early 1950s and an escalating growth of inequality since 1978.

The presidency of Joe Biden represents an opportunity for the alliance of unions and a Democratic president to come to the aid of workers seeking more income, a greater say in their workplaces, and improved health and security. Supporting Amazon workers as they cast ballots in a union representation election, as President Biden has done, is a first step. All of the anti-union intimidating practices that Amazon is using in this campaign should be illegal. The principle needs to be restored that deciding on whether to join a union is the decision of workers, a decision in which employers should have no part. A second step will be eliminating the Senate filibuster so that labor law reform can at last be enacted.  A third step is passing the Protecting the Right to Organize Act and then more comprehensive labor law reform.

Support for unionization should come from progressive movements for peace, reproductive rights, environmental justice, race and sex equality, defunding the police, LGBTQ rights, Medicare for all, jobs for all, food security, and consumer safety.  Workers and their unions are the heart of the broad movement for progressive change in the United States. The moment has come for progressive organizations to rally around Amazon workers and support their campaign for economic justice.