The Return of Human Rights on the American Agenda?

Richard Moe was chief of staff to Vice President Walter Mondale and assistant to President Jimmy Carter 1977-1981. He is the author, most recently, of Roosevelt’s Second Act – The Election of 1940 and the Politics of War. 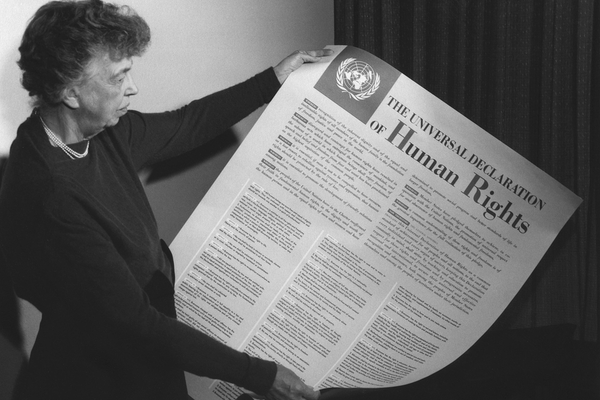 Almost lost in the flurry of activity flowing from the new Biden Administration, the issue of human rights has been thrust center stage. After a four-year absence from the U.S. agenda, the Biden team announced Tuesday a new set of sanctions against senior Russian officials for the attempted poisoning of Alexei Navalny, the highly charismatic and effective political activist who is leading protests against Russian corruption and autocracy.

With his rallies running into the tens of thousands, many believe Navalny poses the greatest threat in years to the stability of Russian President Vladimir Putin ‘s regime. The fact that he was sentenced to two and a half years in prison for alleged “parole violations” shows that officials high in Putin’s government see that threat similarly. The new U.S. move also called for the immediate release of Navalny from prison.

During his first full week in office, President Biden raised the issue with Putin in their initial conversation. While it’s not known precisely what Biden said, the important fact is that he raised it at all in a discussion that included such weighty issues as extension of a critical nuclear treaty, Russian hacking of government and private computer networks (“Solar Winds”), and interference in our 2020 elections. One can only conclude Biden was very forceful in conveying to Putin that it’s a new day in U.S.-Russia relations, and that human rights are again high on the list.

Biden’s quick response is no surprise; he has embraced the cause of human rights throughout his long public career. It is particularly timely now because it follows a four-year drought of any serious U.S. effort to advocate abroad for the fundamental values that most recent presidents of both parties have voiced in one way or another. Its absence is one of many value norms the previous administration failed to continue, protesting neither Russia’s attempted poisoning of Navalny nor Saudi Arabia’s assassination of an American-based journalist in Turkey.

In his Inaugural address, President Biden thanked three of his predecessors for attending and mentioned that the evening before he had called the only other living former president, Jimmy Carter who, at age 96 was unable to make it; he nonetheless saluted him “for his lifetime of service.” I believe there is a special affinity between Joe Biden and Jimmy Carter, one that began 45 years ago when a young man from Delaware became the first U.S. senator to endorse an obscure former governor of Georgia in his long-shot campaign for the presidency. In his 2010 “White House Diaries,” Carter cited Biden as “my most effective supporter during the 1976 campaign;” that’s the kind of affinity in politics that only grows stronger over time.

I once asked Carter -- whose presidency was arguably stronger and more consistently focused on the issue than any other -- where his commitment to human rights came from. He said it sprang from what he described as the “explicit idea” underlying the nation’s founding, his deeply rooted Christian faith, and the experience of growing up where the vast majority of his neighbors were African Americans.

Joe Biden too has a deeply rooted faith; it’s apparent also that his whole being has been affected by his profound personal losses.  Whatever the source, Biden has been a consistent a vocal supporter of human rights from his earliest days in the Senate. No one should doubt that support will remain strong during his presidency, as evidenced by his recent sanctioning of military leaders for their coup in Myanmar.

The parallels between these two presidents on human rights are almost uncanny. Just as Biden begins his presidency with a major Russian human rights issue on his plate, so too did Carter more than four decades earlier. On January 20, 1977, he signaled in his Inaugural address a strong commitment to human rights: “Because we are free, we can never be indifferent to the fate of freedom when our moral sense dictates a clear-cut preference for those societies which share an abiding respect for human rights,” adding in case anyone missed the point, “. . . Our commitment to human rights must be absolute.”

The next day Carter received a letter from Andrei Sakharov, a highly regarded Russian Physicist who had won a Nobel Peace Prize for his human rights activism, asking Carter to join the struggle for the cause in the Soviet Union. President Carter responded immediately in a way that both encouraged dissidents to continue their efforts and helped cement the term “human rights” into the international lexicon.

President Biden is dealing with a situation that is very different from Carter’s experience with Sakharov. Navalny is running a much more sophisticated and effective campaign than Sakharov was able to, with at least 40 offices throughout Russia, the use of social media and other technologies that keep them several steps ahead of the Russians.  As Navalny courageously returned to Russia knowing he would be arrested and likely imprisoned, his team used the moment to release videos of Putin’s plush “billion-dollar mansion” on the Black Sea, catching Russian officials off-guard and allowing his compatriots to organize rallies in 100+ cities across Russia. His savvy aides have also urged the Americans to work closely with the Europeans to maximize the effect of sanctions, which they hope will be directed to the oligarchs close to Putin, so that they will be felt where it hurts most.

Tuesday’s new sanctions put the U.S. in essentially the same place as the Europeans. Administration officials hinted that other punitive measures may follow to address other events such as the Solar Winds hacking scheme, interference in the 2020 elections, and other human rights violations. Secretary of State Antony Blinkin said the sanctions were intended to “send a clear signal that Russia’s use of chemical weapons and abuse of human rights have severe consequences.”

While these sanctions did not affect the oligarchs or Putin, their focus on lesser but still important officials points out why human rights have almost always been a conundrum: They are often mixed in a stew of other concerns when policy-makers are forming a comprehensive foreign policy and are seen by some as an irritant or worse by others across the table. Diplomats are not hesitant to argue that pressing human rights can impede progress on what they see as more important issues, usually those of a geopolitical nature. It’s a tension that goes back a while, and it’s evident in President Biden’s recent sanctions of officials in both Russia and Saudi Arabia; the tension is inherent in the practice of human rights diplomacy,  and will likely remain there for the foreseeable future.

Inevitably, critics of an American human rights effort will argue that we don’t have clean hands or “standing” when it comes to the subject. How can we urge others how to behave when the United States has within itself such contradictions as centuries of racial injustice and the attempted eradication and subsequent abuse and neglect of indigenous Americans? President Carter addressed that question in 1977 when he told a United Nations audience that though the United States hadn’t always lived up to its ideals, it nonetheless “has a historical birthright to be associated with human rights.”

Franklin D. Roosevelt said even earlier, “The presidency is preeminently a place of moral leadership.” Although FDR likely had dealing with the Great Depression in mind, we should be glad that both Jimmy Carter and Joe Biden took heed from the broader meaning of Roosevelt’s admonition and this president is prepared to face these new human rights violations, perhaps in conjunction with election interference, Solar Winds and other matters.  If so, the result could be an unprecedented set of measures that impose serious consequences for the Russians who are responsible.