Twenty Years Ago, Rioters Tried to Stop a Presidential Vote Count – and Succeeded

Robert Brent Toplin has published several books and articles on history, politics, and film. His website is www.presentandpast.com 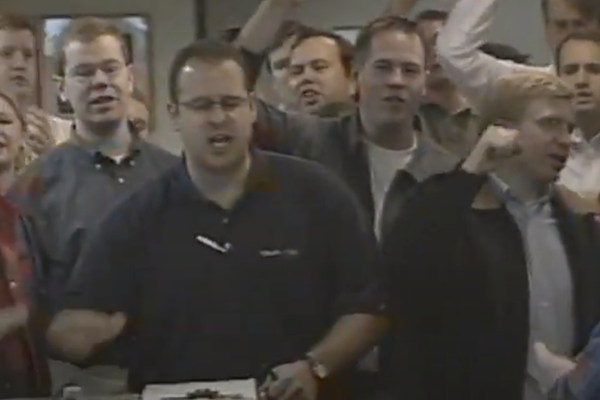 Protesters Demand Entry to the Miami-Dade County Canvassing Board, November 22, 2000.

On January 6, 2021 a violent mob invaded the U.S. Capitol. Believing Donald Trump deserved the presidency, rioters tried to prevent certification of Joe Biden’s victory in the Electoral College. Their vicious attack failed. Twenty years earlier, a group of rioters succeeded in stopping a vote count and influencing the outcome of a presidential election. In 2000 Democratic candidate Al Gore had half a million more popular votes than George W. Bush and probably would have finished with more electoral votes as well if rioters had not stopped a ballot count in Florida. Through physical intimidation, a few dozen partisans in the “Brooks Brothers Riot” achieved what thousands of rioters at the U.S. Capitol failed to do: secure the presidency for their candidate.

Shortly after the November 7, 2000 election, it became evident that Florida’s 25 electoral votes would determine the outcome. Bush’s lead in the state disintegrated over days of recounts. It dropped from 1784 to 327 and then to 154. Attention focused on Miami-Dade County, a Democratic stronghold. A recount of thousands of ballots there seemed likely to produce large gains for Gore. On November 22, Miami-Dade’s canvassing board was rushing to complete its work before a November 26 deadline.

Strategists for George W. Bush’s campaign panicked. Their candidate appeared close to losing the election. Quickly, James Baker, George W. Bush’s chief legal adviser, reacted. He spoke frequently to the media, insisting Bush won. Baker claimed any further counting would produce “mischief.” Privately, he recognized a predicament. In a conversation with team members, Baker acknowledged, “We’re getting killed on ‘count all the votes’ . . . Who the hell could be against that?”

One of the key players in Republican efforts to block Miami-Dade’s recount was Roger Stone, Richard Nixon’s “dirty trickster” and an associate of Donald Trump. Stone recruited Cuban-American protesters through warnings on the radio that Gore planned to stage a coup like Fidel Castro attempted in Cuba. Stone also organized phone banks that encouraged Miami Republicans to storm the downtown counting site. On the day of the rioting, he operated a command center from a Winnebago parked nearby.

Other organizers arranged to fly Republican lawyers and staffers to Miami from Washington, D.C. in flights provided by the Enron and Halliburton corporations. Enron later disintegrated in scandal. Dick Cheney, CEO at Halliburton until the summer of 2000, became Vice President in the Bush administration.

The event that stopped vote counting in Miami-Dade became known as the “Brooks Brothers Riot” because the white protesters were well-dressed in button-down shirts and sport jackets. Several “rioters” appeared outside the room where counting was taking place. Screaming, “Stop the count! Stop the Fraud!” they pounded on doors and demanded, “Let us in!”

The county’s Democratic Party co-chairman, Joe Geller, was at the scene during the melee. When he procured an Official Democratic Party Training Ballot, protesters accused him of stealing a voter’s ballot. They kicked and jabbed him. Geller later reported, “At one point I thought if they knocked me over, I could have literally got stomped to death.” He escaped in an elevator, where several protesters quietly joined him. When the elevator doors opened, revealing television cameramen in the lobby, protesters screamed about voter fraud. They performed on-time for the national media.

The Brooks Brothers Riot left three canvassing board members fearful about intimidation and concerned about negative publicity. They decided to cancel the recount.

Leaders from both sides later acknowledged the “riot” played a decisive role in producing Bush’s victory. Others disagree, noting that a Republican majority in the Florida legislature was planning an unprecedented effort to award all of Florida’s electoral votes to Bush, if they were needed. Also, the U.S. Supreme Court took unprecedented action. A controversial interpretation by the Court’s conservative majority stopped the recount and gave Bush a 537-vote win in Florida. If three more days of counting in Miami-Dade had produced a substantial lead for Gore, as expected, Florida’s Republican legislators and conservatives on the Supreme Court would have found it extremely difficult to reverse the voters’ choice.

The events of November 22, 2000 made an impact. Al Gore, who had been at the forefront of publicizing climate change, could have provided a powerful voice for action as president of the United States. George W. Bush entered the Oval Office, instead. Bush and his advisers eventually led the nation into a disastrous invasion and occupation of Iraq. When Hurricane Katrina struck, Bush and his FEMA director, previously a commissioner of the International Arabian Horse Association, responded ineptly. Their flawed leadership in an emergency contributed to the suffering of many citizens.

The Brooks Brothers Riot was a significant event. It had long-term consequences for U.S. and global history.