Racist Zoombombings the Latest Application of Technology by White Supremacists

Roy E. Finkenbine is Professor of History and Director of the Black Abolitionist Archive, University of Detroit Mercy. 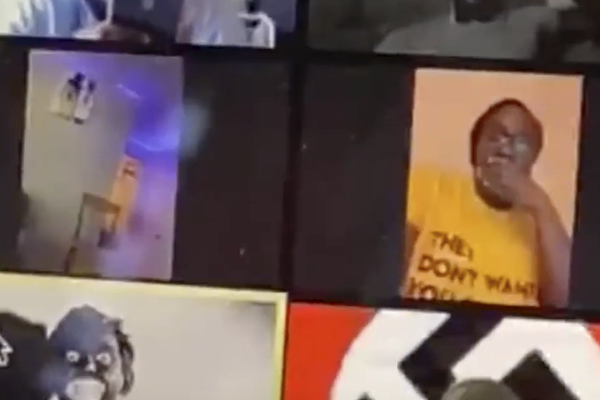 White supremacist keyboard warriors appear to have declared a cyber war against Black History Month. Virtual events across the land have been Zoombombed by these perpetrators.  I know about these attacks from firsthand experience; an event that I led was one of those victimized.

Black History Month events sponsored by universities are among the most frequent targets.  Those attacked include Penn State, Rutgers, Rider University, the New Jersey Institute of Technology, the University of South Florida, Seattle University, Wyoming, Salt Lake Community College, Del Mar College, my own University of Detroit Mercy, and many more.  Some institutions report strikes on multiple events.  My students have heard of similar assaults at other institutions that have not yet been reported by the media.  There are commonalities to the attacks, including racial slurs appearing on screen, racist and homophobic images (some drawn by hand on the screen), and racist remarks in chatrooms.  At Rutgers, the culprits inserted pictures of black bodies, some hanging, and others covered in blood.  Meanwhile a Ku Klux Klan song played on a continuous loop, stating “kill all blacks/we will find you.”

These institutions are conducting investigations of the attacks, either with local law enforcement or with the FBI.  Although the wrongdoers have yet to be identified, they seem to have come from outside the universities and community colleges being targeted and they seem to be coordinated.  The heaviest day of Zoombombings took place on February 15, including the one that occurred at the University of Wyoming.  According to the Laramie Boomerang: “evidence suggests the individual(s) responsible for Monday’s attack may also be connected to similar attacks that have occurred during other university-hosted virtual Black History Month programs across the nation.”  One investigation hints that these coordinated strikes may have originated in the eastern United States.

Other entities have suffered similar attacks.  Zoombombers interrupted the virtual reading of a Black History Month proclamation by the Lawrence (Kansas) City Commission with images of sexual abuse and a racist message.

My own experience with this phenomenon came on February 15 during a Black History Month event at my university titled “Love Stories from the Underground Railroad.”  This annual event brings together the celebrations of Black History Month and Valentine’s Day to share the stories of enslaved couples who ran away together to find freedom in the northern states or Canada.  This February, I told the story of freedom seekers William and Louisa Swan, who fled to northern Michigan and settled under the protective gaze of the Odawa and Ojibwe peoples there.  About forty minutes into my presentation, twelve new participants abruptly joined the Zoom session.  Within seconds, the N-word appeared superimposed in red over one of my PowerPoint slides.  When the session host removed the racist language, a pornographic video emerged.  After those disturbing images were eliminated, the twelve perpetrators hijacked the Chat function to serially post racist and anti-Semitic remarks, each of which popped up momentarily on the computer screen.  We were forced to abbreviate the event rather than further compromise and offend our other participants, which included our students, faculty, and staff, a class from another college, a few historians at other institutions, and community guests.  A video of a dramatic reading of one of Louisa Swan’s letters by two African American actresses in our Theatre Company – the product of much hard work – became part of the content jettisoned.

What happened to American universities during this Black History Month is already being recognized by academics as a distinct form of racial violence.  This is the argument made by University of Michigan scholars Lisa Nakamura, Hanah Stiverson, and Kyle Lindsay in their forthcoming book Racist Zoombombing from Routledge.  Although some may see these assaults as just a new form of online trolling in the wake of our dramatically increased virtual presence since the outbreak of COVID-19, these authors demonstrate that it is “a specifically racialized and gendered phenomenon that targets Black people and communities with racialized and gendered harassment.”  A survey of news stories over the past year offers growing evidence of these virtual strikes on events by and about African Americans.  Purveyors of white supremacy have always been willing to adopt new media with which to carry out their racist attacks.  From the Ku Klux Klan’s use of the film Birth of a Nation in the early twentieth century to the neo-Nazi embrace of the Internet in our own, white supremacists have shown a willingness to be at the cutting edge of technological change.  Even so, they exhibit the same dark intent, the same patterns, the same cowardly spirit they have always shown.  As one of my colleagues notes, Zoombombing demonstrates the “sadly evergreen resiliency of white supremacy.”  That is why Nakamura, Stiverson, and Lindsay title one of their chapters: “New Platform, Same Racists.”