The Original Storming of the Capitol

STEPHEN DANDO-COLLINS is the award-winning author of 44 books, the majority dealing with ancient history. His next book, Conquering Jerusalem: The Roman Campaign to Crush the AD 66-73 Jewish Revolt, (Turner), to be published in the US in July, deals in part with the conflict between Vespasian and Vitellius. 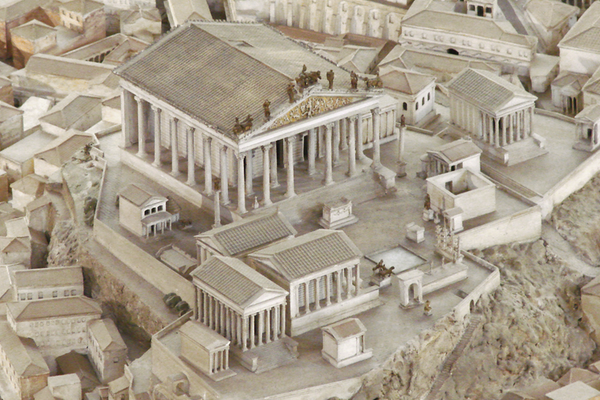 Thomas Jefferson, third president of the United States of America, gave the name Capitol Hill to the site of the US Congress in Washington DC, in a reference to the Capitoline Mount, or Capitol Hill, of ancient Rome. The most sacred place in Rome, this hill was the site of several temples, including that of Juno Moneta, containing the state mint, from which we derive the words money and monetary, and the 509 BC Temple of Jupiter Best and Greatest, the largest and most revered temple of Rome. The Capitol’s innermost sanctuary was called the Asylum, and here, traditionally, any Roman could expect to be safe from arrest or injury.

By December, AD 69, after a year of bitter civil war, two men vied for the title of emperor of Rome – the sitting emperor, Vitellius, who had taken the throne by force, and Vespasian, a general whose forces were advancing through Italy toward Rome. On the evening of December 19, Vespasian’s elder brother Titus Flavius Sabinus, head of Rome’s police, was convinced by senators to occupy the walled Capitol complex until Vespasian’s forces arrived.

Up until this time Sabinus had been the most prominent member of the Flavian family, with a distinguished record as a general in the invasion of Britain, a provincial governor for seven years, and a longtime senior civil servant at Rome. He had served as City Prefect, commanding the City Guard, the daytime police of Rome, and the Vigile Cohorts, or Night Watch, the nighttime police and fire department of the city, for a dozen years under several different emperors.

Considered gregarious, though just a little boastful, Sabinus was nonetheless respected by all sides of politics, and this had encouraged Vitellius to keep him in his job as a tempering influence when he became emperor. But as the troops of Sabinus’ brother had come closer to the capital with each passing day, Sabinus and other relatives and friends of Vespasian had found themselves under close watch by agents of Vitellius. The possibility that he would wake one morning to find the Praetorian Guard pounding on his door with orders from Vitellius to arrest him, finally drove Sabinus to relocate to the Capitol on the evening of December 19.

There, he was joined by family members including Vespasian’s teenage son Domitian and his own sons, daughter and grandchildren, senior senators including Quinctius Atticus, who was one of the two current consuls and the sitting president of the Senate, as well as leading citizens including several prominent women, and a mixture of troops from the City Guard and Night Watch who closed the Capitol gates and took up sentry duty to protect Sabinus and the senators. From the Capitol, Sabinus sent messengers to his brother’s army as it advanced on Rome, urging its commanders to hurry.

All remained quiet overnight, with the sacred and traditionally inviolate nature of the Capitol being considered protection enough for those inside. Only once in Roman history, despite Rome being sacked by several invading armies, had the Capitol been violated, and only then after Tarpeia, daughter of the Roman commander, had treacherously opened a Capitol gate from the inside to allow the enemy to swarm in. And she had paid for her betrayal with her life.

But, the following day, December 20, things changed. From the Rostra, the official speakers’ platform in the Forum, Vitellius addressed a noisy assembly of troops fiercely loyal to him. As thousands of off-duty soldiers subsequently marched on the Capitol in riotous disorder, Vitellius retreated back inside the palace.

“The infuriated soldiery arrived, without any leader, every man acting on his own impulse,” says Roman historian Tacitus, and they lay siege to the Capitol gates, first from one direction, then from another. Elsewhere, attackers scaled buildings to gain admission. As the mob burst in here and there, Sabinus and his defenders pulled back, toppling statues to create barricades. At the same time Sabinus urged his troops not to shed the blood of fellow Romans in their defense of the Capitol.

That defense held until a fire broke out within the Capitol complex. With the fire at their backs, some of the ill-prepared and poorly trained City Guard and Night Watch police gave way, and soon many made no effort to stop the insurgents, surrendering their arms. Four officers who stood firm and tried to defend the senators were cut down by the insurgents. As Vitellius’s out-of-control mob rampaged through the burning Capitol, looting, vandalizing, and destroying, Domitian and Sabinus’s other family members, along with numerous senators and their staff, were smuggled away to safety.

But Sabinus and the Senate president Atticus were captured and dragged before Vitellius in chains. Despite Vitellius claiming that bloodshed had not been his intent and his men had gotten out of hand, the mob murdered Sabinus before his eyes. But when Atticus spoke up and said that he had in fact started the fire on the Capitol to help the insurgents, and had been a secret supporter of Vitellius all along, he was praised by Vitellius and released.

The storming of the Capitol changed nothing.  Within days, Vespasian’s army reached Rome and fought its way into the city. A whimpering Vitellius hid in a doghouse before being captured and executed. The shocked Senate met, and certified Vespasian as the new emperor of Rome. His reign ended a divisive civil war and returned stability to the empire.